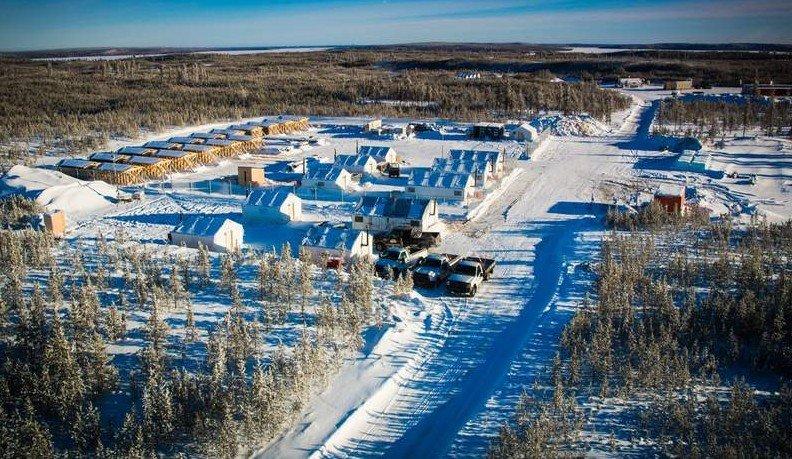 The summer 2017 exploration program is now complete. Drilling focused on both zone growth of the recently discovered R1515W zone as well as Pre-Feasibility “PFS” level drilling for metallurgical sample collection and geotechnical rock analysis. A total of 2,626m was drilled in 7 completed holes and 1 abandoned hole on the R1515W zone, with 6 of the 7 holes intersecting anomalous mineralization. PFS drilling included a total of 811m in 3 holes drilled for metallurgical sample collection and 614.4m in 3 completed (and 1 abandoned) geotechnical rock holes.

“As we had hoped, following the very successful results from previous holes, the presence of multiple stacked lenses at the R1515W zone has again delivered impressive mineralization that is wide, high-grade and shallow. The R1515W, 2.3km west of the Triple R deposit’s central area, will remain a high-priority going forward. The land-based mineralized zones, west along strike of the Triple R deposit, are particularly important as they have the potential to enhance the economics of the PLS project.”

The on-land R1515W zone is located within the Patterson Lake Corridor along strike to the west of the R840W zone. A total of 15 holes, 12 of which are mineralized, have traced mineralization over a strike length of 92m, a lateral across-strike width of up to 63m wide (line 1545W) and a vertical extent of 178m (line 1545W). Mineralization begins at the top of bedrock, which occurs at 100m depth below surface. The lithologic setting which hosts the mineralization is similar to other zones of the Patterson Lake Corridor, being an overall package dominated by a quartz+feldspar+biotite+garnet gneiss with intercalated steeply south-dipping intervals of silica+sulphide+graphite bearing mafic gneiss. Mineralization occurs within strong hydrothermally altered, structurally controlled sections interpreted as multiple stacked intervals that appear to be parallel to each other and parallel to the mafic gneiss. As is the case particularly with the R780E zone, mineralization morphology is a complex geometry controlled by and parallel to steeply south-dipping lithological boundaries as well as a preferential sub-horizontal orientation.

PLS17-567 (line 1575W) – Collared as an angled hole, 30m west of line 1545W, no anomalous mineralization was encountered. It is possible that may be encountered further north of this target area.

Natural gamma radiation in drill core that is reported in this news release was measured in counts per second (cps) using a hand held RS-121 Scintillometer manufactured by Radiation Solutions, which is capable of discriminating readings to 65,535 cps. Natural gamma radiation is also collected from an in-hole survey that is measured in counts per second (cps) using a Mount Sopris 2GHF-1000 Triple Gamma probe, which allows for more accurate measurements in high grade mineralized zones. The Triple Gamma probe is preferred in zones of high grade mineralization. The reader is cautioned that scintillometer readings are not directly or uniformly related to uranium grades of the rock sample measured, and should be used only as a preliminary indication of the presence of radioactive materials. The degree of radioactivity within the mineralized intervals is highly variable and associated with visible pitchblende mineralization. All intersection measurements are down-hole. All depths reported of core interval and down-hole gamma measurements including radioactivity and mineralization intervals widths are not always representative of true thickness and true thicknesses are yet to be determined in zones outside of the Triple R deposit. Within the Triple R deposit, individual zone wireframe models constructed from assay data and used in the resource estimate indicate that both the R780E and R00E zones have a complex geometry controlled by and parallel to steeply south-dipping lithological boundaries as well as a preferential sub-horizontal orientation.

Uranium mineralization at PLS occurs within the Patterson Lake Conductive Corridor and has been traced by core drilling approximately 3.18km of east-west strike length in five separated mineralized "zones". From west to east, these zones are: R1515W, R840W, R00E, R780E and R1620E. Thus far only the R00E and R780E have been included in the Triple R deposit resource estimate, where-as the R840W and R1620E zones and the recent addition of the R1515W zone, fall outside of the current resource estimate window.

The discovery hole of what is now referred to as the Triple R uranium deposit was announced on November 05, 2012 with drill hole PLS12-022, from what is considered part of the R00E zone. Through successful exploration programs completed to date, it has evolved into a large, near surface, basement hosted, structurally controlled high-grade uranium deposit.

Updated maps and files can be found on the Company’s website at http://fissionuranium.com/….

The 31,039 hectare PLS project is 100% owned and operated by Fission Uranium Corp. PLS is accessible by road with primary access from all-weather Highway 955, which runs north to the former Cluff Lake mine and passes through the nearby UEX-Areva Shea Creek discoveries located 50km to the north, currently under active exploration and development.

The technical information in this news release has been prepared in accordance with the Canadian regulatory requirements set out in National Instrument 43-101 and reviewed on behalf of the company by Ross McElroy, P.Geol., President and COO for Fission Uranium Corp., a qualified person.

Fission Uranium Corp. is a Canadian based resource company specializing in the strategic exploration and development of the Patterson Lake South uranium property – host to the class-leading Triple R uranium deposit – and is headquartered in Kelowna, British Columbia. Fission’s common shares are listed on the TSX Exchange under the symbol "FCU" and trade on the OTCQX marketplace in the U.S. under the symbol "FCUUF."

NEW WAYS OF COMMUNICATION AND FINANCING FOR RESOURCE COMPANIES IS OUR MISSION! TRANSPARENCY, QUALITY AND EDUCATION OUR BOOSTER!

The world finance system is facing massive uncertainty and risk making it imperative that one has wide-ranging knowledge about alternative investment opportunities. Ensure your financial future by taking control. Diversification is the means to survive the current and future market difficulties with a specific focus on value investing such as quality stocks, precious metals and resources in general.

Swiss Resource Capital AG is your partner entering the mining industry. We also work very closely with successful investment funds and asset managers. SRC has a worldwide professional network of experts and unique access to financings, allowing investors to be part of a company at early stages. Ongoing analysis, monitoring and contact with the management and site visits of selected projects keeps us abreast of promising investment opportunities in the resource sector. Our news distribution system keeps you all the time informed and up to date about the latest developments.

We assist you and deliver clear and concise information pertaining to the precious metals and the resource sector as well as selected mining companies. Through our new developed multimedia channels like the exclusive Resource-TV you have access anytime and anywhere in the world to comprehensive data and information as well as access via our log in function to the free research area of our website.

Via exclusive events and one-on-one meetings we offer interested investors in many countries the opportunity to get direct information from and personal access to the management of various mining companies. We make sure that you know what we know!