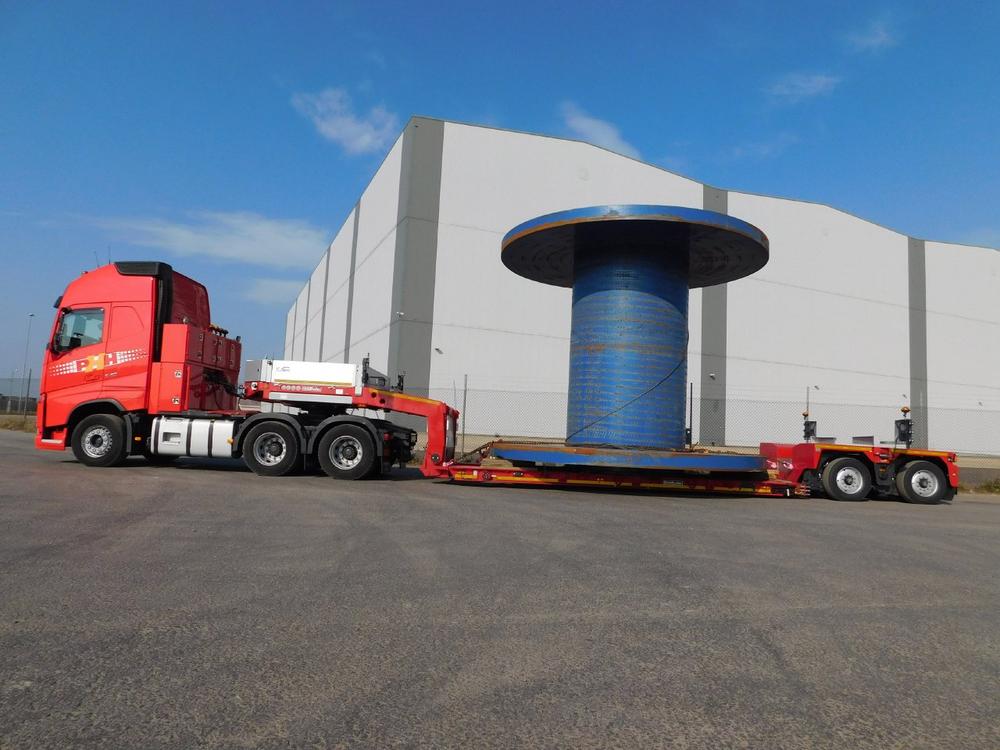 28. August 2017 Firma GoldhoferLogistikaxle, cranes, excavator, flat, fu?r, machines, services, stz, trans, trent, vehicle, vessel, wafer, wheel, with
Potteries Heavy Haulage Ltd. of Stoke-on-Trent/GB, a specialist in international heavy and abnormal load haulage, has added a Goldhofer STZ-VP 2 wafer deck low loader to its everincreasing trailer fleet. The choice was influenced by such factors as low deadweight and the short bogie and above all by the flexibility offered to handle the UK company’s wideranging operational requirements. "Apart from the usual cargoes like pressure vessels, generator sets, structural components and machines, we also transport industrial plant. In addition, our transport portfolio includes boats and construction machines such as excavators and cranes. In the light of this extensive range of haulage services, the STZ-VP 2 is the perfect answer to our need for an almost universal low loader," says Rob Powell, Operations Manager at Potteries Heavy Haulage. "We also benefit from the high payloads made possible by the low deadweight and from the high standard of vehicle safety and good tracking performance."

With a fifthwheel load of 23 tons, the highly versatile STZ-VP 2 features a 22cm deep extendable low profile deck with outer beams and inserting floor for use as a flat bed or vessel deck. Plus it has additional coupling points to take more beams and increase the overall lower deck length, as well as a deep and wide excavator/vessel recess in the rear bogie. The hydraulic gooseneck is fabricated with outer beams, so when transporting boats, for example, that means the bow can be positioned further forward. The bogie is Goldhofer’s tried and tested twoaxle pendular axle bogie with a loading height of 1,100 mm. Thanks to a suspension stroke of up to 600 mm and a maximum steering angle of 60 degrees, construction site access is never a problem in even the most difficult cases.

Goldhofer is one of the world market leader for transport equipment in the field of general and heavy-duty road haulage and oversized cargo transportation. With a full and proven range of products, Goldhofer meets an extremely wide variety of needs in almost every transport situation. In a facility occupying about 100,000 square meters of grounds, the Goldhofer company has more than 650 employees producing perfectly engineered vehicles with payloads varying between 25 and 10,000 tons for demanding customers around the world. The history of Goldhofer Aktiengesellschaft goes back to 1705. In 2013 Goldhofer acquired Schopf Maschinenbau GmbH, thus further expanding its product portfolio in the fields of civil and military aviation and the mining industry.