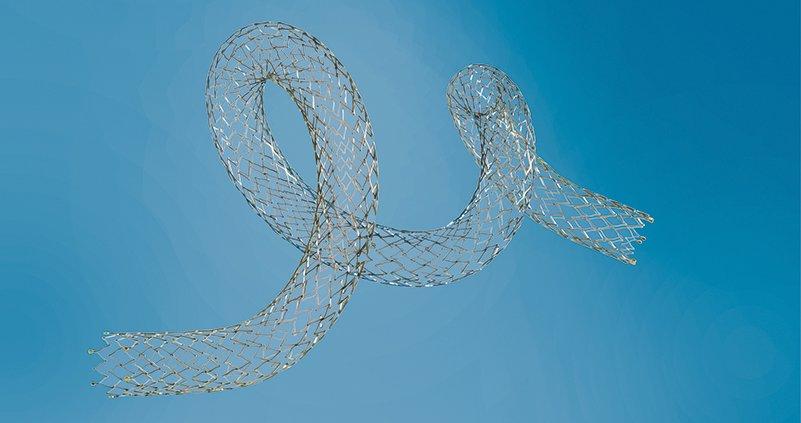 In-stent restenosis remains one of the most challenging aspects of SFA treatment. Reducing the stent (metal) load may lead to reduced restenosis rates. During a well-attended session on reducing metal burden chaired by Dr. Jos van den Berg, Ospedale Regionale di Lugano, Switzerland, discussions centered on clinical options to treat SFA lesions with reduced or no metal burden. The symposium included a presentation of clinical results from an extensive “drug-coated balloon (DCB) only” registry as well as studies focusing on the combined use of DCB and a low chronic outward force (COF) stent. The session also covered the clinical impact of COF in nitinol stents.

Dr. Martin Funovics, Medical University of Vienna, Austria, presented results from preclinical data on the use of low COF vs. high COF stents. This was further supported by the interim results of the BIOFLEX COF randomized controlled trial (RCT), which established that lower COF results in lower restenosis rates for the first time ever in a dedicated RCT. This could be pivotal in changing the way that physicians plan treatment of SFA disease when implanting self-expanding stents. The innovative methodology of evaluating efficacy using “normalized, cumulative percent restenosis” offers an accurate way to systematically assess restenosis with a higher sensitivity and specificity than the traditional Doppler ultrasound method for the
first time.

The all-comers stenting registry BIOFLEX PEACE, which investigated the Pulsar-18 stent, was presented by Dr. Claus Nolte-Ernsting, Muelheim, Germany, on behalf of Dr. Michael Lichtenberg, Klinikum Arnsberg, Germany. The registry demonstrated that in a real-world setting, physicians are aware of the higher COF/higher restenosis link. This is a shift from the established 1-2 mm that has been followed in the last decade. Reducing stent oversizing is a simple method to reduce the COF of the implanted stent. A primary patency rate of 86.2 percent and an fTLR rate of 97.1 percent despite a lesion length of 11.6 cm appear to indicate improved outcomes.

Dr. Gunnar Tepe, Institute of Radiology, Rosenheim, Germany presented results from the long-awaited Passeo-18 Lux all-comers registry BIOLUX P-III, which enrolled over 700 patients with SFA lesions. A primary patency rate of 84.9 percent and fTLR rate of 94.5 percent clearly indicate the success of the Passeo-18 Lux. Despite the high moderate/severe calcification rates of 41.7 percent in lesions with an average length of 9.4 cm, the bailout stenting rate was only 20 percent.

BIOLUX 4EVER, a novel study designed to challenge the need for an SFA drug-eluting stent (DES), looked into the use of full-lesion coverage with a DCB followed by a bare metal stent (BMS). Presented by Dr. Koen Deloose, AZ Sint-Blasius Hospital, Dendermonde, Belgium, the Passeo-18 Lux and Pulsar-18 study devices generated a primary patency rate of 89.9 percent at 12 months in average lesion lengths of 8.3 cm. At the 24-month follow-up, primary patency was numerically higher with the DCB and BMS than with the DES. Although these were the interim results from 85 of 120 patients, the primary patency of 84.1 percent reported compares favorably to reported DES results of 78.2 percent1 and 74.8 percent2.

Exploring how to translate all the presented data into clinical practice, Dr. Ralf Langhoff, Sankt-Gertrauden Krankenhaus, Berlin, Germany, shared a treatment strategy algorithm based on clinically available evidence on the Passeo-18 Lux DCB, the Pulsar-18 BMS and the combined use of both. Starting treatment with the Passeo-18 Lux, the physician can decide whether the lesion also needs to be stented based on the response to the DCB. To test this algorithm, he further proposed an outline for a trial.

Dr. van den Berg concluded by stating: “The emergence of drug-coated balloons has revolutionized SFA intervention by eliminating or reducing the need for permanent metallic implants. However, adjunctive stents are still required to scaffold the vessel wall.” He went on to explain that “as the presence and amount of metal may contribute to inflammatory response3, potentially leading to restenosis, it seems logical that using thin-strut, low COF stents such as Pulsar is one way to reduce the metal burden.” Furthermore, Dr. van den Berg stated: “Adopting a reactive approach gives us the opportunity to reduce metal burden by only implanting the stent length that’s needed, while benefiting from the anti-proliferative effect of DCBs. This versatility is, for example, not possible
with DES.”

A global leader in cardio- and endovascular medical technology, BIOTRONIK is headquartered in Berlin, Germany, and represented in over 100 countries. Several million patients have received BIOTRONIK implants designed to save and improve the quality of their lives, or have been treated with BIOTRONIK coronary and peripheral vascular intervention products. Since its development of the first German pacemaker in 1963, BIOTRONIK has engineered many innovations, including Magmaris*, the first clinically-proven resorbable magnesium scaffold; BIOTRONIK Home Monitoring®; Pulsar-18, the world’s first 4F compatible stent for treating long lesions; Orsiro**, the ultrathin 60 micron drug-eluting stent; and the world’s first implantable cardioverter defibrillators and heart failure therapy devices with ProMRI® technology.