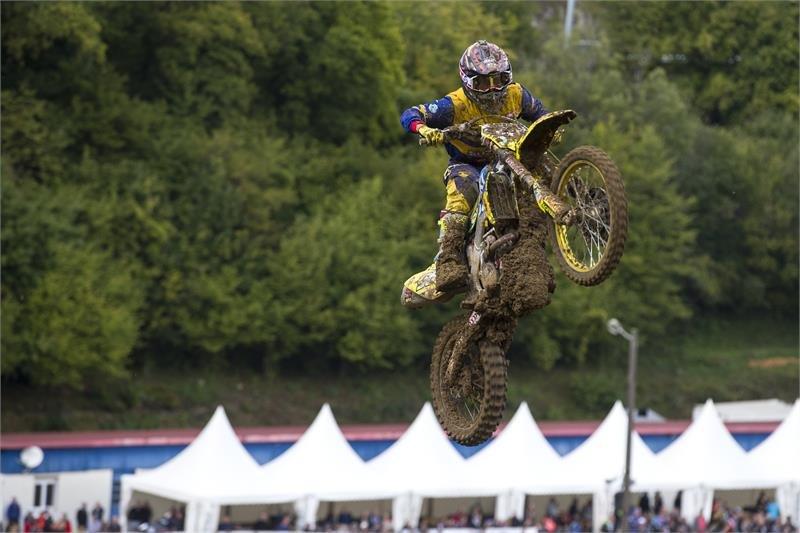 Hunter Lawrence finished off the season on a high note for everyone involved in the Suzuki World MX2 team as the young Australian won his first ever moto, at the MXGP of Pays de Monbeliard. In horrible conditions, Lawrence took a great start on board his RM-Z250 and never looked back, pulling a gap on the rest of the field as they struggled to match his pace in the slippery mud.

After a fourth in the first moto, this victory was good enough to give him second overall and his second podium in the last three rounds. Jeremy Seewer almost joined his teammate on the box, just losing out on the final lap as he made a last-ditched attempt to win the GP. Instead, the Swiss rider finished fourth overall, which also confirmed his position as runner-up in the MX2 World Championship. Unfortunately, for the third team member Zach Pichon, his afternoon was cut short after he twisted his knee in a rut midway through the first race.

For Lawrence though it was a great ending to what was a very promising rookie MX2 campaign. “I came into today really happy because I had first gate pick after winning qualifying yesterday. In the first moto it was quite wet, as a lot of rain fell so it was really muddy and slippery. It was really difficult conditions. I got a decent start though, and made some passes to come up to fifth and then fourth quite quickly. However, I couldn’t make a dent in the guys in front and finished fourth. In the second moto I went for the start, put it all in, and my RM-Z250 came out well on the inside and I held on to come out in the lead. I just then put my head down, put in my own laps and increased my lead and was really happy with how it all went. I’m really happy for the win and to end the season on a high note. I was pumped because Thomas Covington was closing in at the end because I was just trying to get it over the line at that stage. Leading a race is a whole different ball game from coming through the pack but I enjoyed it and now I get to look forward to the Motocross of Nations.”

Coming into the weekend, Seewer’s aim was to win the GP and hope that Pauls Jonass slipped-up enough for him to take the MX2 title. Neither happened in these treacherous conditions and the Swiss rider was left to reflect on his final MX2 race and a season that was wasn’t quite as good as he would have liked. “We had another mud race this weekend, a really bad one for us as there was a lot of rain yesterday and today again this morning. I wasn’t feeling right with the track, with all the hills and the mud and all the ruts. I got a good start in the first moto though which really helped; Covington was a bit faster, he made no mistakes so I was happy with second place. Then in the second moto I got too much wheel-spin on the mesh which was just strange because I did exactly the same start in the first moto and didn’t get any spin. I was far back on the start-straight because of this but I made a lot of quick passes and got it back to fourth and then set about passing Covington. I got up to second before Covington passed me back after a couple of poor laps. I kept pushing though and at the end of the race I saw an opportunity to win the GP, so I gave it everything I had to pressure him into a mistake but coming down the steep downhill my front wheel slipped away and I had a crash. I didn’t hurt myself, but the bike made a couple of flips. I thought it was worth it to try and win the GP, it just didn’t quite work out ok. A big thanks to the whole Suzuki World MX2 Team, they put in a lot of work to get me to the front of the pack each weekend and get me challenging for the title. I’m disappointed with second overall in the championship but Jonass rode great all year, so congratulations to him. I went to him after the first moto just to say to him “well done” because he did really well with the pressure and rode consistently fast the whole season long.”

For only his second MX2 race, Pichon hoped for nicer conditions at his home GP and it was those conditions that led to his downfall as the muddy track got really rutted up. “Today was difficult as we had a lot of rain this weekend so it really wasn’t easy. I had a good start in the first moto, around 15th but then I crashed a couple of times. This made it even harder because of all the mud, which also got into my goggle. I tried my best though, however in the middle of the race I twisted my knee in one of the ruts so now we have to check with a doctor to see what I did. This is why I didn’t line up for the second moto.”

General Manager Stefan Everts then gave his thoughts on what was a really gruelling 19-round season. “The chance of winning the MX2 title coming into this final round was really small but Jeremy did a good first moto even if it wasn’t enough to take the victory. Jonass won the title so congratulations to him because he rode well and fully deserved the win. It would still have been nice to have got the GP win though and Jeremy could have got that if he didn’t make the mistake at the end of the race. He tried hard, just as he has all year, but it didn’t quite work out. It would have been good to have him join Hunter on the podium, to have both riders on there in the final GP, but it was just Hunter and that was still great to see. And it is especially nice for Suzuki to win the last race of the year. He felt good all weekend long, he put in his best-timed practice, he won the qualification and now he went out and won his first moto. He controlled the race, he made it look easy and got his third podium of the year. He made good progress during the season and overall had a good season.”

With the season now over, the team can now enjoy a mini-break before the Motocross of Nations where Lawrence will be riding the RM-Z250 for Team Australia, with Seewer stepping-up to the RM-Z450WS for Switzerland. Both riders can be extremely proud of their efforts this year and how well they represented the brand both on and off their motorcycles.