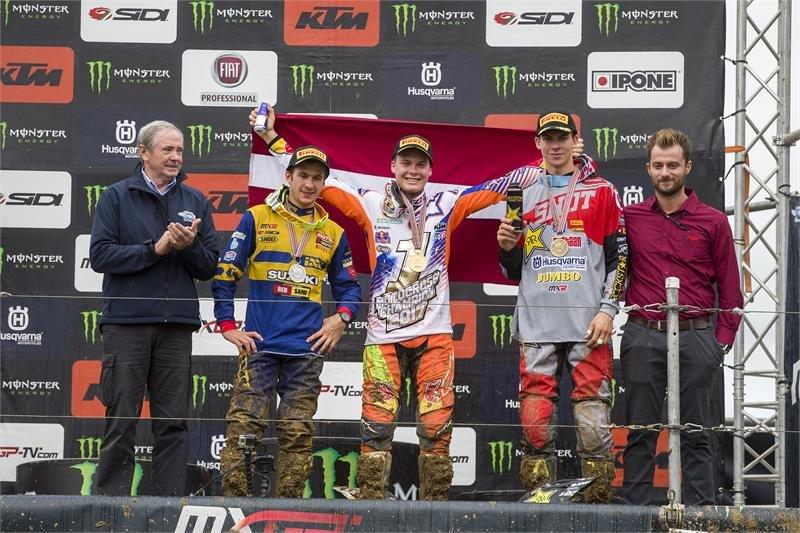 Hunter Lawrence took his maiden qualification win for the Suzuki World MX2 team, grabbing his first holeshot and checking-out in what were very tricky conditions at the hilly Villars-Sous-Ecot track in France. Heavy rain showers soaked the track before the moto but after a good timed practice, Lawrence and teammate Jeremy Seewer both had good gate picks and good starts in the race as the mud flew all around them. Zach Pichon also rode well for his 14th place finish as the French rider once again stepped-up in the MX2 class.

In the MXGP class, Kevin Strijbos continued his run of fifth place finishes and will head into Sunday’s moto full of confidence that he can go even better if he can avoid the misfortune of a rock hitting his goggles.

For Lawrence, it is a great way to start the final GP of the year in what has been a very impressive rookie campaign. “I got a great start on my RM-Z250, taking the holeshot and leading the way round the first few bends. I was pretty pumped to have got that good start, so I put my head down and made sure to hit my lines and keep everyone behind me. I have been feeling good all day as I love the track and all the ruts. Everything seems to have gone well today, I just hope we can keep it going tomorrow because it was such a good feeling to take the victory.”

After a pair of fifth places at Assen last weekend, Strijbos once again got that top-five finish at this completely different track in France. “Qualification was good today. I got a decent start, despite being a little bit too late reacting to the gate. I managed to go well through the first corner though, which was good. From there on I had a steady race, I didn’t have to take any risks which on a tricky track like this was good. At one point, I got a rock on the roll-off and that broke it but I was still able to get fifth. I’m happy to have finished in that position because it was so easy to make a mistake and finish in the back, so again fifth like the last few races. I don’t think we’re going to change anything for the main motos tomorrow as everything felt good on my RM-Z450WS.”

Things didn’t quite go as well for Seewer as he also struggled with goggle problems but tomorrow should go a lot better for the MX2 title challenger. “It was a really muddy track today”, said Seewer. “I got a good start and was running third early and the track wasn’t too bad. I tried to stand a lot but made a mistake and then had problems with the peak of my helmet and my goggles. I crashed again, otherwise I would have still be in the top three. I’m a little frustrated but I feel like I can do a lot better tomorrow.”

With Bas Vaessen still nursing his collarbone injury, Pichon stepped into his MX2 spot and acquitted himself really well at his home GP. “It was a good race. I had a really good start; inside the top five but the first few laps I got a lot of mud on my goggles. I didn’t want to take them off as I still of the race to go and it was still very muddy. I kept them on too long I think, and by the time I took them off I had dropped a few places. When I took them off I gained some seconds, followed Jorge Prado for a couple of laps and had a battle with Thomas Kjer Olsen. I ended up 14th which I am very happy with.”

So, a successful race day for the Suzuki World squad of riders, who now head into tomorrow’s races with confidence that they can end the season on a really positive note. With the weather changing all the time, conditions won’t be known until the gate drops but after this qualifying day, they will be ready to tackle anything the Villars-sous-Ecot track can throw at them.