A Tremendous Honour for an Outstanding Businesswoman 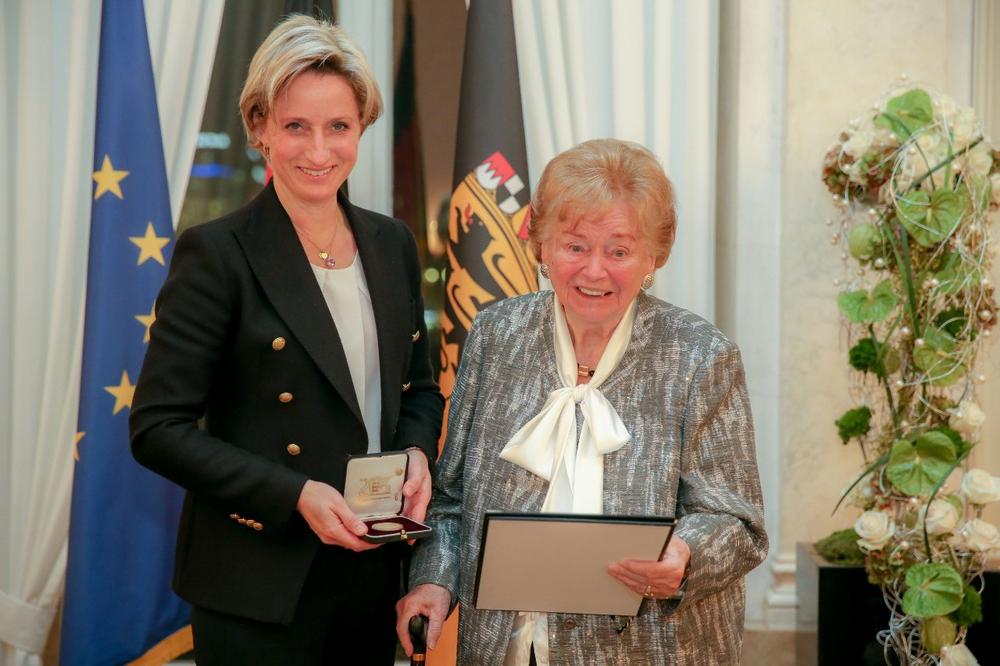 27. November 2017 Firma U.I. LappEvents
During a ceremony at the former royal palace in Stuttgart, Baden-Württemberg economic minister Dr. Nicole Hoffmeister-Kraut awarded the state’s business medal to Ursula Ida Lapp. The medal represents a tremendous honour bestowed on an outstanding businesswoman. Among the federal state’s most prestigious honours, it is awarded only to people who have made an outstanding contribution to the economy of Baden-Württemberg.

"With diligence, ambition and perseverance, you and your family have created a company of international renown over the past 58 years. You are open, interested person and you participate in the lives of your fellow human beings. Your varied and considerable social and entrepreneurial achievements are to be particularly emphasized. For this reason, it is a particular pleasure for me today to personally hand over the business medal to you”, Minister Hoffmeister-Kraut emphasized in her laudation.

An entrepreneur through and through, Ursula Ida Lapp has made German business history. Together with her husband Oskar Lapp (1921-1987), she channelled her passion, energy and understanding of the industry’s requirements into founding a company of international renown. Today, the Lapp Group employs approximately 3,440 people around the world and has 17 production sites and 40 distribution companies. The company also works in cooperation with around 100 foreign representatives.

The first chapter of the Stuttgart-based Lapp Group’s success story was written at the end of the 1950s. Ursula Ida Lapp’s husband Oskar Lapp was a gifted inventor and innovator. When the company started out, single cores and strands had to be inserted into cables by hand, a time-consuming task. Oskar Lapp set to work developing the first industrially produced oil-resistant and flexible control cables that used different colours to distinguish cable cores. Another innovation followed: the ÖLFLEX® brand name for the invention. Coined by the Lapps, the name became synonymous with extremely oil-resistant and flexible cables.

U.I. Lapp KG was founded in 1959 with initial capital of DM 50,000. U.I. stands for Ursula Ida. The fledgling company was based in the couple’s garage in the Vaihingen suburb of Stuttgart. Oskar Lapp took on the role of a sales representative and visited customers, while Ursula Ida Lapp remained in the home as the couple’s three sons were still young. In the evenings, she wrote advertising letters and took care of the bookkeeping. She often drove to the freight depot with a cart to pick up the ordered cables (which were delivered in bundles), label them and then send them off on their onward journey straight away.

ÖLFLEX® delivered the right product at the right time. The Lapps set quality standards that are still applicable around the world today in the field of cable production. Their company’s product range even offered ready-made cables containing up to 130 coloured cables. Demand was huge. In 1963, the company opened the first factory of its own to produce ÖLFLEX® cables. Two years later, in 1965, it moved to Schulze-Delitzsch-Straße in Vaihingen, where the headquarters of the successful group remain to this day.

Following Oskar Lapp’s death in 1987 after a long battle with a heart condition, Ursula Ida Lapp took over leadership of the company together with her sons Siegbert and Andreas. Under her aegis, the firm continued with its expansion outside of Germany. Today, the Lapp Group is the global market leader for integrated solutions in the field of cable and connection technology. The Group’s product range includes standard and highly flexible cables, industrial connectors and cable entry systems, customised and standard system solutions, automation technology and robotics solutions for the intelligent factory of the future, as well as technical accessories. The Lapp Group’s core market is in the industrial machinery and plant engineering sector. Other target markets are in the food industry, along with the energy and the mobility sector. The Lapp Group was awarded the TOP 100 seal in 2016 for its innovations.

Ursula Ida Lapp played a key part in shaping the company’s philosophy. The international family-run enterprise nurtures and practises a corporate culture that is unmistakably its own and lives according to its values of customer focus, informality, innovation and a passion for success. Other focal areas include sustainable business practices and responsibility for employees. Acknowledgement came in the form of an award from the German Federal Ministry for Family Affairs, Senior Citizens, Women and Youth: in 2016, Lapp was the winner of the "Family as a success factor" competition for mid-sized firms.

Ursula Ida Lapp upholds the principles of corporate social responsibility, an ethos born out of conviction. She and her sons founded the Oskar Lapp Foundation in 1992 in memory of Oskar Lapp to support research into heart disease. The construction of the “Bürgerhaus” community centre in the Stuttgart suburb of Möhringen was also possible only due to the Lapp family’s generous support. Ursula Ida Lapp’s sons are following the example that she has set. Siegbert Lapp was co-founder of the organisation Kind e.V. and has been active for many years in promoting improved care services for children of working parents. Andreas Lapp is Honorary Consul of the Republic of India for Baden-Württemberg and Rhineland Palatinate.

The company is wholly owned by the Lapp family, and two of Ursula Ida Lapp’s grandchildren have now joined the firm. She herself remains Honorary Chairwoman of the Supervisory Board at Lapp Holding AG and U.I. Lapp GmbH.