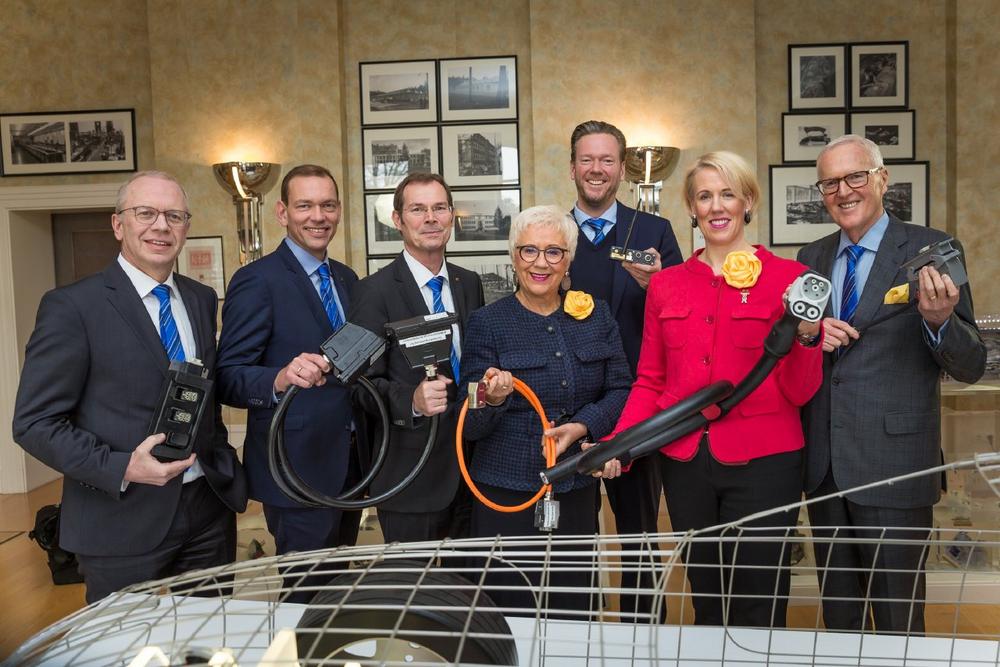 The HARTING Technology Group in Espelkamp (Kreis Minden-Lübbecke) massively increased its turnover for trading year 2016/17 (to 30 September). The family owned and managed global company saw a 14.7% in turnover, taking it up to €672 million (previous year: €586 million) – the highest figure in the company’s 72-year history. The increase exceeded the Management Board’s forecast at last year’s annual press conference in December 2016 by some way.

“We are really pleased with the growth in business”, enthused Company Chairman Philip Harting. “We are still on course towards becoming a global company. More than ever before, our success relies on our global corporate network of development, production and distribution companies. Customers see our products as some of the world’s best connectivity solutions and services in our industry.”

The transport technology, machine manufacturing and automation and robotics markets were the main drivers for turnover. All of the regions where HARTING has a presence contributed to the Group’s positive results. Turnover went up 12% in Europe (excluding Germany) and the Middle East (EMEA), reaching €225 million (previous year: €201 million). But the biggest increase was seen in Asia/Pacific and the Americas regions – each showing a 22% rise. Turnover went up to €158 million (previous year €130 million) in the Asia/Pacific region and €73 million in the Americas region (previous year €60 million). And business growth in Germany was also really positive. “I am particularly pleased that we have gained ground in our home market”, said the Chairman of the Board. At home, Technology Group turnover went up 11% to €216 million (previous year €195 million). The Technology Group generated two thirds of overall turnover outside Germany (67.8%, previous year: 66.7%).

Investment in in development, production and sales

The Technology Group is progressing its international growth strategy and extending its global production network, with new plants in Chennai (India) and Agnita (Romania). There was also major expansion in Sibiu. Components for charging points for electric cars are manufactured in Sibiu and Agnita.

HARTING produces encapsulated cables and cable harnesses at the new plant in Silao, Mexico. Following the initial “ramp-up phase”, staff numbers are scheduled to be increased significantly from the current 35 over the next three years. Mexico is the partner country for HANNOVER MESSE 2018. “And we are expecting plenty more momentum from this”, says Philip Harting.

Boost for Espelkamp and Rahden sites

Alongside expansion abroad, HARTING is also investing in its sites in Kreis Minden-Lübbecke. “We invested a total of around €45 million over the last trading year – a major proportion of it on projects in Espelkamp and Rahden. This is a clear commitment to the region”, said Maresa Harting-Hertz, Vice President Finance and Purchasing. The new business HQ for HARTING Customised Solutions (HCS) was opened in Espelkamp, the HARTING Development Center (HDC) was acquired in Rahden and investments were made in machines, facilities and numerous digitalisation projects. The HARTING Development Center is now home to development skills for Industry 4.0.

The biggest chunk of investment money went into the new European Distribution Center (EDC) in Espelkamp, where construction started in spring. Several months of trial operations are scheduled to start at the end of 2018, with completion planned for 2019.

An important milestone project for sales is the development of the HARTING Digital Business Platform (HDBP). The new software architecture links the HARTING website,
eshop, ecatalogue and Customer Relationship Management with a high-performance sales and customer platform, says Philip Harting. The HDBP is scheduled to go live this weekend (9/10 December 2017).

Strong turnover growth and investment in the future have had a positive effect on personnel development, explained Dr Michael Pütz Senior Vice President Human Resources. The number of employees (including trainees) rose to 4,639 in the 2016/17 trading year (previous year: 4,286) – an increase of 8.2%. 104 (4.3%) new jobs were created in Germany, and 249 (13.2%) new people were taken on at international production plants and subsidiaries. As of 30 September 2017, a total of 2,500 people were working at German HARTING locations (Espelkamp, Minden and Rahden) and the overseas figure stood at 2,139.

Outside recognition for personnel development

Training and further professional development have enjoyed high status at the Technology Group for decades now. 152 commercial and technical/business trainees and dual students across 22 different professions are currently preparing for a future career at HARTING – twice as many as in 2009.

Numerous awards and excellent exam results are evidence of the high quality of training, as illustrated by Dr Michael Pütz Senior Vice President Human Resources. Pütz was delighted with the 45 trainees who graduated with an average grade of 2.0 (“more than ever before“) and when four trainees were honoured at an award ceremony in Bielefeld by the East-Westphalia Chamber of Commerce (IHK).

HARTING has overhauled the careers pages on the homepage to make the company an even bigger attraction to potential applicants: they’re fresh, bold, modern and inspiring. They also offer new digital services to simplify the application process.

Partner Margrit Harting talked about how the HARTING Technology Group always stands up to the competition, performing as an excellent employer and source of momentum for the local area. Awards from around the world for quality, products and sustainability and the Group’s local and regional commitments were the main drivers. “We cannot rest on our laurels and must continue to prove ourselves. This is the only way to the future and long-term security for the company and its employees,” concluded Margrit Harting.

Good starting position – but challenges, too

Chairman of the Board Philip Harting sees the Technology Group as being in a starting position overall and is looking forward to the next few months with confidence. But he did emphasise a number of challenges, however. According to Philip Harting, changes on the rail market and the possible impact on HARTING after the merger of the relevant divisions of SIEMENS and French competitor Alstom are not foreseeable at this stage.

The Technology Group will also be keeping a close eye on developments in the wind turbine market. Five of the top ten companies are based in China. “The leader of the German market is sensitive to the pressure on prices in this global environment.” Mobility is a similar source of opportunity, but also harbours risks due to changing production methods.

Brexit and all it entails also posed further challenges. Trading partners need to achieve clarity. HARTING UK is one of the Technology Group’s most important subsidiaries.

The company sees digitalisation as a major issue for German industrial policy over the next ten years. Everything that can be connected will be connected. HARTING addressed the issue closely at an early stage. “The company is highly aware of the consequences of the effect that digitalisation will have. We know that, in order to remain competitive, we need to digitalise all the necessary processes,” said the Chairman of the Board, taking a clear position at the annual conference and seeing it as the duty of the Federal Government to invest in the country’s digital infrastructure.

And the issue is being driven forward overseas. HARTING is also looking for momentum as a member of the Robotation Academy, founded in Foshan, Southern China in October, where around 1,000 industry representatives will be working on seminars and conferences on technology trends every year. ”We want to work with our customers to expand our Industry 4.0 skills and technology,” said Philip Harting. But he sees the increasingly strict Cyber Security Regulations in China as burdensome. And not just there – increasingly complex data protection rules and protectionist requirements are hampering free trade in other regions, too.

The Technology Group saw a positive start to the 2017/18 trading year. “Our gut feeling is good, as the order situation is good,” said Philip Harting optimistically at the annual conference, pointing to the automotive and other sectors. After VW, the HARTING Automotive subsidiary is now also a tier 1 supplier to the BMW Group.

”We started the new trading year with a good tailwind and are more optimistic about development than we were a year ago. But we remain vigilant,” stressed Harting. The Technology Group is anticipating a five to six percent increase in turnover for the current 2017/18 trading year – slightly above market growth.

The German Electrical and Electronic Manufacturers’ Association (ZVEI) is expecting a four percent growth in the global electrical market over the next calendar year.

HARTING Technology Group is one of the world’s leading providers of industrial connection technology for the three lifelines of Data, Signal and Power and has 13 production plants and branches in 43 countries. In addition, the company also produces retail checkout systems, electromagnetic actuators for automotive and industrial series use, charging technology and cabling for electric vehicles, as well as hardware and software for customers and applications in automation technology, robotics and transportation engineering. In the 2016/17 business year, some 4600 employees generated sales of EUR 672 million.