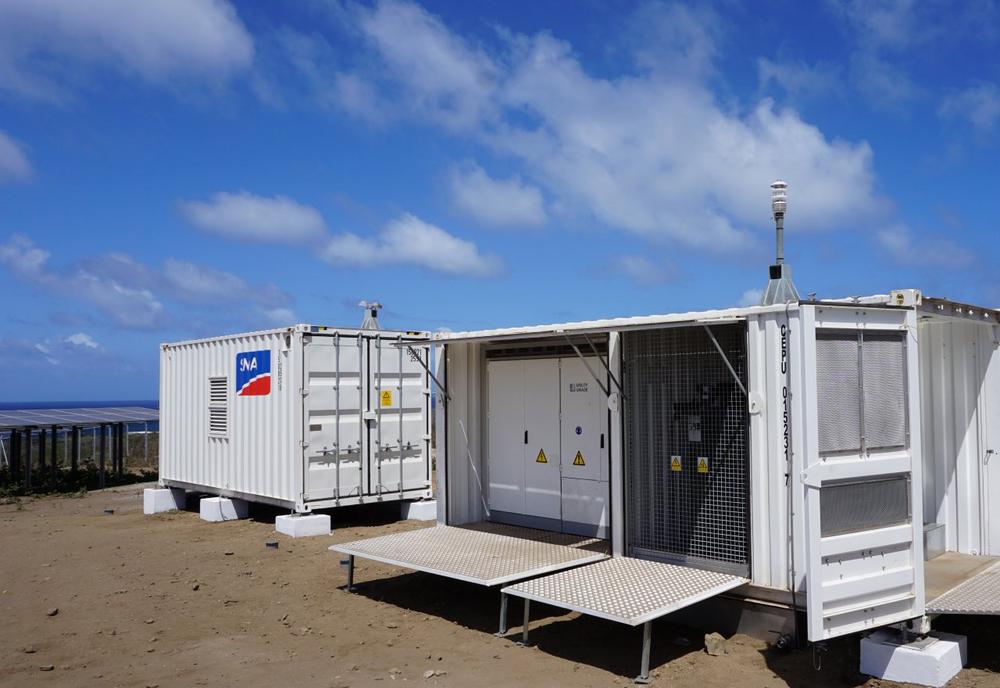 14. Dezember 2017 Firma SMA Solar TechnologyOptische Technologien
The sound of ocean waves instead of droning diesel generators: the energy supply to the Caribbean island of St. Eustatius is provided exclusively by clean solar power during the day. SMA Solar Technology AG (SMA) and its subsidiary SMA Sunbelt Energy GmbH have expanded the PV diesel hybrid system, which went into operation there last year. The use of the new Sunny Central Storage 2200 battery inverter with grid-forming characteristics makes it possible for the first time to switch off the diesel generators fully automatically without impairing the stability of the utility grid. The power of the PV farm has been doubled to 4.15 MW and the capacity of the battery-storage system has been expanded to approximately 5.9 MWh. This allows the local electric utility company, Statia Utility Company (STUCO), to save around 1.7 million liters of fossil fuel a year.

“The new SMA system combines solar power and a battery-storage system, and incorporates diesel equipment when necessary,” said Fabian Jochem, general manager of SMA Sunbelt Energy GmbH. “In a matter of milliseconds the system balances out the PV array’s power fluctuations, which are caused by the rapid cloud movements in this region in particular. Excess energy is temporarily stored in the batteries and is used in the evening.” At the heart of the system, the battery inverters initially take on the job of grid formation. This means that the diesel generators can be switched off completely during the day. The battery inverters stabilize the frequency and keep the reserve power, and thus enable a reliable electricity supply with European grid quality at all times. Thanks to comprehensive expansion of the function of the SMA Fuel Save Controller, including energy and power management in real time, synchronization between diesel operation and battery operation takes place intelligently and fully automatically.

Unique grid quality
“SMA’s system solution now makes it possible to completely switch off the diesel power supply to the island during the day without impairing the electricity supply to the roughly 4,000 inhabitants,” said Fred Cuvalay, chief executive officer of the electric utility company STUCO. “Even if the diesel generators fail during the night, the SMA system will provide the island with electricity without interruption. Thanks to the reduced use of the diesel generators, their operating hours as well as fuel consumption are reduced. This results in much lower maintenance costs, and the environment is saved from over 4,500 tonnes of CO2 every year. We are particularly happy with the high grid quality, which, since the installation of the system, has been considerably better than in the past with our fleet of generators.”

In 2010, St. Eustatius gained the status of a special municipality of the Netherlands. The Dutch Ministry of Economic Affairs decided to make the island and the Statia Utility Company (STUCO) less dependent on imported fossil fuel oils. Following the PV diesel hybrid system, which won the Intersolar Award for outstanding solar projects in 2016, the Dutch Ministry of Economic Affairs has also financed the expansion of this system.