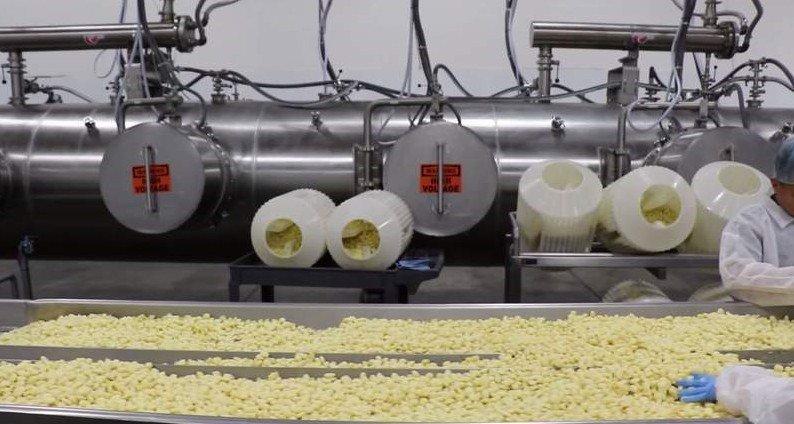 EnWave’s Radiant Energy Vacuum (“REV™”) technology continues to capture and increase market share in the food, cannabis and pharmaceutical drying industries. The superior product quality and economic advantages of using REV™ technology as an alternative to conventional options is being proven in several market verticals on a global basis. EnWave anticipates continued commercial success and growth in the worldwide deployment of REV™ technology.

• Building sales pipeline by way of increased S&M expense to $2.2 million compared to $0.8 million for 2016, an increase of $1.4 million. EnWave Canada increased S&M expenses $0.5 million as the Company invested into building its sales pipeline for prospective royalty partners.
• Containing G&A expense with G&A for Q4 2017 being lower than Q4 2016 by $0.2 million, and G&A expense for the year was fairly consistent year over year with a slight increase of 4%. G&A expense as a percentage of revenue for 2017 was 13%, which was the same for 2016.
• Building revenues with Q4 2017 revenue of $3.6 million compared to $2.5 million for Q4 of 2016, an increase of 44%. Annual revenue of $15.9 million for 2017 was higher than the previous year of $14.9 million, an increase of 7% or $1.0 million. Continuing to be cash flow positive with cash flow from operations prior to changes in non-cash working capital(*) of $0.01 million for 2017 compared to $1.2 million for 2016, showing positive cash flows from operations before taking to account changes in working capital.
• Improved the operational structure of NutraDried by replacing its CEO, revamping finance and accounting functions, and replacing its prior marketing agent with Slant Design and Marketing, a boutique Vancouver-based marketing and branding agency.
• Reporting improved annual net income at NutraDried of $0.7 million for 2017 compared to $0.3 million in 2016, and continued to contribute to the growth of the Company. NutraDried’s success solidifies the business case for using REVTM for creating profitable consumer products and new brands for our royalty partners.
• Improving revenues and profit margins at NutraDried by tactically increasing S&M expenses by $0.9 million to allow NutraDried to sell Moon Cheese® direct to retailers and distributors through its network of brokers in the United States.
• Strengthening the balance sheet by completing a prospectus offering and concurrent private placement of 9,530,000 Units of the Company at $1.05 each for combined gross proceeds of $10 million on November 15, 2017. Each Unit consisted of one common share and one-half of one common share purchase warrant (each whole common share purchase warrant, a "Warrant"). The Warrants were accepted for listing by the TSX Venture Exchange and commenced trading under the symbol ENW.WT at the open of the market on November 22, 2017.

EnWave’s annual and interim consolidated financial statements and MD&As are available on SEDAR at www.sedar.com and on the Company’s website www.enwave.net/financials.

(*) Non-IFRS Financial Measures
Cash flow from operations prior to changes in non-cash working capital is not a measure of financial performance under IFRS. This measure is not necessarily comparable to similarly titled measures used by other companies and should not be construed as an alternative to net income or cash flow from operating activities as determined in accordance with IFRS. Please refer to the discussion included in the Company’s annual MD&A for the year ended September 30, 2017.

About EnWave
EnWave Corporation, a Vancouver-based advanced technology company, has developed Radiant Energy Vacuum (“REV™”) – an innovative, proprietary method for the precise dehydration of organic materials. REV™ technology’s commercial viability has been demonstrated and is growing rapidly across several market verticals in the food and pharmaceutical sectors. EnWave’s strategy is to sign royalty-bearing commercial licenses with industry leaders in multiple verticals for the use of REV™ technology. The company has signed twenty-three royalty-bearing licenses to date, opening up eight distinct market sectors for commercialization of new and innovative products. In addition to these licenses, EnWave has formed a Limited Liability Partnership, NutraDried LLP, to develop, manufacture, market and sell all-natural cheese snack products in the United States under the Moon Cheese® brand.

EnWave has introduced REV™ as the new dehydration standard in the food and biological material sectors: faster and cheaper than freeze drying, with better end product quality than air drying or spray drying. EnWave currently has three commercial REV™ platforms:

1. nutraREV® which is used in the food industry to dry food products quickly and at low-cost, while maintaining high levels of nutrition, taste, texture and colour;

2. powderREV® which is used for the bulk dehydration of food cultures, probiotics and fine biochemicals such as enzymes below the freezing point, and

3. quantaREV® which is used for continuous, high-volume low-temperature drying.

An additional platform, freezeREV®, is being developed as a new method to stabilize and dehydrate biopharmaceuticals such as vaccines and antibodies. More information about EnWave is available at www.enwave.net.

Safe Harbour for Forward-Looking Information Statements: This press release may contain forward-looking information based on management’s expectations, estimates and projections. All statements that address expectations or projections about the future, including statements about the Company’s strategy for growth, product development, market position, expected expenditures, and the expected synergies following the closing are forward-looking statements. All third party claims referred to in this release are not guaranteed to be accurate. All third party references to market information in this release are not guaranteed to be accurate as the Company did not conduct the original primary research. These statements are not a guarantee of future performance and involve a number of risks, uncertainties and assumptions. Although the Company has attempted to identify important factors that could cause actual results to differ materially, there may be other factors that cause results not to be as anticipated, estimated or intended. There can be no assurance that such statements will prove to be accurate, as actual results and future events could differ materially from those anticipated in such statements. Accordingly, readers should not place undue reliance on forward-looking statements.

NEW WAYS OF COMMUNICATION AND FINANCING FOR RESOURCE COMPANIES IS OUR MISSION! TRANSPARENCY, QUALITY AND EDUCATION OUR BOOSTER!

The world finance system is facing massive uncertainty and risk making it imperative that one has wide-ranging knowledge about alternative investment opportunities. Ensure your financial future by taking control. Diversification is the means to survive the current and future market difficulties with a specific focus on value investing such as quality stocks, precious metals and resources in general.

Swiss Resource Capital AG is your partner entering the mining industry. We also work very closely with successful investment funds and asset managers. SRC has a worldwide professional network of experts and unique access to financings, allowing investors to be part of a company at early stages. Ongoing analysis, monitoring and contact with the management and site visits of selected projects keeps us abreast of promising investment opportunities in the resource sector. Our news distribution system keeps you all the time informed and up to date about the latest developments.

We assist you and deliver clear and concise information pertaining to the precious metals and the resource sector as well as selected mining companies. Through our new developed multimedia channels like the exclusive Resource-TV you have access anytime and anywhere in the world to comprehensive data and information as well as access via our log in function to the free research area of our website.

Via exclusive events and one-on-one meetings we offer interested investors in many countries the opportunity to get direct information from and personal access to the management of various mining companies. We make sure that you know what we know!