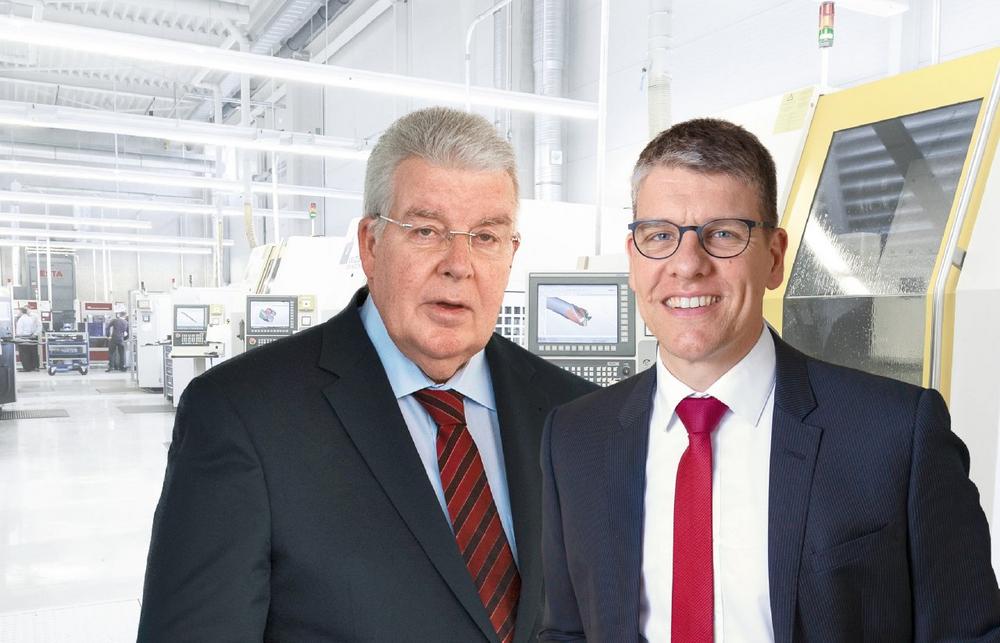 23. Januar 201816. August 2019 Firma MAPAL Dr. KressMaschinenbauaalen, any, board, business, change, company, familiy-owned, generation, head, kress, leipzig, machine, management, mapal, mba, new, pegasus, president, responsibility, retirement, son, success, successor, university, vdma
Dr Dieter Kress has already announced during his 75th birthday celebrations that he planned to gradually step down from the day-to-day business. After 49 years as head of MAPAL, Dr Dieter Kress withdrew from the executive board of the company with effect from 1 January 2018. “Of course, I am and will remain closely attached to MAPAL to provide any advice to my son that he may need,” emphasises Dr Dieter Kress.

The retirement of Dr Dieter Kress from the MAPAL executive board marks the end of an era, because Dr Dieter Kress has shaped MAPAL and paved the way for the company’s success. The question of his successor was resolved a long time ago. His son, Dr Jochen Kress, has been President of the MAPAL Group since 1 January 2018. The company will therefore remain what it always was and for what it stands – a family-owned company. Dr-Ing Jochen Kress, born in 1975, studied machine engineering at the TU Dresden. Subsequent studies as MBA (Master of Business Administration International Management) at the Leipzig Commercial College were followed by his doctorate in 2007. Dr Jochen Kress has extensive international experience, particularly in the USA and Asia. He has been a member of the MAPAL executive board since 2008. In addition to his work activities, Dr Jochen Kress is also strongly involved in teaching, research and business groups.

“It was naturally not easy for me to completely give up the responsibility for MAPAL that I have borne for so long,” admits Dr Dieter Kress. But: “I know that the company is in good hands with my son. He has taken over more and more responsibilities in the last few years and has proved to be very capable as my successor.” He is very happy, for example, that his son is intensively addressing topics such as digitalisation.

“With MAPAL, my father is handing over to me his life’s work that he has turned into what it is today over the last almost fifty years,” says Dr Jochen Kress. And “I am very grateful for the faith he is placing in me. I am taking on my new duties with the greatest possible commitment and will continue to manage the company in my father’s spirit.”

Just how highly esteemed Dr Dieter Kress is by the employees was also highlighted during the works meeting in September last year when he announced his retirement. The reaction of the staff to this announcement can best be described as “emotional”. After all, Dr Dieter Kress has guided them all through the developments of the company for almost five decades – and with a great deal of commitment and passion for the employees, such as during the crisis years 2008 and 2009. And just how highly he appreciates the staff was reflected once more on the occasion of his 75th birthday. He invited all the Aalen employees and their families to a large family party on the MAPAL works premises in Aalen to celebrate with them.

Dr Dieter Kress’ life’s work can also be expressed in figures: During his years of management, the company grew from a small regional producer of tap drills with 100 employees into an international group. Today MAPAL has more than 5,000 employees worldwide, around 1,800 of whom in Aalen. Last year the limited partnership (KG) generated consolidated sales of more than 600 million euros. Dr Dieter Kress receives great recognition for this not only from his employees. For example, he was awarded the Federal Cross of Merit on Ribbon of the Order of Merit of the Federal Republic of Germany for his outstanding contributions and personal commitment.

During his many years as President, Dr Dieter Kress was not only active in various committees, initiatives and associations, including being Chairman of the Precision Tools Industrial Association in the VDMA, but also made intensive contributions to the region. For example, he was a member of the university council at the University of Aalen and a founder member of the P.E.G.A.S.U.S. association that supports start-up companies.

MAPAL Präzisionswerkzeuge Dr. Kress KG is one of the leading international suppliers of precision tools for the machining of practically all materials. The company founded in 1950 supplies leading customers from the automotive and aerospace industries and from machine and plant engineering. With its innovations the family-owned company sets trends and standards in production and machining technology. MAPAL sees itself as a technology partner, supporting its customers with the development of efficient and resource-conserving machining processes using individual tool concepts. The company is represented with production facilities, sales subsidiaries and representatives in 44 countries worldwide. In 2016 the MAPAL Group had 5,000 employees, generating sales of EUR 575 million.