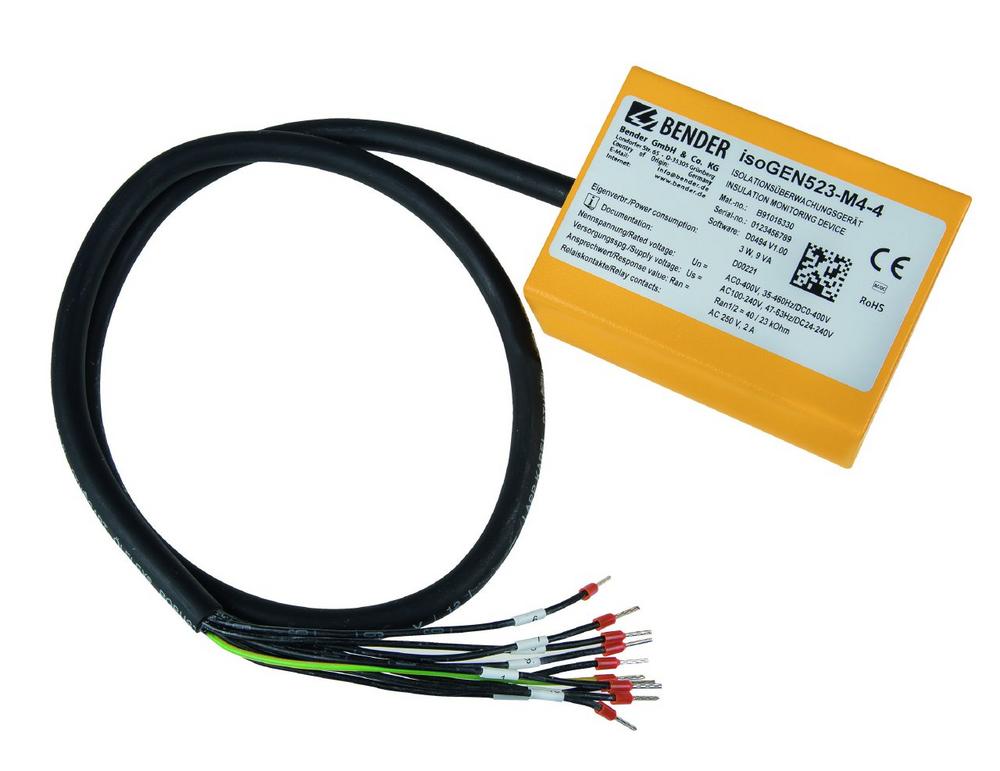 24. Januar 201818. Mai 2020 Firma BenderElektrotechnikInsulation monitoring devices, Insulation test device, isoGEN523, Mobile power generator
Bender has been a supplier of insulation monitoring devices that are specified for use in mobile power generators for many years. This ISOMETER® product family is generally used for independent low-voltage power generation facilities that are not connected to the electricity distribution grid. This application is more precisely described in the new version of DIN VDE 0100-551 (VDE 0100-551):2017-02. The protective separation with one or more loads is described in DIN VDE 0100-410 (VDE 0100-410):2007-06.

With a single load connected to the generator, no further protective measures are required. However, if more than one operating resource is connected to the generator, the requirements of the new section ZC.3.2.2 of DIN VDE 0100-551, issued in February 2017, apply. The protective measure is then to be executed so that an insulation monitoring device (IMD) complying with DIN EN 61557-8:2016-01 is installed between the active conductors and the equipotential bonding. This must continuously monitor the insulation resistance. If the insulation resistance falls below the value of 100 Ω/V (230 V – 23 kΩ), the insulation monitoring device switches the output circuit of the generator or the electrical load off within one second.

When selecting the IMD, it is to be ensured that the measuring technology is suitable for this application. The simplest devices with superimposed DC measuring voltage are usually not able to detect insulation faults with DC components or higher system leakage capacitances. The current IMDs, such as the ISOMETER® of type IR423 and IR123 from Bender, meet these requirements and are suitable for mounting on DIN rails or in the control cabinet of a generator.

The ISOMETER® isoGEN523 was developed in order to offer an IMD that complies with the current normative requirements, which is also suitable for extreme environmental conditions. In principle, this is a further development of IR423.

Unlike its predecessor, the unit is housed in a sealed case and can be connected via a cable in the generator. A port monitor, which is activated when the device is turned on and then hourly by an automatic self-test, detects whether the necessary ports to the generator and the equipotential bonding are still open. This feature is especially important as the device can also be used for high shock and vibration requirements, as well as in a higher temperature range. Even heavy pollution or high humidity are not a problem for the isoGEN523.

The isoGEN523 offers the possibility of system isolation as an additional feature. This means that the IMD automatically disconnects from the monitored power supply in a voltage-free state via integrated switch contacts.

Previous devices of this type such as the ISOMETER® types IRG100RS, IRG700RS/AS or IR140RS can also be replaced with this device version.