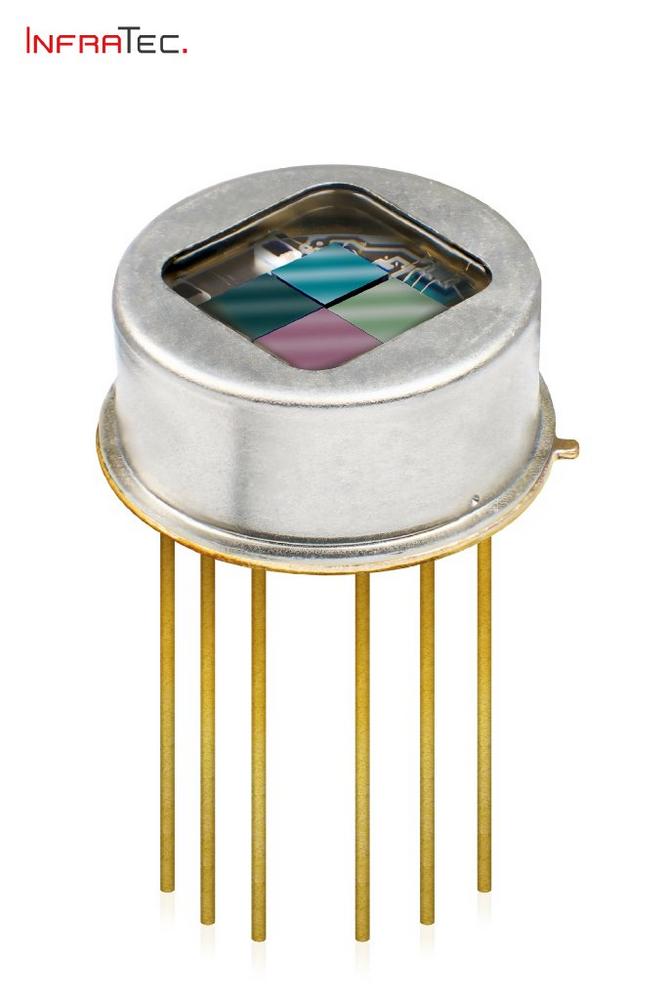 30. Januar 201813. Mai 2020 Firma InfraTec GmbH Infrarotsensorik und MesstechnikOptische Technologienaperture, can, compared, fire, has, infrared, infratec, its, looking, lrm, production, SAPPHIRE™, sealing, series, stack
The technical development in the field of industrial fire protection and early fire detection has made tremendous progress during recent years. One reason for this are the latest infrared detectors, which ensure for example the production of increasingly smaller and yet more complex systems for fire-fighting as central components. InfraTec now presents a new pyroelectric detector that can give more impetus to this development.

Huge angle, huge effect
The LRM 244 belongs to the series of PYROMID® detectors and combines four channels in one TO8 housing (Ø 15.2 millimetres). An aperture window of about 8.5 × 8.5 mm2 is integrated in the cap of the housing. The channel filters, each with an area of 2.8 × 2.8 mm2, are protected inside the detector. An enormous field of view (FOV) distinguishes the LRM 244 from other detectors of the LRM series. The extremely large, symmetrical field of view of the detector of more than 90 degrees enables flames to be detected within the greatest possible angular range. In addition to this, pyroelements, each with a particularly large sensitive surface of 2 × 2 mm2, ensure an ideal signal-to-noise ratio.

Numerous benefits for users
The combination of a large FOV and large-scale pyroelectric elements makes the latest development from InfraTec one of the most powerful detectors in the field of flame sensor technology. A significant part of this is the miniaturised stack design of the LRM detectors. In this case, the merging of the visual elements proves to be particularly beneficial. Thanks to this configuration, the FOV is not only symmetrical but larger than with any other four channel detector. The compact design also opens up the opportunity for users to integrate high-cost components, such as additional sapphire discs, directly into the detector cap. Compared to an external solution, this method saves costs since the integrated sapphire discs require much less space.

First and foremost, the LRM-244 impresses thanks to its features. It opens up new possibilities for all those who are already using a four channel detector in flame sensor technology and are looking for a more efficient solution. At the same time, users who currently rely on single channel detectors but want to change to a four channel detector, are becoming more flexible. The thermal compensation and optional hermetic sealing additionally facilitate the integration into existing systems.

The InfraTec infrared sensor and measuring technology company was founded in 1991 and has its headquarters in Dresden, Germany. The privately held company employs more than 200 employees and has its own design, manufacturing and distribution capabilities.

Infrared sensors, with electrically tunable filters based on MOEMS, count among the products of the infrared sensor division, next to spectrally mono and multi channel infrared detectors. These detectors can be used in gas analysis, fire and flame sensor technology and spectroscopy.

With its Infrared Measurement business unit, InfraTec is one of the leading suppliers of commercial thermal imaging technology. In addition to the high-end camera series ImageIR® and the VarioCAM® High Definition series, InfraTec offers turnkey thermographic automation solutions.