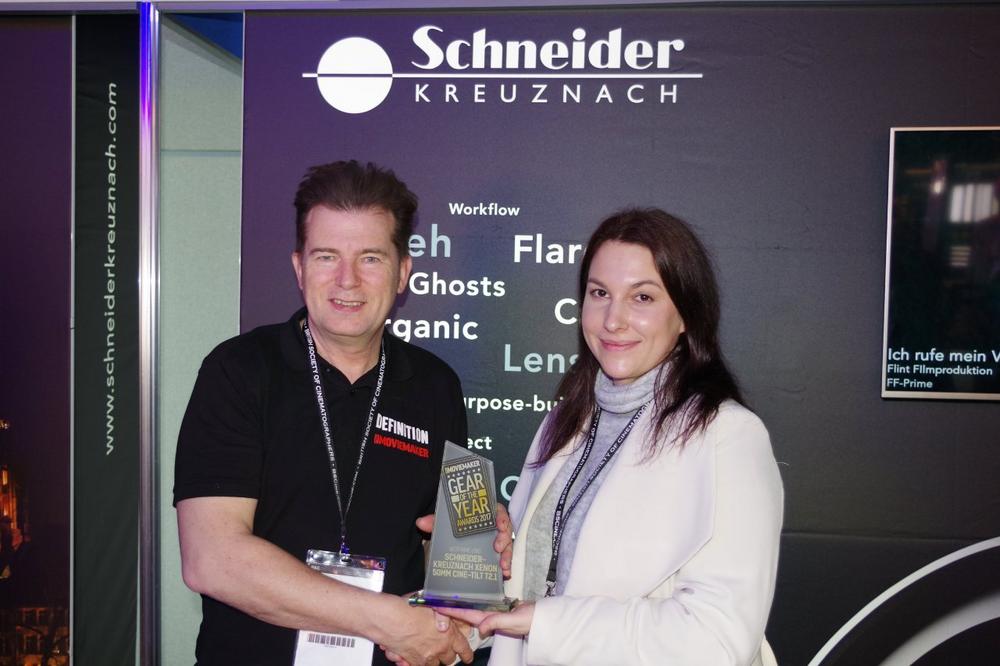 21. Februar 201811. September 2019 Firma Jos. Schneider Optische WerkeOptische Technologienaperture, award, cine, design, gear, kreuznach, lens, lenses, moviemaker, new, sensor, t21, trade, users, with
Schneider-Kreuznach has been awarded Gear of the Year 2017 by trade journal Pro Moviemaker in the category “best prime lens” for its Xenon 50mm Cine-Tilt T2.1. The winners were determined by readers based on three criteria: innovation, quality and handling of the products. Readers were given a choice of film lenses by five different manufacturers. “We are delighted to have won this award, and particularly proud that we were chosen by users,” says Piet Thiele, Product Manager Cine at Schneider-Kreuznach.

The innovative Cine-Tilt lenses by Schneider-Kreuznach combine the features of full-frame primes with an added tilt function up to ±4°. By sustaining the field of view during focus and tilt actions, the new cine-tilt design means that previously unimaginable images can be taken by moving and tilting the focus plane. The lenses extend the possibilities of the out-of-focus range, especially when using tilt with a large aperture. A 4° tilt angle on the sensor plane corresponds to an 80° or more tilt of the focal plane, depending on the focal length and distance setting.

The Schneider Group specializes in developing and producing high-performance photographic lenses, cinema projection lenses, as well as industrial optics and precision mechanics. The group comprises Jos. Schneider Optische Werke, founded in Bad Kreuznach in 1913, and its subsidiaries Pentacon (Dresden), Schneider Kreuznach Isco Division (Göttingen), Schneider-Optics (New York, Los Angeles), Schneider Bando (Seoul), Schneider Asia Pacific (Hong Kong) and Schneider Optical Technologies (Shenzhen). The company’s main brand is "Schneider-Kreuznach". It has around 640 employees worldwide, with 370 based in its German headquarters. For years now the group has been a world market leader in the area of high-performance lenses.