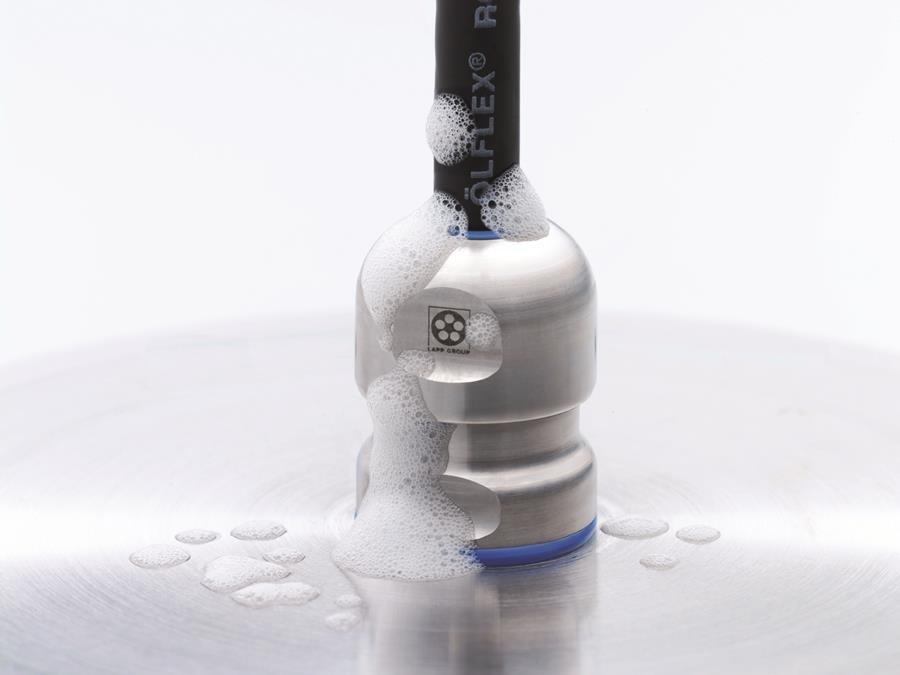 20. März 2018 Firma U.I. LappFirmeninternbio, cleaning, dairy, epic, etherline, hose, lapp, lflex, market, micro, power, skintop?, steel, water, with
Once again, the Stuttgart-based Lapp Group will be exhibiting at Anuga FoodTec (Hall 10.1, Stand C81). The key features of Lapp’s connection solutions for the food and beverage industry include resistance to standard cleaning agents and easy washability, as well as safety, reliability and longevity. They comply with national and international standards and hygiene requirements. “We pay special attention to offering our customers tailored solutions. No customer should pay for something they don’t need”, says Radek Kasparik, Market Manager Food & Beverage at Lapp.

For example, this year the Lapp Group developed an EPIC® connector made of a special copper alloy with a smooth surface, fewer edges and a patented connector geometry for one of the world’s biggest manufacturers of pasta drying systems. This solution is as good as a stainless steel connector when it comes to withstanding the high humidity, acidic atmosphere and flour dust that occur when drying pasta in the system, but at a fraction of the cost. At the same time, it meets all the requirements for hygienic design.

One solution that meets the highest demands and, of course, will also be on display at Anuga is the EHEDG-certified SKINTOP® HYGIENIC stainless steel cable gland, which has a shape and material (class V4A stainless steel) meets the very highest hygiene standards. Like the EPIC® connector, it has no corners or edges, which means that there is nowhere for liquids to collect or for micro-organisms to form. The seals are made of a material approved for use with foodstuffs (FKM elastomer).

The suffix ROBUST is given to Lapp’s exceptionally weather proof, ozone and UV resistant cables, which have special TPE sheaths and can be used in a broad temperature range both indoors and outdoors. For example, they are insensitive to contact with bio-oils and their emulsions, numerous vegetable, animal and synthetic fats and waxes, and resistant to ammonium compounds and biogases. This makes them suitable for use in the food and beverage industry. They include the ÖLFLEX® ROBUST power and control cables, the UNITRONIC® ROBUST data cables and the ETHERLINE® ROBUST Industrial Ethernet Cat5 and Cat6 cables. All ROBUST cables are particularly widely used in processing of dairy and meat products.

A wide range of circular and rectangular connectors, such as the corrosion and salt water resistant EPIC® ULTRA or the SILVYN® FG NM protective hose with FDA-tested outer sheath and ECOLAB certification, round off the key exhibits at Anuga FoodTec.

To consistently remain at the cutting edge in the food and beverage industry, Lapp words in conjunction with a number of partners in the different sectors of the industry. Lapp supports its customers in achieving their objectives through product approval and testing in line with EHEDG, ECOLAB® and IPA clean room suitability as well as the company’s internal laboratory and testing facilities for individual product testing.