Now cooling on clothes is only activated when needed 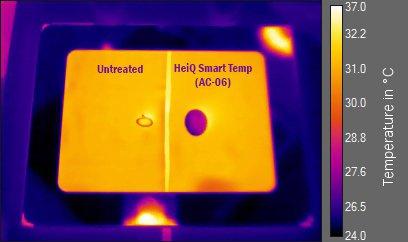 From its launch back in 2011 until today, the intelligent thermoregulation technology HeiQ Smart Temp has grown to one of the market leading dynamic cooling technologies. More than 50 major brands globally on more than 500 million garments use HeiQ’s most popular technology in their products spanning the application scope from basic apparel and sportswear to home textiles. HeiQ Smart Temp is used as the differentiating technology in Hanes’ X-Temp program, Dick’s Sporting Goods’ Second Skin range, Stance’s Feel 360 socks collection, Dickies’ Temp-iQ range and BekaertDeslee’s mattress ticking goods – just to name a few. This outstanding achievement spurred HeiQ’s research and development team on even more to move the previous product version to the next level.

Now, the Swiss textile innovator releases the new addition to the HeiQ Smart Temp family: HeiQ Adaptive AC-06. This patent pending technology version equips the sports enthusiast with activated cooling and enhanced performance and thermal comfort. Upgraded HeiQ Smart Temp interacts with the wearer, helping to lower the skin’s temperature when it needs it most. The innovation is based on an instant cooling hydro functional polymer that is activated when the skin temperature exceeds a range between 28°C and 32°C (82.4°F and 89.6°F) and deactivated once cooling is complete. Two actions are used to keep the body at the optimum performance temperature: Even before the first sign of sweat on fabric, a melting action is activated, sending instant-cooling impulse directly to the skin. And when the heat is really turned up, a vaporizing action transports sweat away from the body, reducing the skin’s temperature by 1.5°C to 2.5°C (2.7°F to 4.5°F) compared to an untreated fabric sample. Overall, the wearer feels cool, comfortable and focused to perform better – even in the most uncomfortable of conditions.

Inhouse thermoregulation performance testing has revealed high reduction rates of the skin temperature measured over a certain time by utilizing a thermal imaging infrared (FLIR) camera. The FLIR camera set-up imitated the human skin while sweating at different levels of activity. “In contrast to the Dynamic Evaporation testing, the FLIR camera measurement allows us to quickly though accurately visualize the temperature change of a fabric treated with HeiQ Smart Temp, for example compared to an untreated fabric sample,” says HeiQ’s Chief Technology Officer Walter Nassl.

During Performance Days in Munich the upgraded technology will be presented on high-tech sports fabrics by HeiQ’s Italian partner mills Pontetorto and Tessitura Taiana Virgilio. Both fabrics with upgraded HeiQ Smart Temp have been picked for the PD Forum in the “Cooling Technologies focus topic”. Further, these two fabrics are also going to be available soon in HeiQ’s fabric library for ordering and configurating online through the fast fabric sampling tool “heiq it!”. HeiQ welcomes all visitors to learn more about the upgraded HeiQ Smart Temp technology at their booth (Lounge 5/Hall 5) or during their workshops (Room 13/2nd Floor) at Performance Days Munich from 18-19 April 2018.

Founded in 2005 as a spin-off from the Swiss Federal Institute of Technology Zurich (ETH), HeiQ is a leader in textile innovation creating some of the most effective, durable and high-performance textile effects on the market today. HeiQ leverages its boundless academic research network and internal development specialists to invent disruptive new technologies that meet consumer needs and outperform the market. Engaging along the entire value chain, HeiQ is the ideal partner to help brands innovate, differentiate their products and capture added value at the point of sale.
www.heiq.com