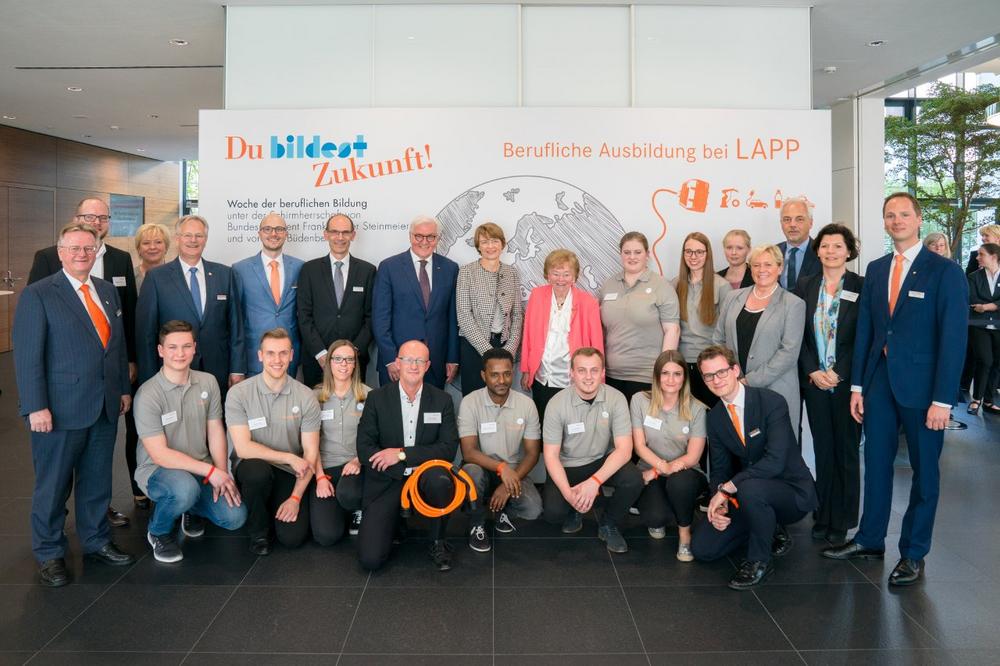 20. April 201820. April 2018 Firma U.I. LappAusbildung / Jobscommerce, kmk, lapp, learning, logistics, machine, market, mint, new, project, refugees, social, spending, students, with
VIP visitors at Lapp: Yesterday afternoon, German President Frank-Walter Steinmeier and his wife Elke Büdenbender visited the Stuttgart-based family company to find out about the practicalities and challenges of professional apprenticeships. This was part of the week-long focus on professional education, which runs from 16 to 20 April, and has the couple as its patrons. During the week, they are visiting numerous locations throughout Germany to gain an insight into the quality and prospects for professional education. The delegation also included the State Minister for Culture, Youth and Sport, Susanne Eisenmann, and the Chief Executive of the Baden-Württemberg Employers’ Association, Peer-Michael Dick.

“We see this visit as recognition for the huge commitment we show to offering apprenticeships. We are delighted that the President and his wife chose Lapp as the only company being visited today”, said Andreas Lapp, Chairman of the Board of Lapp Holding AG.

“As a family business, we take our social responsibility very seriously. We want to give young people good opportunities for the future. Qualified apprenticeships are the foundation of this. We mainly train people for our own needs, as well-trained and qualified employees help ensure excellence and the success of our company in the long term”, explained Matthias Lapp, CEO for the region Europe, Africa, Middle East and South America. Hilmar Döring, Head of Human Resources and Organisation Development emphasised: “A good apprenticeship is just the first step. We want to make young people aware of their prospects. Our aim is to make our company a learning organisation, in which lifelong learning by employees and continuous systematic development of the organisation are inextricably linked.” Meanwhile, Minister of Education and Cultural Affairs Susanne Eisenmann said: “Professional education is crucial in ensuring we have a good supply of specialist employees in the state. Our SMEs play a central role here. They are simultaneously places of learning and a bridge to the world of work. This close link between the education system and the labour market makes an important contribution to our state’s economic strength.” The importance of good training was also stressed by Peer-Michael Dick, Chief Executive of the Baden-Württemberg Employers’ Association: “The quality and quantity of young professionals coming through will play a big role in determining the future prosperity and competitiveness of our social system. The employers’ associations and their member companies are making an important contribution with their commitment and their educational initiatives.”

At present, 65 young men and women are apprentices at Lapp’s Stuttgart site. One of those who spoke to the President was Tedros Gebru, who completed his apprenticeship as a machine and system operator in 2017, having arrived in Germany from Eritrea in 2011. “I thought it was great to see such a high-ranking politician taking an interest in young people. Good training improves our future prospects. And I’m delighted that I have so many opportunities at Lapp.” In recent years, over 90 percent of apprentices have been taken on full-time.

Lapp currently offers eleven different apprenticeship programmes. These range from apprenticeships in commercial careers such as industrial administration or warehouse logistics, to those for technical roles such as machinery and systems operators or mechatronics technicians. Cooperative study programmes are another option, such as business services and logistics management or electrical engineering. This year, the apprentices include six refugees from Afghanistan, Eritrea, Kosovo and Somalia. After completing their 12-month entry qualification, they are now starting their apprenticeships as machine and system operators and business IT specialists. This is part of Lapp’s participation in the German government’s project to help sustainably integrate refugees in the country. In 2018, another six refugees will be given the chance of an apprenticeship at Lapp.

An apprenticeship at Lapp begins with an introductory training week, in which the new apprentices get their first insight into the company’s structures, processes and characteristics. Following this, a joint team building session with all apprentice year groups takes place at the State Academy for Youth Education in the nearby town of Weil der Stadt.

Lapp also organises regular training weeks and team trainings, as well as numerous events and projects that specifically involve the apprentices. These include organisation of the annual employees’ anniversary party, careers fairs for local school leavers, or science and technology events for inventive young children.  The apprentices are also an important part of the Lapp trade fair stand team at the Hannover Messe every year.

They are also trained in social responsibility. For two weeks, they work in a social institution of their choice as part of a project called “Open up! Für Azubis“. Apprentices were also involved in the “Multi-generational management at Lapp” workshop.

As a globally active company, Lapp also allows its apprentices and students to spend time working abroad. For four to twelve weeks, they have the choice of either working in different departments in one of Lapp’s international subsidiaries or taking part in the EU’s ERASMUS+ programme, spending time in a Lapp company in another country and taking a language course. This offer was taken up by 22 apprentices in 2017.

Lapp makes significant efforts to attract apprentices. The company appears at apprenticeship fairs and supports a range of careers events and campaigns, such as “Girls Day”, “MINT-Dialog Day!” or “Schüler im Chefsessel”. Internships for school students are also available. Lapp has signed education partnership agreements with several schools in the Stuttgart suburb of Vaihingen, where the company has its European headquarters. Education cooperation agreements are also in place with four other Stuttgart schools.

During an apprenticeship, intensive support is guaranteed. Lapp has 86 training managers and six specialist trainers in Stuttgart. They need to understand the different cultural backgrounds of their apprentices. Training coordinator Anne Voigt said: “Apart from German, our apprentices speak 21 different languages. This multilingualism definitely enriches Lapp.”