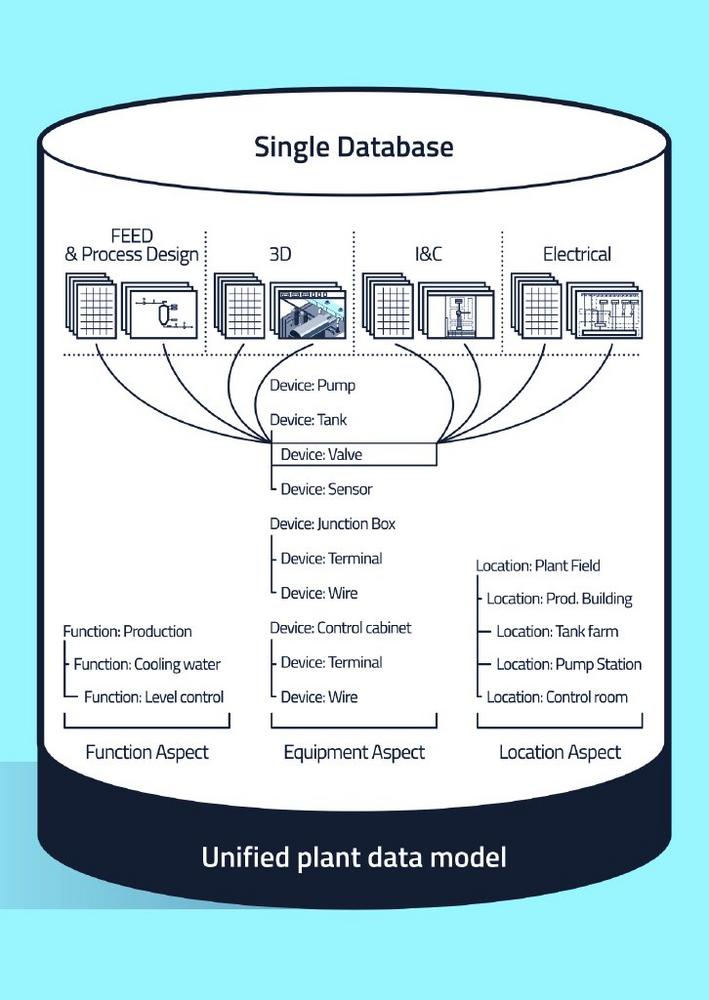 24. April 201817. März 2020 Firma AUCOTEC AG - ENSoftwareachema, aspen, aucotec, bigvand, cloud, connect, dcs, erp, market, platform, plm, press, project, Server, with
At ACHEMA 2018, Aucotec AG will be showing for the first time the comprehensive expansion of its collaborative platform for plant engineering. It is the only system that integrates all core disciplines in a versatile data model in a single database. Engineering Base (EB) thus redefines the term "consistency".

"There is great demand in the market to tear down the workflow obstacles created by toolchains," said Uwe Vogt, Executive Officer of Aucotec AG. "This is why we have now completed the range of the versatile model." According to him, this enables a unique parallelization of disciplines: from FEED via process and detail engineering to cause & effect, maintenance and consistent execution management for larger expansions. "Even the best interfaces and synchronization platforms do not shorten a toolchain. Engineering Base puts an end to the error-prone "forwarding" of data that makes parallelization impossible," explained Pouria G. Bigvand, Head of Product Management at Aucotec.

Plant engineering is characterized by major projects with a variety of the most demanding engineering and management tasks. Since the various disciplines involved are often developed globally, however, it is also necessary to connect the many experts, from different time zones, with their different skills, languages, technologies and engineering cultures. Often, even the engineering tools are different.

EB provides special conditions for this connection. The central data model at a separate application server level allows worldwide access to the entire plant documentation, also via the Cloud. "Thanks to the versatile model, EB is inherently collaborative, and the web connection also facilitates the necessary parallelization of engineering. This is the only way in which collaboration can be efficient," said Bigvand. All core disciplines work with the same database. If desired, changes are immediately visible in all representations of the changed object, but can also be controlled, for example, via proposal fields.

With its expansion, EB covers the entire engineering lifecycle in plant engineering and operation. The platform holds the versatile data model and organizes the workflows. Functions such as Aspen data import, TÜV-certified pipe classes, DCS configuration for different DCS systems in parallel, project status management or cause & effect tables at the press of a button show the degree of maturity of the solution. Networking with 3-D, ERP or PLM systems as well as a web connection are part of the standard offer.

"Our idea was to ‚motorize‘ plant engineering as such, rather than just speed up an old carriage with a bit more horsepower. We are convinced that we have achieved this with EB," said Executive Officer Uwe Vogt.

Aucotec AG has over 30 years of experience in developing engineering software for the entire lifecycle of machines, plants and mobile systems. The solutions range from flow diagrams via control and electrical engineering for large-scale plants to modular harness design in the automotive industry. Aucotec software is in use all over the world. In addition to its headquarters in Hanover, Aucotec operates six further sites in Germany as well as subsidiaries in China, South Korea, France, the United Kingdom, Italy, Austria, Poland, Sweden and the US. A global network of partners ensures local support throughout the world.