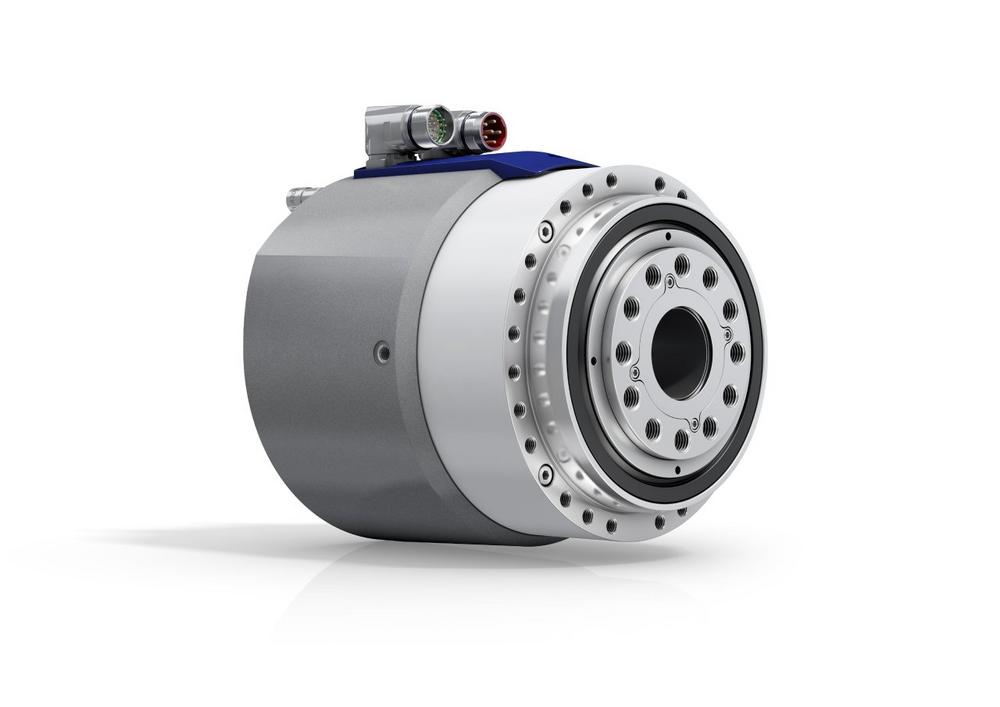 The Galaxie® Drive System’s successful market launch and continuous run-up to full-scale production has meanwhile lasted for three years. The last thirty-six months – as well as several hundred gearboxes and drive systems so far in operation – have confirmed that the performance data in the original specification is not only achieved but exceeded. The extended, modular system concept and new sizes represent the next, logical developmental advance.

The Galaxie® D Drive System is a compact mechatronic unit comprised of a Galaxie® G hollow-shaft gearbox and a special permanent magnet, high performance synchronous motor. Water cooling and an encoder system are standard; the holding brake is a useful additional feature. The same applies to the optional sensors, which allow operating data to be transmitted to an IoT cloud. This data can in future be accessed anywhere and on any device throughout the drive lifecycle, regardless of the control system.

The Galaxie® DF Drive System – the newest variant in the product family – will be premiered at the upcoming Hannover Messe 2018. It boasts an up to 30 percent reduction in length compared to the Galaxie® D. This space saving is possible because the motor is positioned radially around the gearbox. The new Galaxie® generation provides performance features which are superior on principle – like high torque density and zero backlash kinematics – and this superiority is also maintained in both Galaxie® DF sizes.

The Galaxie® GH was launched in the market by WITTENSTEIN for installation wherever the space for the length of the driven axis is limited. The right-angle version offers the same performance as the Galaxie® G, so that the drive design is not compromised in any way.

At the heart of all Galaxie® versions is the Galaxie® G hollow-shaft gearbox, whose innovative kinematics follow a logarithmic spiral and give the new generation its name. Galaxie® G lets customers realize their own motor-gearbox units. The servo motors can be mounted to the Galaxie® G using the standard adapter plates in WITTENSTEIN alpha’s modular toolkit.

Yet another space saver: Galaxie D in size 085

The new Galaxie® D Drive System in size 085 is designed for use in axes with very high compactness and precision requirements. It also particularly targets applications where high torsional rigidity and freedom from backlash are called for rather than torque. Even in this compact version, the Galaxie® D is still superior on principle: compared to a strain wave gearbox with approximately equivalent performance, it delivers three times better torsional rigidity – and one and a half times the maximum output speed.

WITTENSTEIN in all axes – a claim that the modular Galaxie® portfolio lives up to in every respect.

WITTENSTEIN SE – one with the future
With around 2600 employees worldwide and sales of approximately € 385* million (*provisional figure) in 2017/18, WITTENSTEIN SE enjoys an impeccable reputation for innovation, precision and excellence in the field of mechatronic drive technology – not just in Germany but internationally. The group comprises six pacesetting Business Units with separate subsidiaries for servo gearboxes, servo actuator systems, medical technology, miniature servo units, innovative gearing technology, rotary and linear actuator systems, nano technology and electronic and software components for drive technologies. Through its 60 or so subsidiaries and agents in approximately 40 countries, WITTENSTEIN SE (www.wittenstein.de) is additionally represented in all the world’s major technology and sales markets.