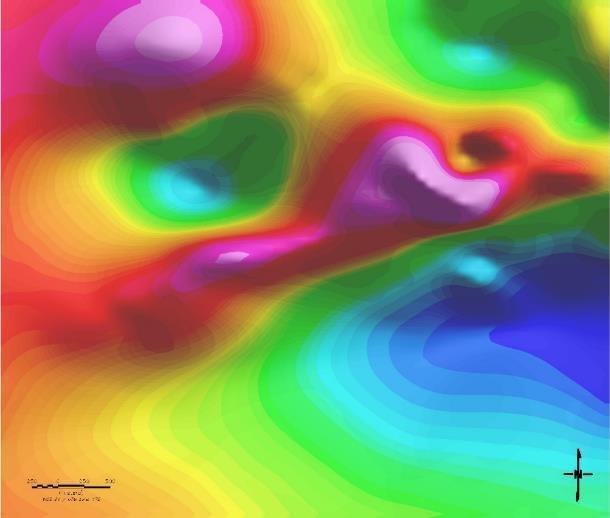 Aurania’s Chairman and CEO, Dr. Keith Barron commented, “We were convinced from the outset, that in addition to gold deposits associated with the two “lost cities”, the Cutucu mountain range would reveal multiple additional gold and copper targets.  Our exploration results are confirming this through the identification of a completely new area which is totally distinct from the cluster of five targets that comprise the Latorre area and is entirely separate from the Awacha porphyry copper target.  In addition, analytical results of soil samples taken from Crunchy Hill define a 400-metre-long target and our teams have recently found vuggy silica – a known indicator of epithermal gold-silver systems – throughout a one-kilometre-long extension of the Crunchy Hill system.”

Chalcedonic silica blocks, with textures typical of modern-day geyser platforms, and a feature of the upper parts of epithermal mineralized systems, have been found by the Company’s reconnaissance exploration teams in an entirely new part of the Project.  Data from the heliborne geophysical survey in that area define various strongly magnetic features that had been flagged as possible porphyry targets (Figure 1).  The silica blocks were found in streams peripheral to the strongly magnetic features, which is encouraging since epithermal deposits commonly lie above deep-seated porphyries, or lateral to them.  The Fruta del Norte (“FDN”) Deposit in Ecuador (being developed by Lundin Gold), for example, is located between two porphyries and a porphyry has been found beneath the giant Yanacocha gold deposit in northern Peru.  Stream sediment samples from this new target area have been sent for analysis.  Results will be reported as soon as they become available.

Results have recently been received from soil samples that were collected over a regular grid on the recently discovered Crunchy Hill target area, identified by vuggy silica in outcrop (see press release dated April 6, 2018).  The soil sample analytical results identify metal enrichment that effectively refines the size and shape of this target.  Based on this, we estimate that the target could cover an area of 400 metres by 100-200 metres.

Chemical analyses show a core area in which silver, volatile elements (naturally-occurring arsenic, antimony, selenium and mercury) and base metals (molybdenum and zinc), are concentrated (Figure 2).  The distribution of manganese, which occurs with the silver and volatile elements, provides an important clue as to the type of mineralization that can be expected at Crunchy Hill: only intermediate sulphidation epithermal systems, of which FDN, is a prime example, have manganese in their core.  The low gold values in the soil results are consistent with textures in the silica found at surface at Crunchy Hill that suggest that the very top of the epithermal system is exposed.  The upper part of these systems is often completely barren in gold:  for comparison, there was no gold at surface at FDN – where the gold-bearing zone was found at depth of 125 metres below surface.

Based on this success, the soil grid at Crunchy Hill has been extended to cover an area to the west in which vuggy silica, with cross-cutting veinlets of banded chalcedonic silica, have been discovered along a trend measuring approximately one kilometre in length.

Crunchy Hill is now one of the top targets for the initial scout-drilling program, planned for later this year.  A program likely consisting of five bore holes, each of about 300 metres, would be based in part on these soil geochemistry results.  However, intermediate sulphidation epithermal deposits are typically associated with abundant sulphides, which can be detected by induced polarization (“IP”) geophysical surveying.  As a result, the Company is considering focused IP surveying in order to further refine the three-dimensional shape of the Crunchy Hill target.   To optimize the selection of the initial drill hole locations, the team plans to integrate the results of the soil geochemistry, the distribution of specific features identified in silica, and IP results.

Soil sampling has proven highly successful at refining these epithermal targets and as a result, soil sampling over the other targets in the 100 square kilometre Latorre area will start as soon as the soil sampling of the western extension of the Crunchy Hill target has been completed.

The technical information contained in this press release has been verified and approved by Jean-Paul Pallier, MSc., a EurGeol designated by the European Federation of Geologists.  Mr. Pallier is a Qualified Person as defined by National Instrument 43-101, Standards of Disclosure for Mineral Projects of the Canadian Securities Administrators.

Aurania is a junior exploration mining company engaged in the identification, evaluation, acquisition and exploration of mineral property interests, with a focus on precious metals and copper.  Its flagship asset, The Lost Cities – Cutucu Project, is located in the Jurassic Metallogenic Belt in the eastern foothills of the Andes mountain range of southeastern Ecuador.

This news release contains forward-looking information that involves substantial known and unknown risks and uncertainties, most of which are beyond the control of Aurania. Forward-looking statements include estimates and statements that describe Aurania’s future plans, objectives or goals, including words to the effect that Aurania or its management expects a stated condition or result to occur. Forward-looking statements may be identified by such terms as "believes", "anticipates", "expects", "estimates", "may", "could", "would", "will", or "plan". Since forward-looking statements are based on assumptions and address future events and conditions, by their very nature they involve inherent risks and uncertainties. Although these statements are based on information currently available to Aurania, Aurania provides no assurance that actual results will meet management’s expectations. Risks, uncertainties and other factors involved with forward-looking information could cause actual events, results, performance, prospects and opportunities to differ materially from those expressed or implied by such forward-looking information. Forward-looking information in this news release includes, but is not limited to, Aurania’s corporate objectives, goals or future plans, statements, exploration results, potential mineralization, the corporation’s portfolio, treasury, management team and enhanced capital markets profile, the estimation of mineral resources, exploration and mine development plans, timing of the commencement of operations and estimates of market conditions. Factors that could cause actual results to differ materially from such forward-looking information include, but are not limited to, failure to identify mineral resources, failure to convert estimated mineral resources to reserves, the inability to complete a feasibility study which recommends a production decision, the preliminary nature of metallurgical test results, delays in obtaining or failures to obtain required governmental, regulatory, environmental or other project approvals, political risks, inability to fulfill the duty to accommodate certain indigenous peoples, uncertainties relating to the availability and costs of financing needed in the future, changes in equity markets, inflation, changes in exchange rates, fluctuations in commodity prices, delays in the development of projects, capital and operating costs varying significantly from estimates and the other risks involved in the mineral exploration and development industry, and those risks set out in Aurania’s public documents filed on SEDAR. Although Aurania believes that the assumptions and factors used in preparing the forward-looking information in this news release are reasonable, undue reliance should not be placed on such information, which only applies as of the date of this news release, and no assurance can be given that such events will occur in the disclosed time frames or at all. Aurania disclaims any intention or obligation to update or revise any forward-looking information, whether as a result of new information, future events or otherwise, other than as required by law.