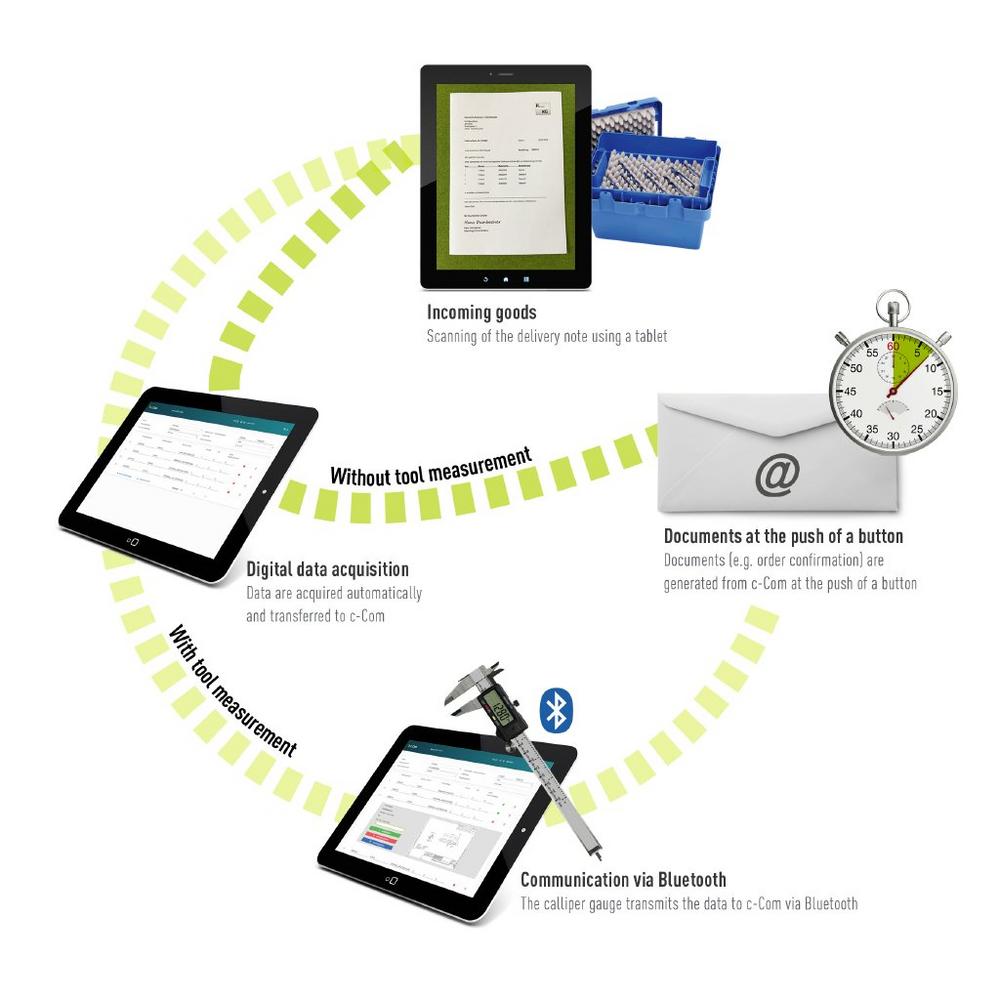 27. April 201816. August 2019 Firma MAPAL Dr. KressMaschinenbauc-com, company, crate, device, digital, documents, flow, invoice, measures, push, regrind, regrinding, report, software, tablet, tool
The regrinding of tools involves a considerable amount of administrative work, and this often bears no relationship to the results achieved. That is among other things due to the lack of a continuous flow of digital data between the customer and the company carrying out the regrinding or the tool manufacturer. The regrinding company receives a crate with tools for regrinding from the customer. The only information on the tools is to be found on the delivery note and has to be entered into the system manually. The regrinder inspects the tools for possible damage, possibly measures them and enters these results also into the system. Only now he can prepare the necessary documents, such as the order confirmation or service report, or later the invoice. In addition to the time this takes and the associated costs, this method is susceptible to mistakes that can occur during the manual input of data.

Digital regrinding handling
c-Com GmbH has developed a regrinding software that makes regrinding handling significantly easier and faster. It helps in total to save up to 75 percent of the time for the incoming goods. The delivery note is first scanned, for example using a tablet. The data are thereby recorded automatically and transferred to the regrinding software. All the relevant documents such as order confirmation, service report or invoice can then be created at the push of a button.

Fixed tools, such as tools with a defined minimum length, naturally still have to be inspected and measured. But the software makes even this step far simpler and faster. The length is measured using a measuring device networked with the c-Com software and compared with the values stored in the software. The operator is informed automatically if regrinding is possible or not. And if the tool has already been personalised with a QR/DMC code, the regrinding software also offers the possibility of digitally tracking the tool history. The number of previous regrindings of the tool and whether (further) regrinding is possible can be seen then immediately after scanning the code.

MAPAL Präzisionswerkzeuge Dr. Kress KG is one of the leading international suppliers of precision tools for the machining of practically all materials. The company founded in 1950 supplies leading customers from the automotive and aerospace industries and from machine and plant engineering. With its innovations the family-owned company sets trends and standards in production and machining technology. MAPAL sees itself as a technology partner, supporting its customers with the development of efficient and resource-conserving machining processes using individual tool concepts. The company is represented with production facilities, sales subsidiaries and representatives in 44 countries worldwide. In 2016 the MAPAL Group had 5,000 employees, generating sales of EUR 575 million.