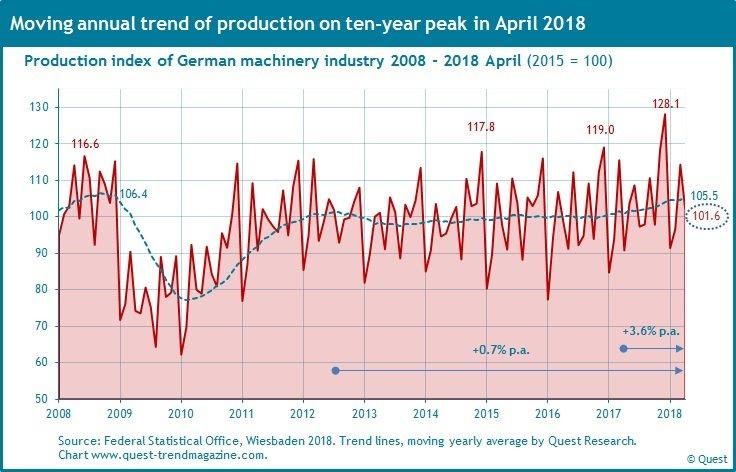 19. Juni 2018 Firma Quest Trend MagazineMaschinenbauautomation, industry, machine-builders, machines, production, quest, report, technology
Production in the German mechanical engineering industry has shown a slight growth trend of 3.6% per year since the beginning of 2017 up to April 2018. This growth trend replaced a five-year period of stagnation during which production only increased by 0.7% per year.

The slight growth trend of production marked with 105.5 index points in April 2018 its highest value since the outbreak of the global economic crisis ten years ago. The growth trend is recorded by the Quest Trend Magazine as moving annual average.

Sales in the German mechanical engineering industry have been growing at a rate of 3.2% per year since 2014. In April, the sales trend reached € 20.3 bn.

The Quest Trend Magazine analyses the economic development of the machinery industry according to three aspects: reliable trends derived from long-term developments; connection of these trends with the current situation; finally use of official statistics ensuring highest possible representation.

The Quest Trend Magazine analyzes the growth expectations of the machine-builders to 2020, the worldwide export markets of the German machinery industry, the majority of its automation-relevant sectors and many aspects of its automation technology at the machines.