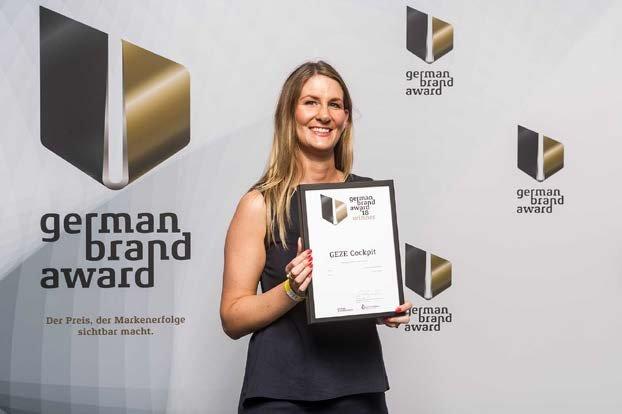 26. Juni 201817. Januar 2019 Firma GEZEProduktionstechnikaward, customers, door, geze, market, new, photo, print, project, smart, software, solutions, video, windows, with
Not only is GEZE heading in a new digital direction with its GEZE Cockpit building automation system, it is also turning to new market launch tools. GEZE was named the winner in the ‘Building & Elements’ category of the ‘Industry Excellence in Branding’ competition class for its outstanding launch campaign. The German Brand Award recognises exceptional branding in Germany and rewards unique brands and brand developers. The awards ceremony was part of the German Brand Award Convention held on 21 June 2018 at one of Berlin’s most glamorous locations, the Palazzo Italia – Römischer Hof.

"The award is a testament to how innovative our integrated market launch has been as a landmark ‘Digital First Campaign’. It recognises the bold step we have taken in successfully entering the building networking and smart building business together with our highly motivated teams and partners. This is also reflected in the GEZE Cockpit campaign. With GEZE Cockpit, we have successfully conveyed the new business model both in communication with our customers and new target audiences, and in how we shaped the market launch,” says Gabi Bauer, Head of International Marketing.

Digitalisation as an opportunity

In-depth knowledge of the market environment in the door and window sector has always been GEZE’s basis for continued development of its product range and its ability to innovate without distancing itself from its traditional product segments. That is why GEZE solutions for door, window and safety technology have a high degree of automation and technical intelligence. GEZE is taking the next step in digitalisation, following new paths from product development to market launch. One key challenge was to create the digital infrastructure to allow the development and operation of smart software products.

The GEZE Cockpit building automation system closes a gap in building automation. Integrating automated doors and windows into a building system creates completely new networking possibilities. Understanding the precise requirements of architects and planners, investors, building owners, building operators, installation engineers and system integrators was always a priority for the GEZE Cockpit market launch. As a result, pilot customers were involved in the project even before all the product features were completed. This agile and interactive development approach allowed mistakes to be avoided and significantly reduced the time from product development to the launch of GEZE Cockpit on the market.

The whole package: integrated communication with a new design

The aim was for the launch campaign to clearly demonstrate the step into a new business area and GEZE Cockpit’s high degree of innovation. To this end, a new design was created with a bold, lively key visual that runs throughout the entire campaign and stands out from the well-known GEZE design. Not only did the market launch involve new visual approaches, it is also the first GEZE campaign to follow the Digital First Strategy and use the full

range of digital communication options. The campaign design and implementation were entrusted to the expertise and competence of the Stuttgart agency Von Helden und Gestalten.

The campaign began with a teaser video. The central and most comprehensive campaign element is the GEZE Cockpit microsite, which was technically implemented by the Berlin agency interactive tools. Different customer groups, partners and influencers can find information there that is tailored to their needs in a clear, understandable and interesting way: it provides an illustration of the system, its benefits and added value, and all its capabilities. It also includes layout examples and reference projects. The service package that is always included demonstrates how comprehensively customers are supported in implementing GEZE Cockpit system solutions. GEZE has of course also included the tried-and-tested tactile feel of print brochures in its multi-channel communication approach.

The GEZE Cockpit microsite is full of inspirational ideas: http://www.cockpit.geze.com/

Employees from sales and services were also involved in the campaign. In addition to the web-based training courses, GEZE Cockpit Days ensured they were familiar with the functionality of GEZE Cockpit and its supporting communication tools.

About the German Brand Award 2018

The GEZE brand stands for innovation and premium quality products, processes and services. GEZE is one of the leaders on the market and is a reliable partner worldwide for door, window and safety technology products and systems. No matter what the requirements of the building are – GEZE realises optimum solutions and combines functionality and security with comfort and design. GEZE door closers open up numerous technical and visual options. Every day millions of people go through doors equipped with the overhead door closers from the TS 5000 series and enjoy the barrier-free convenience of automatic door systems, e.g. the Slimdrive and Powerturn lines. The integrated all-glass design systems are pure aesthetics. GEZE also has a wide product range for window and ventilation technology. Complete "intelligent" smoke and heat exhaust solutions (RWA) and a comprehensive selection of door systems for RWA air supply solutions are also available for preventative fire protection. GEZE’s safety technology includes escape and rescue route solutions, lock technology and access control systems. With system expertise, GEZE creates coordinated system solutions that combine individual functions and security requirements in one intelligent system. The latest innovations are the new building automation system GEZE Cockpit and interface modules for integrating GEZE products into networking solutions which turn buildings into Smart Buildings. GEZE product solutions have received numerous awards and can be found in renowned structures all over the world. The company is represented by 31 subsidiaries, 27 of which are abroad, a flexible and highly efficient distribution and service network and more than 3,000 employees worldwide and generated revenues of over 406 million Euros in the 2016/2017 business year. www.geze.com