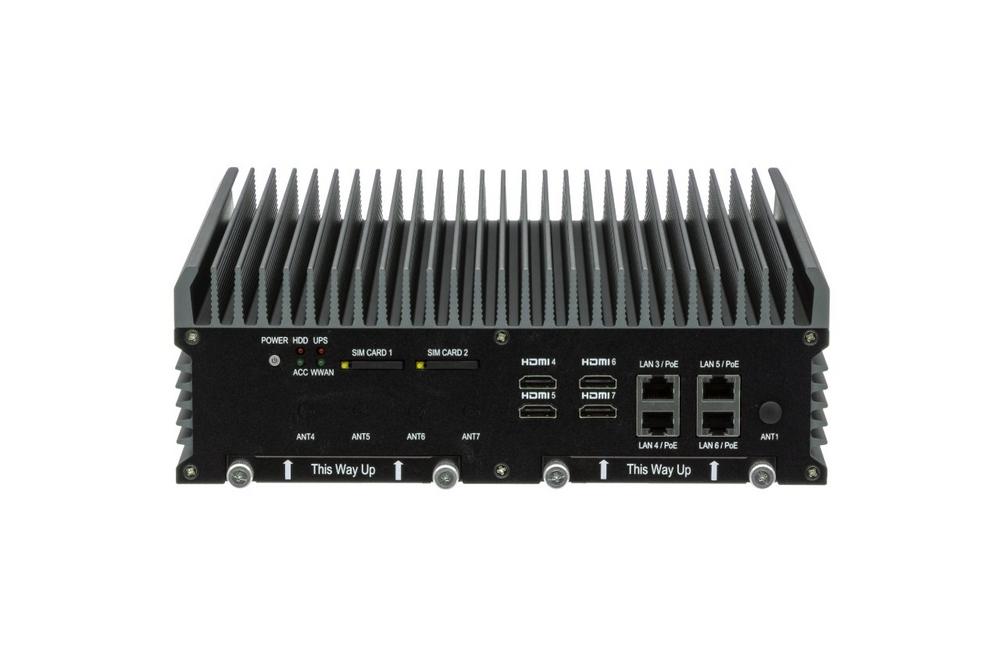 27. Juni 2018 Firma spo-commHardwareDigital Signage, embedded pc, GTX1050, industrial pc, intel?, mini-PC, nvidia, spo-book, spo-comm
Just a few weeks ago spo-comm welcomed a new classy Outdoor- and Vehicle-PC in its range, the spo-book RUGGED Q170. With the spo-book RUGGED GTX 1050 Ti, spo-comm is still on the go, making the hearts of all those who count digital signage their daily bread beat faster. Like its little brother, the RUGGED GTX 1050 Ti is equipped with a powerful Intel® Core i5 of the sixth generation with a power of 4 x 2.3 GHz and up to 3.3 GHz. The icing of the cake is the graphics card: an NVIDIA GTX 1050 Ti with 4GB memory.

The RUGGED GTX 1050 Ti is an absolute pioneer in the Mini-PC range of spo-comm. This is because our high-res industrial PC is the first system to be equipped with a dedicated graphics card in combination with a passive cooling system. The fanless cooling system ensured a quiet working environment as well as a longevity of the system.

The RUGGED GTX 1050 Ti has a total of 7 HDMI ports. Four of them adorn the front of the RUGGED and the three remaining can be found on the back site. All outputs offer the possibility of 4K playback. If 4K is not enough, the four ports on the front of the RUGGED give you the option of controlling an 8K video wall. The high performing NVIDIA GTX 1050 Ti with its 4 GB memory ensures smoother playback of the content. Since the system is also categorized as an Outdoor-PC, the spo-book RUGGED GTX 1050 Ti offers a special appeal for outdoor Digital Signage applications. But of course, the Mini-PC is also suitable for all other conceivable applications, such as for control stations, process visualization or exhibition installations.

Like all systems of the RUGGED series, the RUGGED GTX 1050 Ti can easily cope with outside temperatures that are in the so-called extended temperature range. This covers a span of -40° Celsius to 70° Celsius. As already mentioned in detail, both the passive cooling system and the solid and robust metal housing of the Industrial-PC ensure that the inside remains unaffected by air humidity and dust particles.

The spo-book RUGGED GTX 1050 Ti is able, like our RUGGED Q170, to absorb so-called voltage spikes, which occur, for instance, when starting the motor of a vehicle. In addition, unlike its predecessors, the RUGGED GTX 1050 Ti is capable of taming not just the usual 9-36 Volts. The wide range input of the talented Mini-PC can even intercept up to 48 volts. As usual, our new Vehicle-PC is like all our other systems tested for vibration and shocks according to the American military standards. Installations in vehicles are therefore ready to go!

Those who don’t want to rely on one single network provider can easily implement a Multi-SIM card in the spo-book RUGGED GTX 1050 Ti. Due to the broad network spectrum that you get through this, it is ensured that the industrial PC stays connected all the time.

Highlights and technical facts at one glance:

spo-comm offers Mini-PC solutions for industry and trade in Germany and Europe with special expertise for digital signage. The company was founded in 2003 by its CEO is Michael Sporrer. The Mini- PC specialist offers a wide range portfolio from hardware, software and services up to complete supply chain management – always with a perfect fit. Thanks to the great customer support and technical teams spo-comm carefully meets the customer’s requirements. spo-comm has a dense network of hardware partners, and is is one of the most important of MSI IPC partners in Europe.