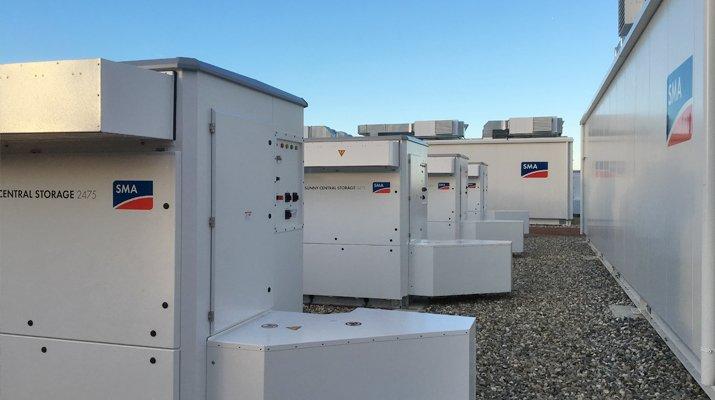 28. Juni 2018 Firma SMA Solar TechnologyOptische Technologienbattery, energy, financial, inverters, mwh, power, securities, sma, solar, statements, storage, sunbelt, sunny, wind, with
SMA Solar Technology AG (SMA) has supplied the entire system technology for Europe’s biggest battery storage power plant in Pelham, England. The large-scale storage system in the county of Hertfordshire, with a connected load of more than 60 MVA, is one of a number of projects currently under construction in England to provide the reserve power necessary for frequency control and, therefore, to compensate for grid fluctuations. The 26 Sunny Central Storage battery inverters supplied by SMA integrate a modern storage system with lithium-ion batteries in the utility grid to provide the grid operators with a range of grid management services.

“Pelham is a flagship project in Europe and delivering more than 60 MVA of power, one of the largest of its kind worldwide,” said Dr. Enrique Garralaga Rojas, head of Project Development at SMA Sunbelt Energy GmbH. “In addition to the battery inverters, SMA Sunbelt Energy GmbH supplied a power management system specially designed for the system and a SCADA solution. This will allow the large-scale storage system to be optimally charged and discharged according to grid requirements.”

Constructed in less than six months
The storage project in Pelham was constructed together with SMA’s subcontractor British Solar Renewables Limited in a record time of less than six months and is the largest single battery storage power plant in Europe. The operator is the British company Statera Energy Limited that is the developer and owner of a number of other large-scale systems. With a capacity of 50.06 MWh, the system compensates for frequency fluctuations in the island nation’s utility grid. These fluctuations are relatively high due to the insufficient capacities of the connection to the European utility grid and the high proportion of electricity generated by off-shore wind turbine systems.

“SMA made a vital contribution to ensuring not only that this innovative storage system project was implemented in such a short time, but also that the test phase was completed without problems in record time,” said Tom Vernon, general manager of Statera Energy Limited. “We chose SMA’s highly sophisticated system technology because we were so impressed with its reliability and high level of availability.”

In 2017, SMA supplied system technology with about 400 MW of power for a variety of large-scale storage projects worldwide. Sunny Central Storage battery inverters for integrating state-of-the-art battery-storage systems make a key contribution to the continued growth of renewable energies because they provide grid management services for stabilizing the utility grid.