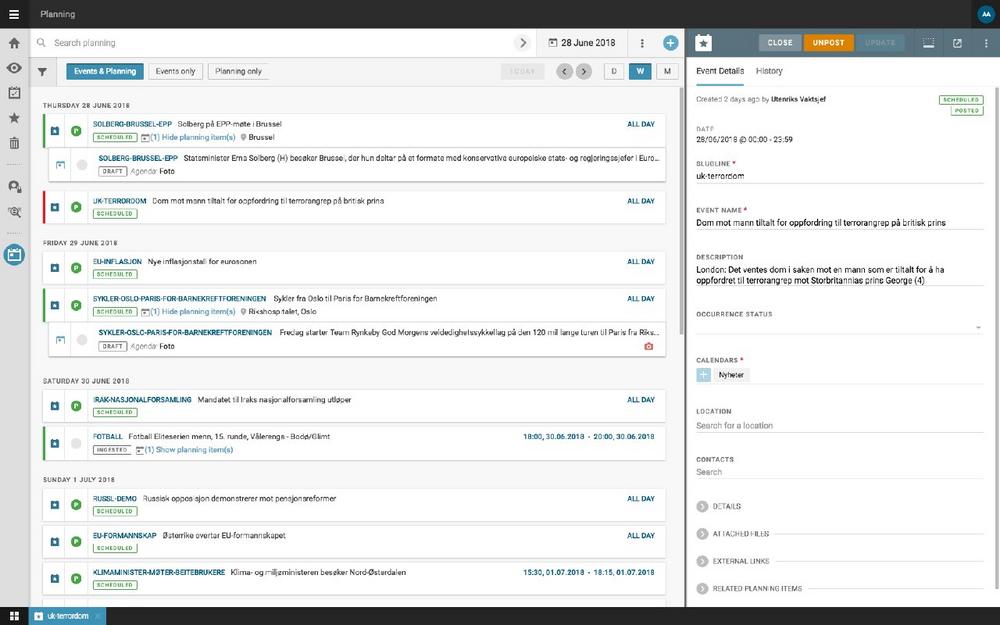 Developed in collaboration with news agencies the Australian Associated Press (AAP) and NTB, this latest Superdesk module will allow users to plan content ahead of time for elections, festivals or any other kind of event, supporting ingest from outside calendars and easy integration with third-party applications or publishing platforms.

“Planning is at the heart of the newsroom in a news agency. Integrating it into the CMS makes the process of planning more intuitive and a natural part of the workflow. Superdesk planning component makes it easier for reporters and editors alike to contribute efficiently to keeping calendars and schedules up to date.”

Sticking to their policy of creating tools ‘by journalists, for journalists’, the first concept for Superdesk Planning Component was the product of a two day workshop held at Sourcefabric’s head office in Prague, with their customers NTB, AAP, Finland’s news agency STT and Czech news agency CTK in attendance. Between them, they discussed their most pressing needs in the newsroom and agreed upon the most important four qualities that the proposed editorial planning tool should deliver: efficiency, integration, flexibility and automation.

After months of work, this first release of Superdesk Planning Component answers to all these requirements and more, offering users one hub in which to consolidate their forward planning tools, editorial calendars, and assignments. Third party applications and publishing platforms can be easily connected, and Superdesk Planning Component is flexible enough to function as a standalone application (as well as integrating natively with Superdesk).

“We at Sourcefabric say that our tools are made by journalists for journalists. The Superdesk Planning Component is exactly that – we have involved editors in the process from conceptualisation to prototyping and testing. Although there are many different workflows among our customers, I think we have a very powerful universal planning tool designed by real experts in the field.”

In the era of the 24 hour news cycle, and with newsrooms needing to do more than ever with fewer resources, Superdesk Planning Component comes with a host of features designed to help newsrooms keep up. Editors will be able to plan coverage ahead of time by creating events, planning items or defining coverage activities and then assigning them to a desk or a journalist. The content created for an event will also include the event metadata, meaning journalists won’t have to fill it in themselves later on.

As well as having the capacity to ingest event data from external calendars like Google Calendar, Superdesk Planning Component will allow newsrooms to create and manage their own events using the metadata fields defined by the EventsML standard. Geolocation can also be added to event planning in the form of a map showing the event’s location, and an inbuilt address book can be used to easily access contacts for a story without having to comb databases for their details.

Superdesk is an end-to-end open source headless CMS for news agencies, newspapers and corporate publishers. Superdesk is developed in partnership with media organisations worldwide, including national news agency heavy-weights such as the Australian Associated Press (AAP) and Norway’s Norsk Telegrambyrå (NTB) where it is in live production. Superdesk is developed with commercial media partners and independent contributors as an open-source project.

Sourcefabric is Europe’s largest open-source software house serving the news media industry. Headquartered in Prague, Czech Republic, Sourcefabric z.ú. brings together minds from all corners of the globe. All of our tools are open source and free to download: Superdesk, Live Blog, Airtime, and Booktype.
www.sourcefabric.org