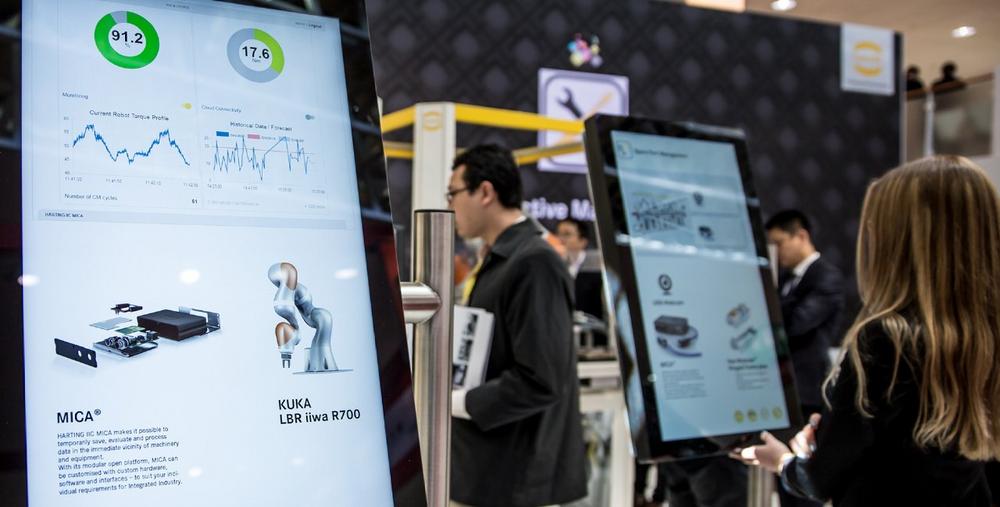 28. März 2019 Elektrotechnikabb, azure, cell, cells, cloud, expleo, harting, iiwa, kuka, microsoft, mtek, nokia's, rfid, robot, with
Collaborative robots, or "Cobots", have until now been responsible for rough work; but in the future, they will take over more and more activities – working side by side with humans. In cooperation with customers and partners, HARTING will be presenting various scenarios and technologies "with sensitivity" at the HANNOVER MESSE.

"To Luke, from Dad," is written on the little yellow box. The KUKA lightweight robot had just placed the white HARTING-imprinted SIKU car in the box. Another KUKA robot carries it past the trade fair visitors and on to the next production cell, where the second vehicle is already waiting for Luke. Dad had placed the order a few days earlier using the web-based configurator specially set up for this purpose. He then placed the order at HARTING’s HANNOVER MESSE stand (Hall 11/C15) using a QR code on his mobile phone.

HARTING’s "HAII4You" Smart Factory demonstrates the full vertical integration of a toy car from the customer to the versatile product manufacturing, divided into self-sufficient yet fully networked production cells. The activities in each production cell are carried out by a collaborative KUKA lightweight robot. Goods are transported between the cells by a mobile KUKA iiwa robot.

PerFact Innovation, a partner company in the MICA.network, has additionally created digital twins of the facility and the robots. This generates a digital image of production processes that can be used to visualise and simplify remote maintenance and condition monitoring. The company Expleo reads out the torque forces on the robot grippers in order to detect signs of wear. For this, the data stored in the Microsoft Azure cloud is evaluated and compared with historical data. The facility at the HARTING stand will demonstrate the entire spectrum of modern production methods and connectivity that are associated with the trade fair’s theme: Integrated Industry – Industrial Intelligence.

A workplace for the intelligent, collaborative assembly of small parts is MTEK’s business model. This young company from Sweden is demonstrating an assembly workstation with a collaborative robot at the HARTING stand. The two-armed ABB robot can detect and grasp small objects. It is used side by side with humans for performing assembly work and manual tasks.

MTEK’s business model is software-as-a-service for executing and controlling processes. "MICA and RFID turn the assembly workplace and the process sequence into an integrated unit with complete traceability," Olaf Wilmsmeier, Business Development Manager of RFID at HARTING, explains his satisfaction in cooperating with the Swedes. Wilmsmeier has provided support for MTEK as they implement HARTING’s UHF RFID technology. He already knows the company from NOKIA’s joint "Factory in a Box" project, which was one of the highlights at the 2018 HANNOVER MESSE.

Simulation of human gripping processesResearchers have been working on further developments for the gripping processes of robot arms and grippers and enriching them with haptic perception. In cooperation with Shadow Robot Company Ltd, HARTING demonstrates just how advanced technologies are in this field. This British company has constructed a robot hand with the functionality and dimensions of a human hand so that it can develop algorithms for simulating human gripping processes. The hand has 24 joints, 20 of which can be controlled independently from each other. Its ability to rotate in all directions enables it to get a precise and reliable grip on objects.

Multi-functional sensors have been built into the fingertips to measure various functions such as pressure sensitivity, temperature and vibration. The fingertips of the robot hand have been created at HARTING AG Biel in Switzerland using 3D-MID (Mechatronic Integrated Device) technology. This makes it possible to equip sensor functionality directly into a three-dimensional base body.

The HARTING Technology Group is one of the world’s leading providers of industrial connection technology for the three lifelines of Data, Signal and Power and has 14 production plants and 44 sales companies. Moreover, the company also produces retail checkout systems, electromagnetic actuators for automotive and industrial series use, charging equipment for electric vehicles, as well as hardware and software for customers and applications in automation technology, mechanical and plant engineering, robotics and transportation engineering. In the 2017/18 business year, some 5,000 employees generated sales of EUR 762 million.