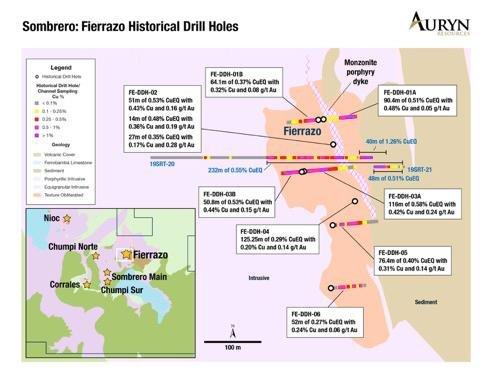 Significance of the Results:

“The presence of a cohesive copper-gold exoskarn body at Fierrazo has given us a great deal of confidence in terms of discovering other large-scale exoskarn bodies, which could make Sombrero a world-class discovery. Fierrazo is only a small window into the potential sub-surface mineralization and we are very excited for what’s to come for the rest of the Sombrero Main system, where drill permits are in process.”

The historical drilling at the Fierrazo target has defined a cohesive body of copper-gold exoskarn mineralization at the lateral contact between the Ccasscabamba diorite sill and the Ferrobamba limestones and Upper Mara shales and siltstones (Figure 2). The exoskarn body is characterized by massive to semi-massive magnetite and disseminated chalcopyrite and pyrite mineralization that can be cut by high-grade gold retrograde structures with chlorite and epidote alteration. Copper-gold is hosted within the Ferrobamba limestone, the calcareous shales and siltstones of the Upper Mara Formation, within late-stage monzonitic porphyry dykes, and as endoskarn mineralization within the Ccasscabamba diorite sill (Figures 2, 3, 4, 5, & 6).

The majority of the drilling at the Fierrazo target intersected copper-gold mineralization within the calcareous sediments of the Upper Mara Formation due to the fact that the majority of the Ferrobamba limestone has been eroded away at this target area (Figures 7 & 8). This is important as it demonstrates an additional 70 – 100 meters of prospective stratigraphy for copper-gold mineralization that had been previously unrecognized within the Sombrero project area. Combining the Upper Mara Formation with the 225 meters of the Ferrobamba limestone along the margins of the Ccasscabamba diorite sill demonstrates a minimum of 300 meters of prospective stratigraphy for exoskarn mineralization within the Sombrero project area.

Collectively, the historical drill holes define a mineralized body totaling 300 meters of strike length with an average width of approximately 150 – 200 meters that is open both to the north and to the south (Figure 1). The average grades of all intercepts within the historical core is 0.5% copper equivalent, calculated using a 0.15% copper cut-off grade, as presented below in Table 2. This average grade compares favorably to other deposits in the Las Bambas district such as Constancia, Antacapay, Haquira, and Las Bambas projects (Table 3). In addition, when calculating the average grades based on the lithology within the historical drill core at Fierrazo, it is observed that the grade within the calcareous shales and siltstones of the Upper Mara Formation is 0.46% copper equivalent compared to 0.59% copper equivalent within the Ferrobamba limestone (Table 4). Auryn’s technical team believes it is then reasonable to assume this grade relationship will be consistent when exploring other exoskarn targets, such as at the Chumpi target where higher grades could be encountered within the Ferrobamba limestone (Figure 9).

Michael Henrichsen, P.Geo, COO of Auryn, is the Qualified Person who assumes responsibility for the technical disclosures in this press release.

ON BEHALF OF THE BOARD OF DIRECTORS OF AURYN RESOURCES INC.

Auryn Resources is a technically-driven, well-financed junior exploration company focused on finding and advancing globally significant precious and base metal deposits. The Company has a portfolio approach to asset acquisition and has seven projects, including two flagships: the Committee Bay high-grade gold project in Nunavut and the Sombrero copper-gold project in southern Peru. Auryn’s technical and management teams have an impressive track record of successfully monetizing assets for all stakeholders and local communities in which it operates. Auryn conducts itself to the highest standards of corporate governance and sustainability.

This project consists of the North Sombrero and South Sombrero properties, comprising over 120,000 hectares of mineral claims owned or optioned by Auryn Resources. The copper-gold Sombrero mining concessions are located 340 kilometers SE of Lima in southern Peru and are hosted in the Andahuaylas-Yauri belt. This belt is interpreted to be on the north-western margins of this Eocene-Oligocene aged copper-gold porphyry and skarn belt that hosts the Las Bambas, Haquira, Los Chancas, Cotambambas, Constancia, Antapaccay and Tintaya deposits. The project is characterized by a strong structural control and significant copper and gold values from historical surface samples. The principle targets at Sombrero are copper-gold skarn and porphyry systems and precious metal epithermal deposits.

Sample intervals averaged 2 meters where historical sample intervals taken and otherwise were 2 meters. Where at least half of HQ diameter core was present it was sawed into equal parts on site. Otherwise historical crush rejects were used in lieu of the core. In total 481 quarter core, 20 half core, and 10 crush rejects, approximately 3-5kg each, were sent to ALS Lab in Lima, Peru for preparation and analysis. All samples were assayed using 30g nominal weight fire assay with atomic absorption finish (Au-AA25) and multi-element four acid digest ICP-AES/ICP-MS method (ME-MS61). Where MS61 results were near or greater than 10,000 ppm Cu the assays were repeated with ore grade four acid digest method (OG62). QA/QC programs using internal standard samples, field and lab duplicates and blanks indicate good accuracy and precision in a large majority of standards assayed.

Intervals were calculated using a minimum of a 0.1% Cu cut-off at beginning and end of the interval and allowing for no more than six consecutive meters of less than 0.1% Cu with a minimum length of the resulting composite of 5 meters.

Copper and gold equivalent grades (CuEq and AuEq) were calculated using gold price of US$1300/oz and copper price of US$3.00/lb.