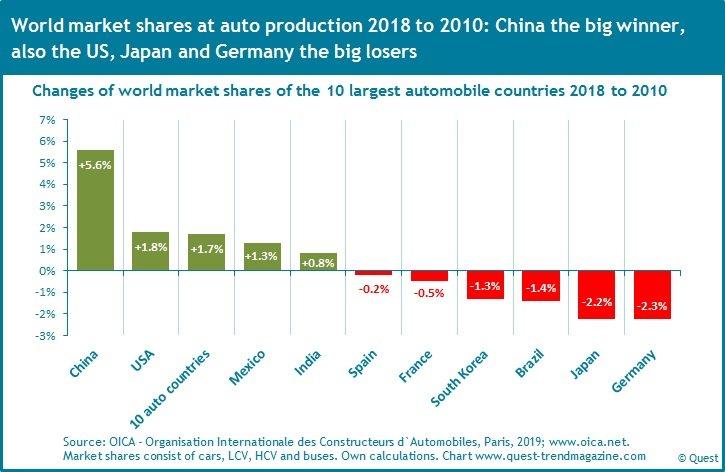 The world’s ten largest automotive countries increased their share of the global automotive production market by 1.7 percentage points to 78.7% in the eight years from 2010 to 2018.

China is the big winner among the ten biggest automotive countries. It increased its world market share by almost 6 percentage points to 29.1%. No other country came close to achieving this growth. And China’s world market share is higher than the combined market shares of the three following countries: USA, Japan and India.

The USA is also among the winners of the last eight years. In second place, they increased their world market share slightly above average by almost 2 percentage points to 11.8%.

Japan and Germany are the big losers of the last eight years. Japan’s world market share shrank by more than 2 percentage points to 10.2%, which is less than the USA’s 11.8%.

The Quest Trend Report on the market shares of the global automotive countries of 2018 compared to 2010 is available on https://www.quest-trendmagazine.com/en/automobile-industry/internationalization/current-status-of-internationalization.html