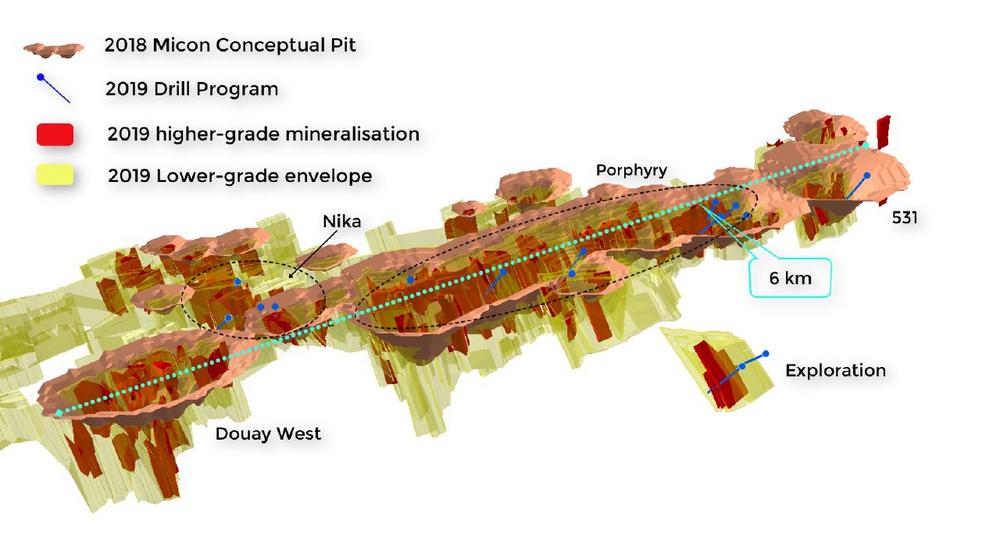 One of Maple Gold’s primary objectives has been bringing the quality of technical work to major company standards. The Company’s exploration team and technical committee leaders have significant major-company experience to draw from, and establishing a new 3D geological, structural and mineralisation model (see press release January 16, 2019 and Fig. 1 below) was identified as a critical next step for numerous reasons.

Speidel added, “We elected to drill our lone 531 Zone drill-hole this year using our new 3D model (see Fig. 1 above).  The assay results from that drill-hole were within the top five ever drilled on the property. These models are dynamic and evolve as additional data is included, but the foundation we have established puts us in a great position to be more efficient with the drill-bit and accelerate our exploration and development path going forward.”

The potential of the immediate target area along the interpreted trend to the southeast of this year’s intercepts from DO-19-262 is currently being evaluated. This interpreted zone of higher grade gold mineralisation is defined by multiple high-grade intercepts from two different drill-holes (including D-92-39, which intersected 30m of 3.3 g/t Au and 10m of 5 g/t Au; and DO-19-262: which cut 28m of 2.55 g/t Au and 51m of 2.81 g/t Au – see press release June 5, 2019); these intercepts currently occur at vertical depths of as little as 250m, and extend at least to vertical depths of 400m. The Company’s current working hypothesis indicates that this higher-grade zone remains open for more than 350 metres to the southeast. The Company is currently reviewing core from historical drill-holes in this area with the aim of characterising the stratigraphy and refining its target concepts in advance of a potential drill campaign focused on the 531 Zone during the fall. The Company expects to report further interpretations with corresponding figures and drill targets this summer.

2019 drilling in the Nika Zone has provided additional support for the significance of this new mineralised zone, which now extends over a distance of approximately 650m along strike, linking two existing smaller conceptual pits (Micon 2018) and providing an interpreted link to the Porphyry Zone as well. Nika Zone mineralisation will be included in the new resource estimation update which is being prepared by Roscoe Postle Associates Inc. (RPA).

Drill results from the most recent campaign showed the presence of higher-than deposit average grades both near surface, and at moderate depths, thereby providing further support for the Company’s current concept of an eventual open-pit extraction scenario, which could be followed by a subsequent underground expansion.

The Company continues to work with RPA on refining the latest wireframes using the Company’s geological model, along with the latest drill data from the recently completed 2019 campaign. Maple Gold anticipates reporting a new baseline resource estimate early this fall that is expected to contemplate an optimized open-pit plus initial underground expansion scenario.

Maple Gold’s President and CEO, Matthew Hornor, stated: “The gold market is finally showing signs of potential breakout and we have not wavered in our belief that moving the Douay Gold Project forward in a measured way during challenging times will put us in a favourable position as we aim to leverage all of the modeling and technical work that’s been completed over the past 18 months. We limited our winter drilling campaign to 60% of initially planned meterage to conserve capital for priority follow up work and to provide more financial flexibility as we evaluate various strategic alternatives during the second half of the year.”

The scientific and technical data contained in this press release was reviewed and prepared under the supervision of Fred Speidel, M. Sc, P. Geo., Vice-President Exploration, of Maple Gold. Mr. Speidel is a Qualified Person under National Instrument 43-101 Standards of Disclosure for Mineral Projects. Mr. Speidel has verified the data related to the exploration information disclosed in this news release through his direct participation in the work.

Maple Gold implements strict Quality Assurance (“QA”) and Quality Control (“QC”) protocols at Douay covering the planning and placing of drill holes in the field; drilling and retrieving the NQ-sized drill core; drill-hole surveying; core transport to the Douay Camp; core logging by qualified personnel; sampling and bagging of core for analysis; transport of core from site to ALS laboratory; sample preparation for assaying; and analysis, recording and final statistical vetting of results. For a complete description of protocols, please visit the Company’s QA/QC page on the website at:

Maple Gold is an advanced gold exploration and development company focused on defining a district-scale gold project in one of the world’s premier mining jurisdictions. The Company’s ~355 km² Douay Gold Project is located along the Casa Berardi Deformation Zone (55 km of strike) within the prolific Abitibi Greenstone Belt in northern Quebec, Canada. The Project benefits from excellent infrastructure and has an established gold resource3 that remains open in multiple directions. For more information please visit www.maplegoldmines.com.