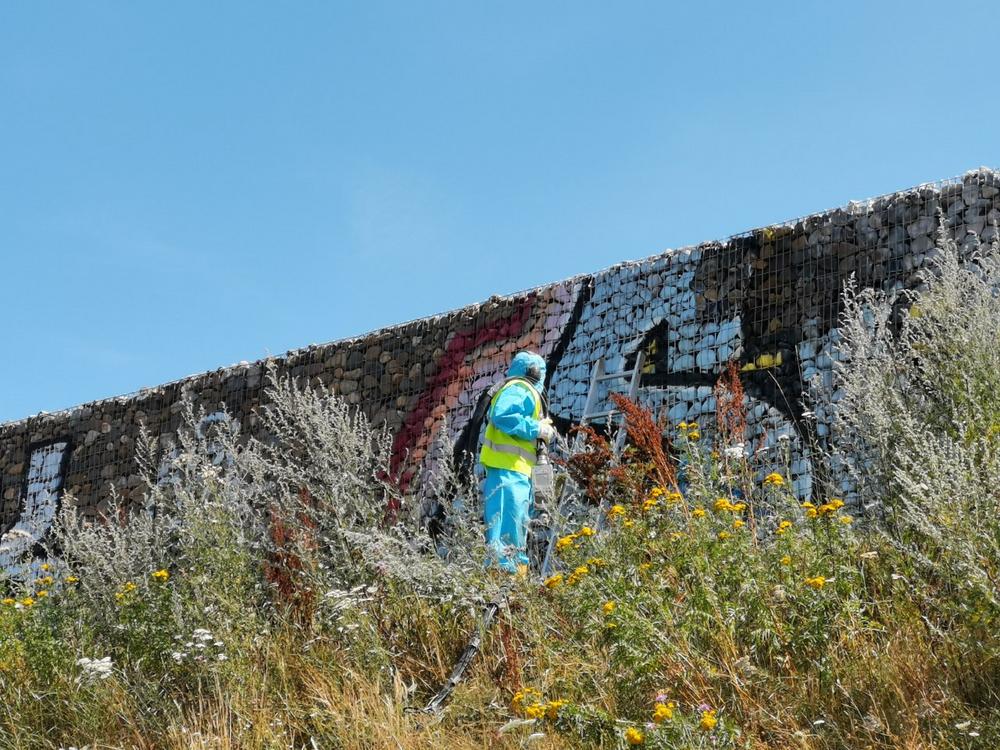 Kipp Umwelttechnik developed a blasting nozzle for these special requirements, which has sufficient power to remove the sometimes large-area paint marks even at a fast cleaning speed. Kipp Umwelttechnik used the PowerMaster blasting unit from its sister company mycon GmbH for this purpose. The unit was specially equipped so that – some of the gabions were far away from the motorway – the truck can stand on the stationary lane. The devices were located in the truck and were controlled from there. Only the hose package and the blasting gun had to be pulled up to the gabions. The vehicles of Kipp Umwelttechnik were secured by a security vehicle of the client.

Kipp Umwelttechnik was able to completely remove the graffiti in the planned time.

In the field of industrial cleaning, Kipp Umwelttechnik GmbH is the specialist for thorough and gentle cleaning in industry and for building cleaning.

Kipp Umwelttechnik GmbH was founded in 1991 as a sister company to the construction company Jens W. Kipp Tiefbau GmbH, which has existed since 1971. Both companies are businesses managed by entrepreneurs.

mycon GmbH has added to the group made up of Kipp Umwelttechnik GmbH and Jens W. Kipp Tiefbau GmbH since 2002.

As a sister company to the service business Kipp Umwelttechnik GmbH, mycon GmbH is involved with the development, production and sale of new products and automation technologies.

mycon GmbH currently supplies to customers in approx. 40 countries.
Many years of experience from the field of industry service led to several systems developments and patents, some of which with international recognition. mycon GmbH takes care of customer groups from a variety of industry and service fields.