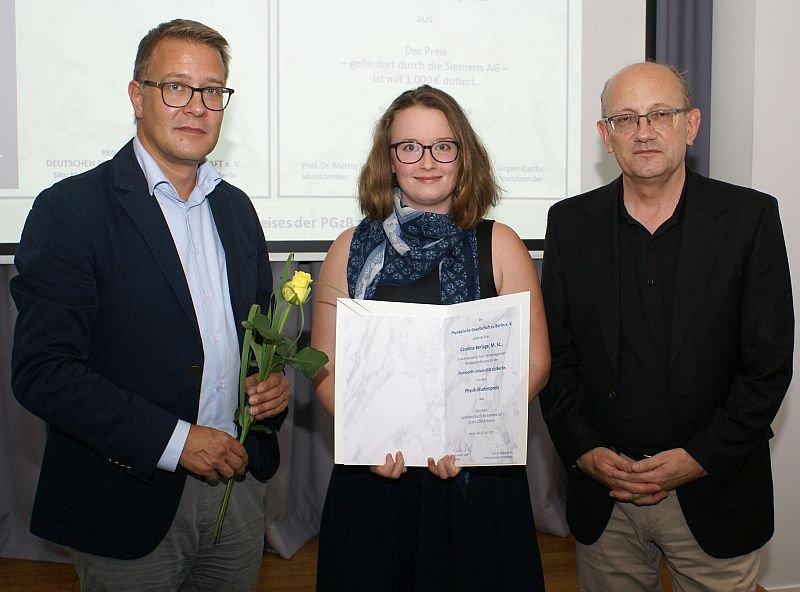 7. August 2019 Firma PicoQuantOptische Technologienantibunching, award, deutschlandstipendium, molecules, photon, photonics, physics, physik, picoquant, research, science, studienpreis, women
Caroline Berlage, a former student at PicoQuant, is one of this year’s winners of the prestigious Physik-Studienpreis awarded by the Physikalische Gesellschaft zu Berlin. Caroline studied Physics at the Humboldt-Universität zu Berlin and carried out the experimental work for her master’s thesis from 2016 to 2019 at PicoQuant as well as the laboratory of Prof. Oliver Benson. PicoQuant supported Caroline during her master studies with a “Deutschlandstipendium” scholarship. Upon hearing of the jury’s decision, Caroline said: “I’m very happy to receive this honor and I’m grateful to PicoQuant for their ongoing support during my studies. Working at PicoQuant for my master’s thesis gave me the opportunity to gain insights not only into scientific research but also to learn about industrial R&D.” The prizes were awarded on July 11, 2019 during an open ceremony at the Magnus-Haus in Berlin.

PicoQuant is a company with an emphasis on research and development whose founders all had the chance to get an outstanding education at the Humboldt-Universität zu Berlin. “We feel very strongly that we should give something back”, says Rainer Erdmann, the company’s Managing Director, “We would like to inspire young people, especially women, to pursue scientific careers. We see the “Deutschlandstipendium” as an excellent program to do so. It provides not only financial support but also enables a close collaboration between academia and industry.”

In her master’s thesis, entitled “Counting Molecules by Photon Statistics”, Caroline used a promising new technique to count molecules based on the photon antibunching effect. A central aspect of her work was to systematically investigate this method for imaging artificial as well as biological samples under a wide range of experimental conditions.

PicoQuant is a leading research and development company specializing in optoelectronics, which was founded in 1996. The company, based in the science and technology park of Berlin-Adlershof, Germany, is a worldwide leader in the field of single photon counting applications. The product portfolio encompasses picosecond pulsed diode lasers and LEDs, photon counting instrumentation, fluorescence lifetime spectrometers, FLIM and FCS upgrade kits for laser scanning microscopes as well as time-resolved confocal and super-resolution microscopes. Since April 2008 Sales and Support in North America is handled by PicoQuant Photonics North America Inc. The PicoQuant group employs currently around 80 people.