It keeps growing.. the range of DNV-GL-approved RUD products 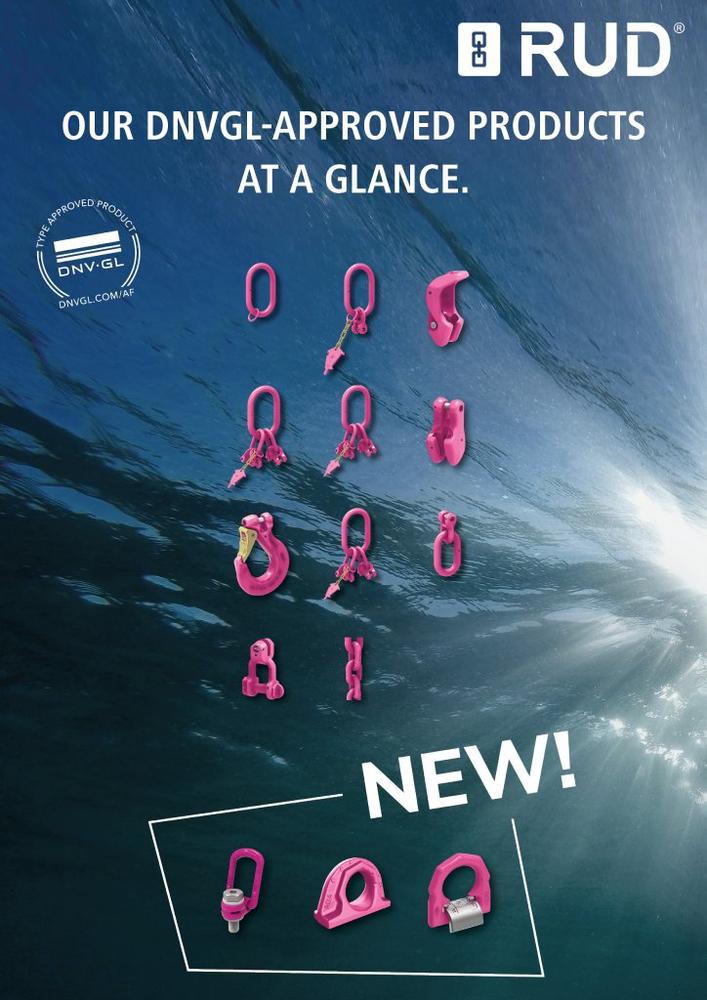 16. August 201919. September 2019 Firma RUD Ketten Rieger & Dietz GmbH u. Co.Produktionstechnikaba, dnvgl, gas, lifting, maritim, offshore, oil, platform, rud, salt, sea, ship, solutions, water, wind
Users of RUD products value the quality and safety of the brands developed by the Swabian think tank. The fact that RUD stands for absolute reliability in the maritime and offshore sector too is underlined by the DNV•GL seal of approval that RUD has now received for another three product groups in addition to its VIP chain slings.

With the TA certificate (type approval) TAS0000203 for the RUD products ABA, VLBG (PLUS) and the VLBS, RUD lifting points have been officially approved in accordance with the very latest DNV•GL standards DNV•GL-ST-0377 and DNV•GL-ST-0378 for lifting gear on ships or offshore structures (offshore and platform lifting gear). The quality products are used where sturdy solutions are in particular demand: primarily in rough conditions during work in the sea. Salty water and a high salt content in the air, extreme temperatures and extreme wind loads not only make great demands on the work force, but on the material too.

“Following the RUD chain slings of VIP grade 100 (6-22mm), which were developed especially to defy the tough ambient conditions, the popular RUD lifting points have now been granted type approval by DNV•GL,” explains David Jaramillo, Manager of Business Development Marine & Offshore, Division Lifting and Lashing Systems. “The type approval is proof of compliance with the latest DNV•GL standards – and thus officially confirms the outstanding robustness and reliability of our solutions. Our certified lifting gear is often used for ship equipment, machinery systems and other applications.” In the maritime sector this includes lifting tasks on board ships and in harbours, but also on board offshore platforms or in shallow water areas. “Whatever the application: where structural and plant parts weighting several hundred tonnes have to be lifted safely, our RUD products are at their most impressive.”

Excellently suited for offshore use is the RUD ABA load ring for welding, one of the newly certified products. “The ABA is forged, hardened and phosphated from the high-strength material CrNiMo for enhanced material strength and wear resistance. It can be subject to loads in all directions, used at temperatures down to -40 degrees and with a safety factor of 4:1,” David Jaramilo explains. The patented wear marks on the ring are a clear indication to the user whether wear exceeds 10% and the ring has to be replaced in order to ensure maximum possible safety.

Having received the certificate, RUD is authorised to use the quality mark “DNV•GL” for the certified products. “This means that users of our solutions can see at a glance that they can rely on the quality and reliability of RUD lifting means,” concludes David Jaramillo.

RUD Ketten Rieger & Dietz GmbH u. Co. KG, founded in 1875 by Carl Rieger and Friedrich Dietz in the Swabian city of Aalen, Germany, achieves with over 1700 employees in more than 120 countries an an-nual turnover of 200 million Euro. At locations, among others in Germany, Australia, Brazil, China, India, Romania and the USA, the family business manufactures, apart from sling technology, lashing technolo-gy and Non-skid chains also hoist chains and conveyor systems. With the ERLAU brand, the German traditional company also manufactures tyre protection chains and property furnishings for indoor and out-door areas.