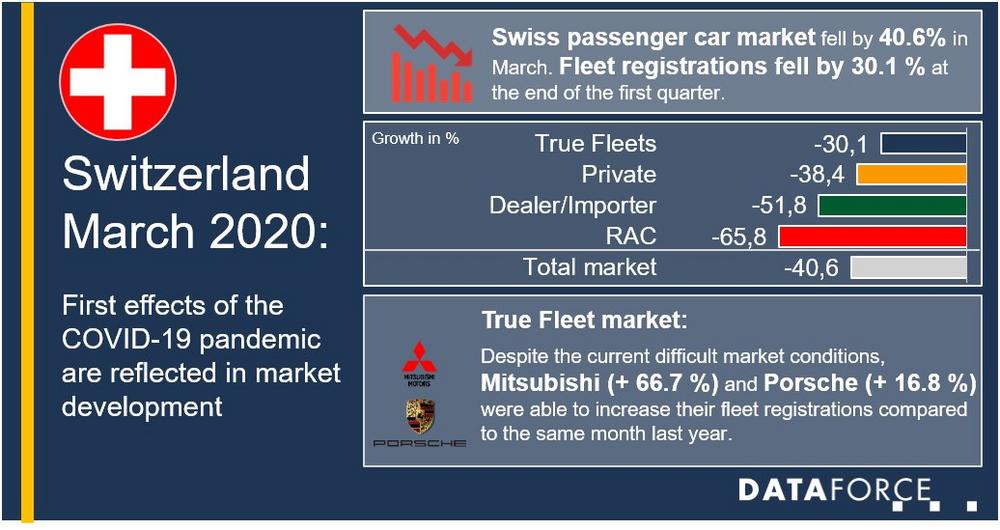 20. April 202020. April 2020 Firma Dataforce Verlagsgesellschaft für Business InformationenFahrzeugbau / Automotiveaudi, bmw, car, covid, drilling, ford, market, mercedes, mitsubishi, octavia, porsche, strong, vehicles, volkswagen, with
The effects of the corona pandemic have contributed to a significant slump in the Swiss passenger car market at the end of the first quarter. Just over 17,350 registered passenger cars in March represented a decline of 40.6% compared with the same month last year. Registrations of light commercial vehicles were also affected by this development – albeit not quite as strongly – with a decline of 23.0%.

In the last month of the first quarter, the Swiss passenger car market took a heavy downturn under the influence of the Covid-19 pandemic. While the private market presented itself in deep red with a minus of 38.4%, commercial registrations even faced a decline of 43.3%. This means that registrations at overall market level in March fell by a total of 40.6% compared to the same period last year.

The current developments had varying degrees of impact on the commercial retail channels: Company registrations in the True Fleet market fell by 30.1% in March. At the end of the first quarter, they were thus 20.6% down on the same quarter of the previous year. Combined self-registrations of dealer/importer fell by 51.8% in March and car rental registrations by as much as 65.8% down on the same month last year.

Contrary to the negative developments in the True Fleet market, there were also importers within the top 15 brands who developed positively in March: Mitsubishi (+ 66.7%) bucked the trend just as successfully as Porsche (+ 16.8%). Audi (- 1.8%) was almost at the same level in March as in the same month of the previous year and therefore ranked fifth. Porsche in particular confirmed its strong performance in terms of fleet registrations since the beginning of the year, closing the first quarter with by far the strongest growth (+ 96.2%) of all top 15 importers.

Registrations of light commercial vehicles up to 3.5 tones were also unable to escape the difficult market conditions and fell by 23.0% compared to last March. This affected both the private market (- 14.1%) and noticeably commercial registrations (- 25.1%). Drilling into the numbers, the True Fleet market fell by 19.3%, registrations of dealer/importer by 51.3% and car rental registrations by 40.4%.

Despite the difficult market environment in March, Ford (+ 5.2%) and Citroen (+ 1.9%) were able to increase their fleet registrations compared to the same month last year. At the end of the first quarter, Volkswagen (+ 21.3%) was in first place in the favor of the Swiss fleet managers. They were followed by Ford (+ 9.6%) and Mercedes (- 12.3%).

Dataforce is the leading provider of fleet market data and automotive intelligence solutions in Europe. In addition, the company also provides detailed information on sales opportunities for the automotive industry, together with a wide portfolio of information based on primary market research and consulting services. The company is based in Frankfurt, Germany.