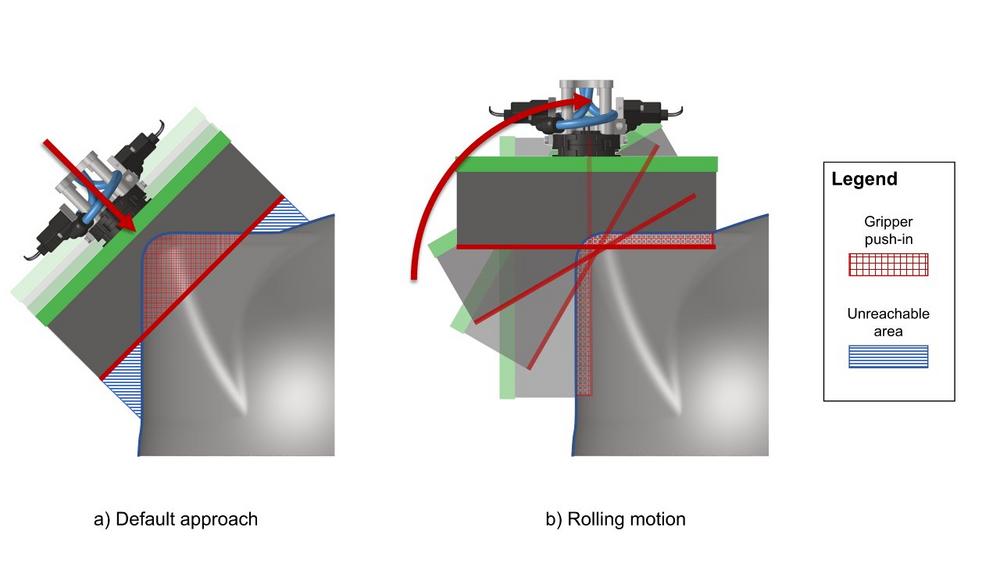 One of the core features of the Fiber Patch Placement (FPP) technology is the usage of a form-flexible gripper to apply patches of different materials on an almost arbitrarily shaped surface. The gripper can apply patches of up to DIN A4 size as of today to highly curved large surfaces, e.g. of aerostructures. But in certain convex areas the process is limited by the height of the gripper body. Which means, when the size of the gripper is too large in relation to some limiting surface features of the part, its base plate would touch the surface before the edges of the patch could come into contact. Up to now, an in-process gripper exchange system enabled processing of such areas with smaller grippers and patches. In addition to that, now Cevotec’s newly developed rolling motion feature comes into play.

Instead of applying the patch along a single normal, the contact point rolls along a curve with a different normal for each point of the curve. This behavior is inspired by the rolling movement of a wheel, where the same two points of the wheel and the surface never come into contact. Since the gripper needs to fulfill complex movements, Cevotec’s SAMBA Scale and Multi cells feature six-axis-robots as gripper manipulators. Based on the curvature of the patch, the best contact curve for this purpose is automatically calculated by the FPP-specific ARTIST STUDIO software. This makes it easy for engineers to use this new feature.

ARTIST STUDIO has additionally been enhanced with another important function: One of Artist Studio’s strengths has always been the creation of custom patch patterns, especially for local reinforcements along curvilinear loadpaths. Now, with the brand-new Draped Curve feature, Artist Studio can also support you with the creation of more traditional laminates like biaxial ([0°, 90°]) or quasi-isotropic (QI, e.g. [0°, 90°, +45°, -45°]). In Artist Studio 1.3 Cevotec introduces the new kinematic draping features, enabling our users to predict the shape of applied patches with even further increased accuracy.

With the new function, it’s possible to create FPP laminates with fiber orientations similar to traditional woven fabrics that feature a 90° angle between warp and weft direction, together with the ability to drape this pattern over complex shapes. But it doesn’t stop here: you can also add additional +/- 45° layers that follow the same principle. So now you’re basically only a few clicks away from a QI laminate for you whole part. And it wouldn’t be FPP if you couldn’t still pick any arbitrarily curved line as your 0° reference – enabling more sophisticated patch patterns than ever before.

The Rolling Motion and the Draped Curve features are key developments to further increase the productivity and flexibility of SAMBA production cells. It is our objective to provide the most powerful systems for the industrial production of complex composites.