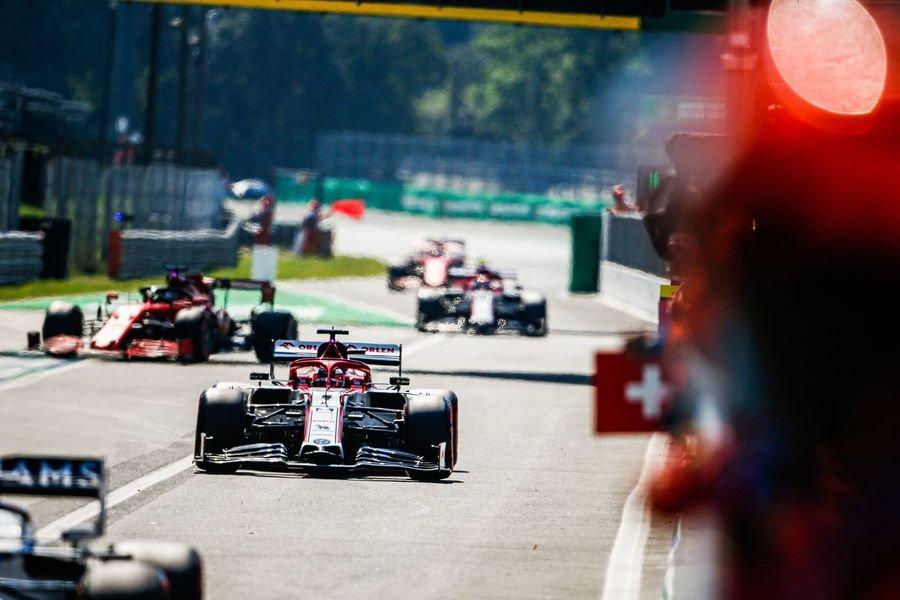 Drivers, team principals, pundits and fans from home: everyone had predicted a messy conclusion to each of today’s qualifying segments: and while the farcical events of last year’s grid shootout were not repeated in their full extent this time around, the final moments of Q1 produced scenes reminiscent more of Milan’s ring road, the Tangenziale, at rush hour than of the famous Temple of Speed.

Cars jostled for position, ducking and diving trying to make the most of their rivals’ tow; alternative lines were tried, spaces sought where none were to be found; and, in the end, few or none improved their laptimes from earlier in the session.

As the cars returned to the pits, thankfully with no carbon fibre being shed, Kimi had done enough to book a spot in Q2, courtesy of P14. Antonio, stuck in traffic and unable to find an opening, set the 18th fastest time in a session that claimed some famous scalps. The Finn would go on to confirm this placement in Q2, booking a spot on the seventh row of the grid and setting up a tasty battle for the race.

When the lights go out tomorrow, we’ll be ready to fight for a place in the top ten once more. As always, we will need to rely on good strategic calls, perfect execution and fast pit stops. A good start would help too, gaining some places in the messy close-combat action of the opening lap: at the very least, today’s qualifying gave us plenty of good practice for that…

Frédéric Vasseur, Team Principal Alfa Romeo Racing ORLEN and CEO Sauber Motorsport AG: “The predictions of a chaotic end of Q1 proved right, and what made the difference was finally the times set in the earlier runs. Kimi performed admirably, putting in a very good lap in his second run and booking a place in the top 15. In Q2, he didn’t feel as at ease with the car but to qualify 14th is still a good result, realistically the most we could have hoped for in these circumstances. Unfortunately, Antonio was caught up in traffic on his Q1 runs and couldn’t make any more progress: hopefully he will produce another good start as he has done recently and climb up a few places, so that we can fight with both cars for a place in the top ten.”

“We can be happy with this result, even though I feel we could have been at least one place higher. On my first runs in Q1, the car balance felt really good, but in my last run with new tyres I had some understeer. In any case, we take this result and we fight from here: hopefully it’s going to be a bit easier starting this high. We knew Q1 was going to be messy and that being in the right place at the right time would be important: it’s not the first time it happened here and it definitely won’t be the last. It felt more like a race start than qualifying, but that’s how it goes. It’ll be interesting to see what the race holds for us: we struggled a bit on long runs yesterday, but the car made a step forward since so hopefully we can be stronger tomorrow. We will do our best and see where we end up.”

“It’s a disappointing result in a tough qualifying session. We knew it would be like this as the tow can make a massive difference: we tried our best but it was not enough. The final run is where you need to get your lap together, but unfortunately I got stuck in traffic at the end of Q1 and couldn’t improve my time: it’s not great but now our focus has to switch to tomorrow. Starting towards the back won’t be easy but we have to try; we did a few changes this morning to improve our race pace and hopefully this will help us with our performance.”

The Sauber Group of Companies is composed of three operational entities: Sauber Motorsport AG, which operates and manages the Alfa Romeo Racing ORLEN Formula One team; Sauber Engineering AG, which focuses on prototype development and additive manufacturing; and Sauber Aerodynamik AG, which conducts full and model-scale testing in the factory’s state-of-the-art wind tunnel and creates ground-breaking innovations in the field of aerodynamics. The companies collaborate closely and share know-how to apply the expertise of more than 500 dedicated individuals at the headquarter in Hinwil, Switzerland, to all internal and external projects. Since its founding in 1970, the passion for racing has been at the heart of Sauber.

For the last 50 years, the innovative Swiss company has been setting standards in the design, development and construction of race cars for various championship series, such as Formula One, DTM, and WEC. Following its own Formula One debut in 1993, Sauber Motorsport AG has established one of the few traditional and privately held teams in the sport. After 25 years of competition in Formula One, the company launched a long-term partnership with Alfa Romeo in 2018 and enters the 2020 championship under the new team name Alfa Romeo Racing ORLEN.