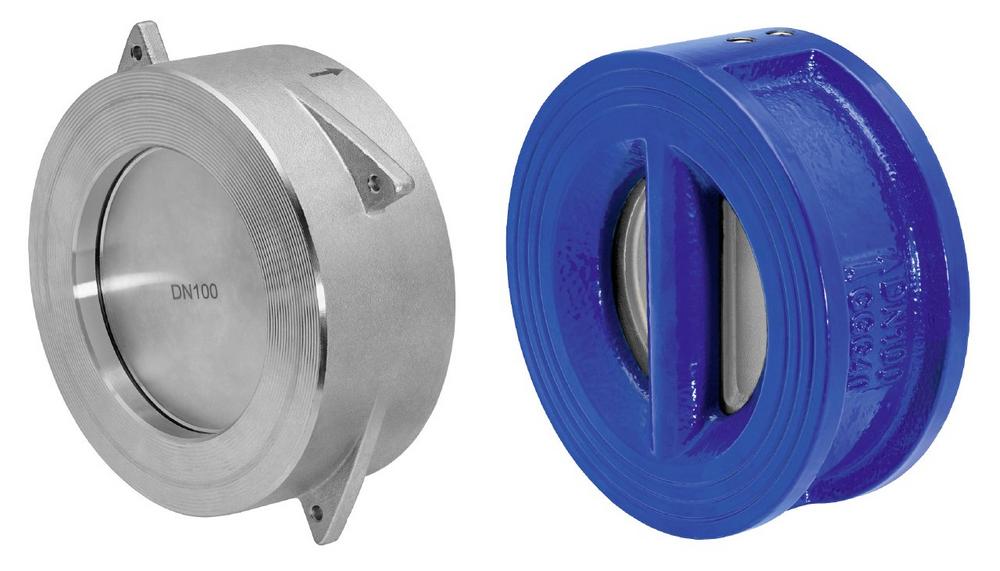 Both check valves are designed for use in industrial applications, particularly in chemical engineering, water treatment, mechanical engineering or in energy and environmental technology. They can be used for liquids, gases and vapours.

In addition to the main function of the GEMÜ R90 as a non-return check, the valve can also be used as a gravity circulation check in cooling and heating circuits. For pump systems, it can be used as a short circuit check or to protect containers and piping as a vacuum breaker. Special disc guidance prevents the valve plug from tilting. The GEMÜ R90 is available in the nominal sizes DN 15 to 300 as an intermediate flange solution in accordance with the ANSI, ASME and EN standards. ATEX, FDA or KTW compliant versions are also available for the GEMÜ R90.

The GEMÜ R91 dual plate check valve comes with two semicircular plates and is distinguished by its low flow resistance. The dual plate check valve can be used as a non-return check in piping systems or also as a short circuit check for pump systems. The GEMÜ R91 check valve also has the advantage that the dual-plate design with springs guarantees a controlled open pressure of the plates. The GEMÜ R91 also has WRAS approval for use up to + 60 °C and is available in the nominal sizes DN 50 to 600 as an intermediate flange solution in accordance with the ANSI, ASME and EN standards.

With soft-seated sealing, the new check valves in accordance with EN 12266-1/P12 achieve leakage rate A.

The GEMÜ Group develops and manufactures valves, measurement and control systems for liquids, vapours and gases. GEMÜ is a global market leader when it comes to solutions for sterile applications.

The globally focused, independent family-owned enterprise was founded in 1964. In 2011, Gert Müller took over as Managing Partner together with his cousin Stephan Müller, becoming the second generation to run the company. The Group achieved a turnover of over €330 million in 2019 and currently employs over 1900 members of staff worldwide, over 1100 of whom are in Germany. They have six manufacturing locations: Germany, Switzerland and France, as well as China, Brazil and the USA. Their worldwide marketing is carried out across 27 subsidiaries, coordinated from Germany. Thanks to a large network of commercial partners, GEMÜ is now active in over 50 countries on all continents.