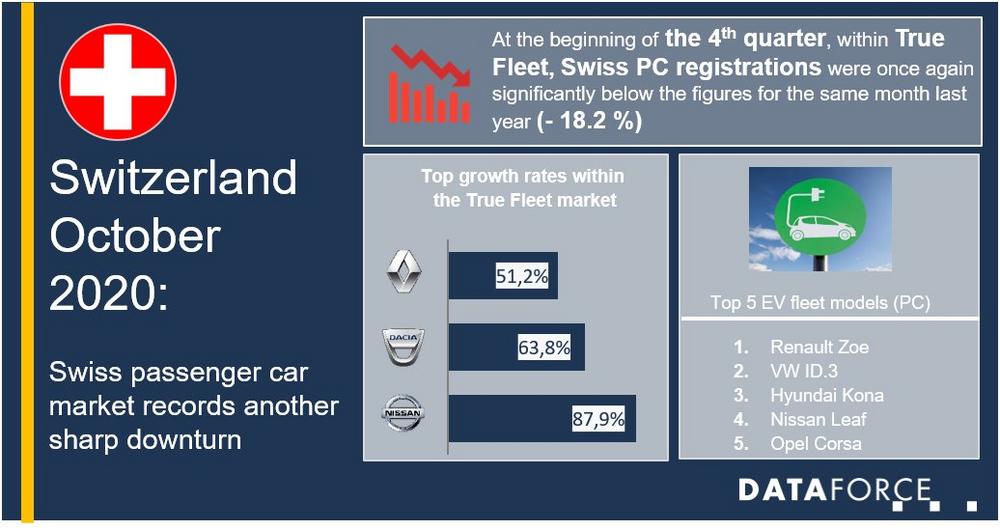 12. November 2020 Fahrzeugbau / Automotivebmw, fiat, hyundai, kona, market, mercedes, new, octavia, registrations, renault, strong, tonnes, vehicles, volkswagen, with
The Swiss passenger car market suffered another strong setback at the beginning of the fourth quarter. This October, just under 20,800 passenger cars were registered, causing the market to slump by a further 20.2% compared to the previous year. Registrations of light commercial vehicles up to 3.5 t were also unable to escape the downward trend and fell by a double-digits (11.4%).

With increasing corona cases and new drastic measures to contain the pandemic, the Swiss passenger car market also saw a return to growing uncertainty. With a decline of 20.2%, passenger car registrations were once again well below the level of the previous year. At market segment level, registrations in the private market fell by 16.0% while Commercial registrations were hit even harder, falling by 25.3%.

A detailed analysis of the Commercial channels showed the True Fleet Market to be down 18.2%. However, the registrations of Dealer/Importer (- 29.6%) and in particular registrations of rental companies declined more sharply, falling by as much as 44.7% compared to the same month of the previous year.

The trend towards electrification of company fleets though has continued unabatedly. Registrations of such vehicles have more than doubled compared to the same month last year (+ 131,6%). The most popular models in October were the Renault Zoe, the VW ID.3 and the Hyundai Kona.

Market development of light commercial vehicles up to 3.5t

The Swiss market for light commercial vehicles up to 3.5 tonnes also fell significantly in October (- 11.4%). Despite this development, the private market managed to increase new registrations for the fifth consecutive month (+ 31.1%). Commercial registrations, on the other hand, fell by 16.9% overall. Company registrations in the True Fleet Market were affected to a similar extent (- 14.6%). Though much greater losses were recorded by Dealers/Importers (- 23.4%) and at the Rental companies (- 46.9%).

Volkswagen not only succeeded in delivering most vehicles to corporate fleets, but also in increasing registrations by 25.9% compared to the same month last year. This makes Volkswagen the only one among the top 10 importer brands to deliver more fleet vehicles in the cumulative period from January to October than in the same period last year. The most registered fleet models in October were the VW Caddy (+ 41.3%), the VW Transporter (+ 13.9%) and the Mercedes Sprinter (- 0.6%).

Dataforce is the leading provider of fleet market data and automotive intelligence solutions in Europe. In addition, the company also provides detailed information on sales opportunities for the automotive industry, together with a wide portfolio of information based on primary market research and consulting services. The company is based in Frankfurt, Germany.