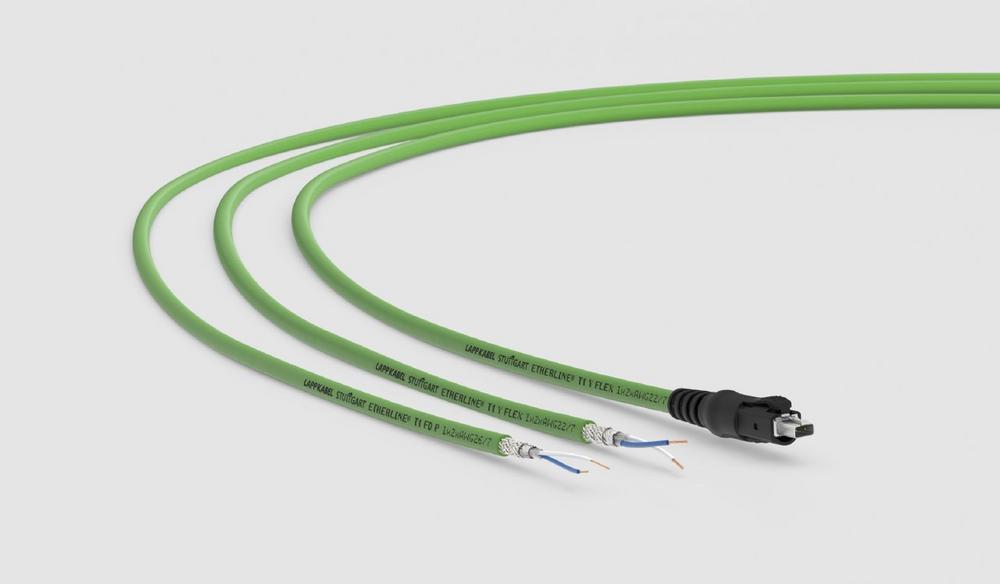 30. März 2021 Firma U.I. LappElektrotechnikconnector, ethernet, hannover fair, Industry 4.0, lapp, mbit, patch cable, single pair ethernet, SPE
Single-pair Ethernet (SPE) is a key technology on the way to the SmartFactory and Industry 4.0. It enables more consistent and more efficient Industrial Ethernet networks and only needs one pair of cores to transmit data. Previously, 2 and 4-pair Ethernet cables have been the standard. This saving enables new smart components to be integrated into the network, which were previously not networked via Industrial Ethernet. With the ETHERLINE® T1 product family, LAPP was ahead of the game in presenting prototype single-pair Ethernet cables for use in industrial machinery and systems. The first single-pair Ethernet cable is now available from stock. As part of its spring launch, LAPP will be introducing the new ETHERLINE® T1 Y Flex 1x2x22/7 AWG.

The ETHERLINE® T1 Y Flex 1x2x22/7 AWG is a UL-certified two-core data cable for high-speed information exchange that maintains the same high data rates while significantly reducing the setup required. Thanks to its small bending radius and small outer diameter, it is exceptionally lightweight and easy to install and is indispensable for connection at the field level.

The new Power-Over-Data-Line compatible cable complies with IEEE 802.3bu and has been specially designed for transmitting digital signals in the frequency range up to 600 MHz over distances of up to 40 m. It enables a simultaneous power and data supply to SPE terminals with low energy consumption (up to 50 W). The design of the SPE cable guarantees ideal protection against electromagnetic interference. Thanks to an aluminium-laminated foil and copper braid screening with a high degree of coverage (SF/UTP), it is double shielded. In addition, the PVC outer sheath is resistant to acids and alkalis and is partially oil-resistant. UL/CSA certification enables the product to be used in North America. As a UL-listed Power Limited Tray Cable (PLTC), the new single-pair Ethernet cable can also be installed openly on cable trays.

Explanation: The IEEE 802.3 bp standard describes a physical layer that permits 1 Gbit/s via single-pair twisted pair copper cables over a distance of 40 m with shielded cables or 15 m with unshielded cables. Possible applications in manufacturing automation include connection of Gigabit communication devices in the control cabinet or sensors with high data rates such as high resolution imaging systems. However, the IEEE 802.3 bw standard allows the same cable lengths for 100 Mbit/s. Particularly because of the reduced distance, this technology may also be of interest for connecting devices in the control cabinet.

"Single-pair Ethernet is an important technology for the future. But to achieve broad market penetration we need standardised and uniform connectors,” says Christian Illenseer, Product Manager Industrial Communication at LAPP. He adds: “You need a single standard to ensure the compatibility of the components. We decided on the SPE Industrial Partner Network because we believe that this standard has the best prospects of success in the market.”

LAPP will also be launching two more innovations in the field of Industrial Communication:

You can also find out about LAPP’s new products at the digital edition of the Hanover Fair from 12 – 16 April 2021.

LAPP has remained in continuous family ownership since it was founded in 1959. In the 2019/20 business year, it generated consolidated revenue of 1,128 million euros. LAPP (including also non-consolidated entities) currently employs approximately 4,575 people across the world, has 20 production sites and around 43 sales companies. It also works in cooperation with around 100 foreign representatives.