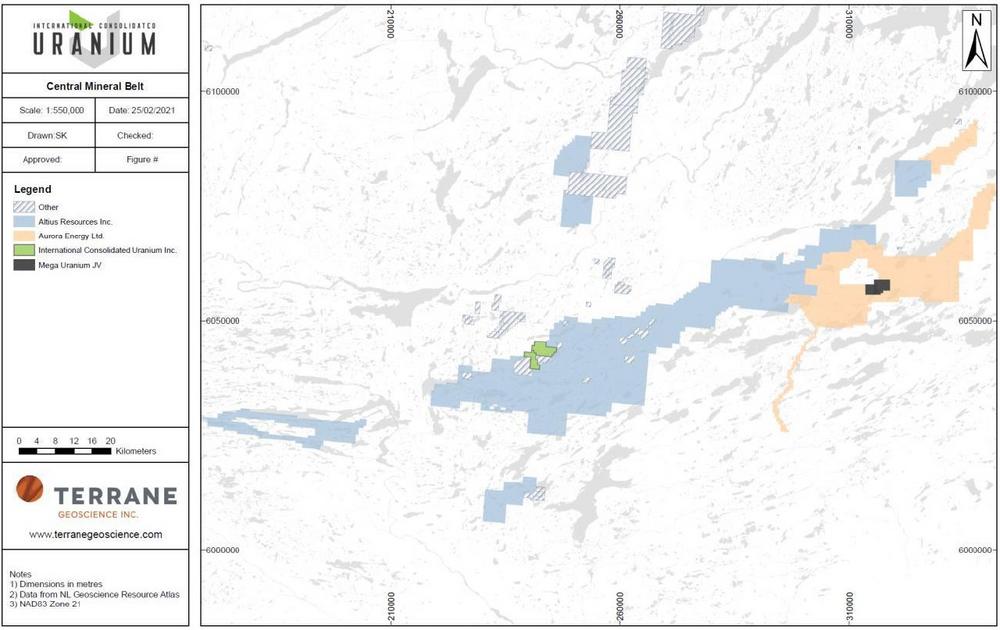 8. April 2021 Firma Swiss Resource CapitalFirmeninternCopper, cur, drill, drilling, epigenetic, fission, isoenergy, mineral, mineralisation, mineralization, salada, statements, u3o8, uranium, with
International Consolidated Uranium Inc. (“CUR” or the “Company” – https://www.commodity-tv.com/ondemand/companies/profil/international-consolidated-uranium-inc/) (TSXV: CUR) is pleased to provide an updated relating to the Moran Lake Project in Labrador (the “Project”). The Company entered into an option agreement with a private, arm’s-length party in November of 2020 to acquire a 100% interest in the project.

Philip Williams, CEO commented “Moran Lake is a perfect case study of our strategy for advancing projects in our portfolio. In most cases, the projects we are acquiring have significant past expenditure so step one is consolidating and analyzing all the historical data we can find. At Moran Lake our planned summer work program, while small in budget, will serve to maintain the project in good standing while at the same time provide useful information for determining the next steps for the project.  We are encouraged, although not surprised, to see other players take up positions in the Central Mineral Belt alongside Moran Lake. The area is prospective for both Uranium and iron oxide copper-gold (IOCG) mineralization and, in our view, any new discoveries will only serve to elevate the value of our project which already hosts historic uranium and vanadium resource estimates.”

The Project is located within the Central Mineral Belt of Labrador, approximately 140 kilometres north of the town of Happy Valley-Goose Bay and 85 kilometres southwest of the coastal community of Postville on Kaipokok Bay. Access to the Project is by helicopter and float plane out of Goose Bay.

Uranium was first discovered near Moran Lake by British Newfoundland Exploration Ltd. (Brinex), which conducted prospecting, geological mapping and radiometric surveying in the area from 1956 to 1958. The uranium mineralization is structurally controlled, typically hosted within fracture systems and to a lesser extent within shear zones. In outcrop, it is clear that local faulting, brecciation and alteration, all of uncertain age, are associated with the uranium-copper mineralization at the Moran Lake C zone. The mineralization is epigenetic and occurs in mafic volcanics of the Joe Pond formation, Moran Lake Group, as well as in overlying sedimentary rocks of the Heggart Lake formation, Bruce River Group.

In 2004, Crosshair Exploration and Mining entered an option agreement with prospectors to earn an interest in claims in the area including those being optioned by CUR. Crosshair conducted exploration between 2005 and 2012 ultimately abandoning the claims on Nov. 1, 2013.

The table below sets out the historical mineral resource estimates for each project CUR currently owns outright or on which it has announced an option agreement. The mineral resource estimate for each project is considered to be a “historical estimate” under National Instrument 43-101 – Standards of Disclosure for Mineral Projects (“NI 43-101”) and is not considered by the Company to be current.

The scientific and technical information contained in this news release was prepared by Peter Mullens (FAusIMM), CUR’s VP Business Development, who is a “Qualified Person” (as defined in NI 43-101).

Each of the above mineral resource estimates are considered to be “historical estimates” as defined under NI 43-101, and have been sourced as follows:

For Ben Lomond, as disclosed in the above noted technical report, the historical estimate was prepared by The Australian Atomic Energy Commission (AAEC) using a sectional method. The parameters used in the selection of the ore intervals were a minimum true thickness of 0.5 metres and maximum included waste (true thickness) of 5 metres. Resource zones were outlined on 25 metre sections using groups of intersections, isolated intersections were not included. The grades from the composites were area weighted to give the average grade above a threshold of 500 ppm uranium. The area was measured on each 25 metres section to give the tonnage at a bulk density of 2.603. The Company would need to conduct an exploration program, including twinning of historical drill holes in order to verify the Ben Lomond historical estimate as a current Mineral Resource.

For Georgetown/Maureen, as disclosed in the above noted technical report, the historical estimate was prepared by Mining Associates using a block model estimation methodology. Resource modelling was carried out on a database comprising 94,810 metres of combined drilling. Using a variety of estimation techniques, a 5x5x5 metre block model was constructed. This defined the shallow westward-dipping mineralisation mantos which contain the higher-grade zones. The Company would need to conduct an exploration program, including twinning of historical drill holes in order to verify the Georgetown/Maureen historical estimate as a current Mineral Resource.

For Mountain Lake, as disclosed in the above noted technical report, the historical estimate was prepared by F.R. Hassard, B.A.Sc., P. Eng. (Qualified Person) using the polygon method. The resource estimate was based on a minimum grade of 0.1% U3O8, a minimum vertical thickness of 1.0 metre. and specific gravity of 2.5. The Company would need to conduct an exploration program, including twinning of historical drill holes in order to verify the Mountain Lake historical estimate as a current Mineral Resource.

For Moran Lake, as disclosed in the above noted technical report, the historical estimate was prepared by C. Stewart Wallis P. Geo, Barry A. Sparkes, P. Geo., Gary H. Giroux, P. Eng. (Qualified Person) using three-dimensional block models utilizing ordinary kriging to interpolate grades into each 10m x 10m x 4m high block. For the purpose of the vanadium resource estimate, a vanadium specific model was created in the Upper C rock package above the C Zone thrust fault. The vanadium model is based on a wireframe solid defining the vanadium mineralized envelope using an external cut-off of approximately 0.1% V2O5. For the purposes of the estimates, a specific gravity of 2.83 was used. The Company would need to conduct an exploration program, including twinning of historical drill holes in order to verify the Moran Lake historical estimate as a current Mineral Resource.

For Laguna Salada, as disclosed in the above noted technical report, the historical estimate was prepared by Coffey Mining Pty. Ltd. using block models utilizing ordinary kriging to interpolate grades into each 1000m x 1000m x 10m parent cell. For the purposes of the estimate, bulk density of 1.7t/m³ was used for Lago Seco and 1.95t/m³ for Guanaco. The Company would need to conduct an exploration program, including trenching in order to verify the Laguna Salada historical estimate as a current Mineral Resource.

For Dieter Lake, as disclosed in the above noted technical report, the historical estimate was prepared by Davis & Guo using the Thiessen (Voronoi) polygon method. Data constraints used were 200 ppm, 500 ppm, and 1000ppm U3O8 over a minimum of 1 metre thickness. Polygons created had radii of 200 metres. A rock density of 2.67g/cm3 was used. The Company would need to conduct an exploration program, including twinning of historical drill holes in order to verify the Dieter Lake historical estimate as a current Mineral Resource.

In addition, the Company owns 80% of the Mt. Roe gold project located in the Pilbara region of Western Australia and an equity interest in Meliadine Gold Ltd., the owner of the Kuulu Gold Project (formerly

known as the Peter Lake Gold Project) in Nunavut.

This news release contains "forward-looking information" within the meaning of applicable Canadian securities legislation. “Forward-looking information” includes, but is not limited to, statements with respect to activities, events or developments that the Company expects or anticipates will or may occur in the future including the anticipated timing, scope and outcome of the summer filed program to be completed at the Project and the Company’s plans to complete a NI 43-101 compliance technical report with respect to the Project. Generally, but not always, forward-looking information and statements can be identified by the use of words such as “plans”, “expects”, “is expected”, “budget”, “scheduled”, “estimates”, “forecasts”, “intends”, “anticipates”, or “believes” or the negative connotation thereof or variations of such words and phrases or state that certain actions, events or results “may”, “could”, “would”, “might” or “will be taken”, “occur” or “be achieved” or the negative connotation thereof.

Such forward-looking information and statements are based on numerous assumptions, including that general business and economic conditions will not change in a material adverse manner, that financing will be available if and when needed and on reasonable terms, and that third party contractors, equipment and supplies and governmental and other approvals required to conduct the Company’s planned exploration activities will be available on reasonable terms and in a timely manner. Although the assumptions made by the Company in providing forward-looking information or making forward-looking statements are considered reasonable by management at the time, there can be no assurance that such assumptions will prove to be accurate.

Forward-looking information and statements also involve known and unknown risks and uncertainties and other factors, which may cause actual events or results in future periods to differ materially from any projections of future events or results expressed or implied by such forward-looking information or statements, including, among others: negative operating cash flow and dependence on third party financing, uncertainty of additional financing, no known mineral reserves or resources, reliance on key management and other personnel, potential downturns in economic conditions, actual results of exploration activities being different than anticipated, changes in exploration programs based upon results, and  risks generally associated with the mineral exploration industry, environmental risks, changes in laws and regulations, community relations and delays in obtaining governmental or other approvals.

Reader should also be cautioned that where reference is made to mineralization of adjacent or near-by properties it is not necessarily indicative of mineralization hosted on the Company’s Property.