MANSORY presents its customisation programme for the the Porsche Taycan 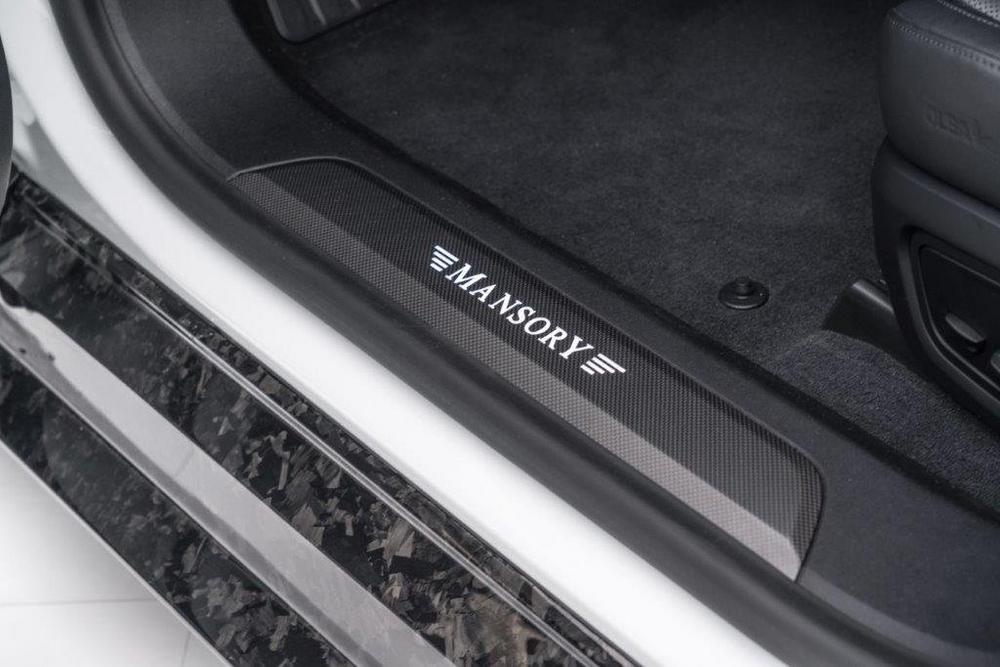 When Porsche presented its first electric sports car to the world public at the beginning of September 2019, the sports car manufacturer from Stuttgart-Zuffenhausen not only opened a new chapter in the company’s history, but also heralded a complete reorientation of the company at the same time.

The four-door Porsche Taycan as a battery-electric sports car was initially offered in the versions 4S, Turbo and Turbo S in combination with all-wheel drive. In the meantime another version, the basic Taycan, which is currently offered exclusively with rear-wheel drive, is also available.

The power spectrum of the Taycan ranges from 408 to 761 hp (each with Launch Control) and provides impressive torque values of 345 to 1,050 Nm.

In the familiar manner, the programme focuses on design, wheels and interior.

The sporty-elegant and at the same time dynamic-powerful appearance of the Taycan is accentuated all around thanks to numerous add-on parts made of "Forged Carbon" (other carbon design variants from the entire MANSORY carbon collection are also available on customer request) and sharpened in detail in its design language. The noble and exceptionally light material is therefore used on the front air intakes, below and to the side of the front apron, in the area of the headlights, on the sills, on the exterior mirrors, as an additional side strip on the front doors and the tailgate. The bonnet is made entirely of carbon. And also the rear apron is made entirely of "Forged Carbon" and available in two different versions for the Taycan: With and without an integrated third brake light in the centre of the diffuser.

As a conversion option in the "Wheels" area, light alloy rims of the type "Y.5" in the dimensions 10 x 22 (front) and 11.5 x 22 (rear) can be used. The one-piece cast wheels "Y.5" chosen for the Taycan combine sportiness and elegance at the same time. Narrow spokes also allow optimal dissipation of the frictional heat generated by the brakes and further emphasise the dynamics of the wheel and tyre combination.

Just like the rims themselves, the brake callipers of the high-performance brake system (regardless of whether standard, PSCB or PCCB) can be custom painted in any colour following the individual customer’s requests.

Alternatively, the "Y.5" rims are also available with a diamond-polished rim surface, which further emphasises the noble appearance of the Taycan in combination with this rim type.

As usual with every MANSORY customisation programme, the interior is also given special importance and attention.

Depending on the customer’s wishes, the entire interior is completely new and covered with the finest leather on every conceivable component. In addition, all seams can be changed to individual colours, such as those of the exterior paintwork. Various carbon inlays, a leather-carbon sports steering wheel, floor mats and an aluminium pedal set – all with discreet MANSORY logos – complete the refinement of the interior and set further visual accents.

For further information on this vehicle and all MANSORY refinement programmes, please visit the website at: www.mansory.com

Premium British cars and their special flair have always been a passion of owner and the man who gave his name to the company – Kourosh Mansory. This enthusiasm resulted in him spending several years in England and also led to a personal commitment to automotive values such as tradition, hand crafting and sophisticated technology. So right from the founding of the company in 1989, special attention was paid to the brands Rolls-Royce, Bentley, and Aston Martin. Nowadays, MANSORY devote the same attention to detail to individualising models from the brands Porsche, Lotus, Maserati, BMW, Mercedes-Benz, McLaren, Lamborghini and Ferrari, and they have established themselves as one of the largest, most highly regarded car individualisation companies in the world.

In the middle of 2001, MANSORY relocated their head office from the Bavarian city of Munich to Brand in the Fichtelgebirge Mountains. By taking over the tuning business area of the Swiss company Rinspeed AG, and setting up MANSORY Switzerland AG in November 2008, MANSORY expanded their product portfolio to include a range of accessories for Porsche cars. Refinement of the brands Range-Rover, BMW and Porsche will continue to be marketed under the brand MANSORY Switzerland. The Mannheim company AEV-Automotive GmbH has been part of the group since 2009. The exclusive interior design specialist supplies leading automobile and caravan manufacturers.

MANSORY now has a team of more than 250 employees and can fulfil nearly every automotive desire of its exclusive clientele. The company does this in Germany and worldwide through its selected distribution partners.