Defapp turns iPhone and Apple Watch into a bodyguard 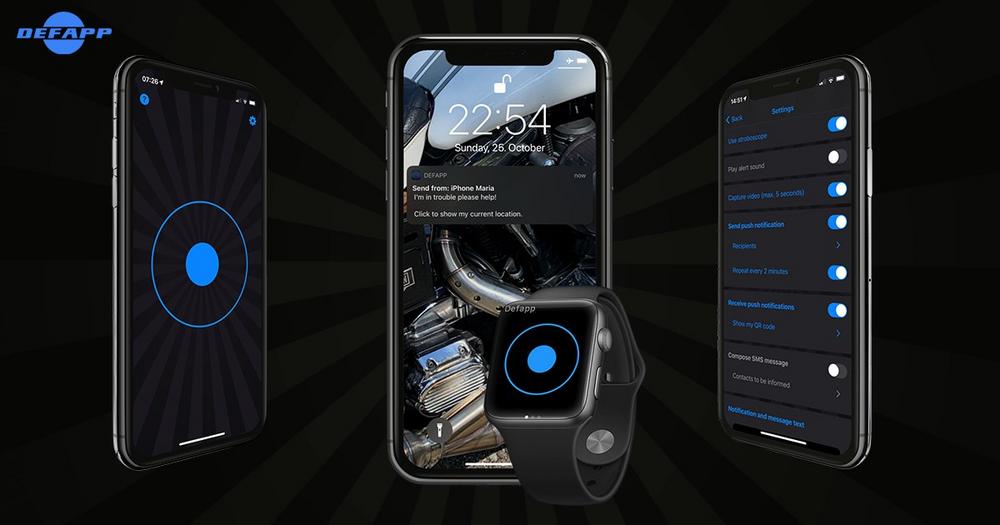 27. Juli 2021 Firma Defapp | Jens RemerFamilie & Kind.family, apple watch, bodyguard, crime, emergency, fear, help me, riot, safety, security, self defense, violence, violent crime, walk alone
No it was not a nice circumstance out of which Defapp arose. It was a good friend who was attacked and beaten up out of the blue in a park. She just wanted to go for a walk with her dog. As it turned out later, the perpetrator was a self-confessed dog hater who had already left behind several victims.

The question was how to effectively use something you always carry with you for self-defense? The result is Defapp, an app that was designed to be easy to use even under high stress levels. Thus, the entire screen on the iPhone and on the Apple Watch represents a single button and the screen does not lock until you consciously do it. Moreover, Defapp responds to the shake gesture and voice commands.

To operate Defapp even with high stress levels, the entire screen becomes a single button that responds to the following gestures:

– swipe in any direction to turn the flashlight on or off.

– tap twice to send one or more push help messages and/or create an SMS. Settings can be set to automatically send the message repeatedly or to add the current location.

– long touch or shake to start the defense mode. Defense mode includes all options that can be enabled in the settings.

The defense mode includes, in addition to the notification functions:

a flash light to irritate and blind a possible attacker,

the recording of a 5 second video for evidence.

This video can also be automatically added to the SMS.

– double tap to send one or more push help messages. Double tap and the message is sent immediately and, depending on the setting, repeatedly and including the current location.

This can also be started from the watch face and also works during sports or swimming, for example.

By voice command (also on the Apple Watch):

– to send a push help message including the current position. The iPhone doesn’t even have to be unlocked to do this. A short command such as "Hey Siri, help" is enough.

Who is Defapp suitable for?

Customer feedback indicates that Defapp is particularly popular with families. However, conceivable target groups also include people in need of help, athletes and, for example, security services.

Defapp is currently still available in the App Store completely free of charge and without advertising. To ensure operation and further development, a very affordable subscription model will probably be introduced at the end of 2021. The final price has not yet been determined, but it will be a low, single-digit amount.

Defapp is a small start-up that wants to make the world a little safer by developing innovative mobile apps. A violent crime in one’s own circle of acquaintances can be named as the trigger, where a product like Defapp could have helped.

Quality, reliability, ease of use and innovation are the main pillars that are fundamentally incorporated into the continuous further development of Defapp.

Here we can draw on over 25 years of experience in software development from industry and aviation.

Defapp is the abbreviation of "Defense App", which means that Defapp already carries its mission in its name and is becoming more and more popular.