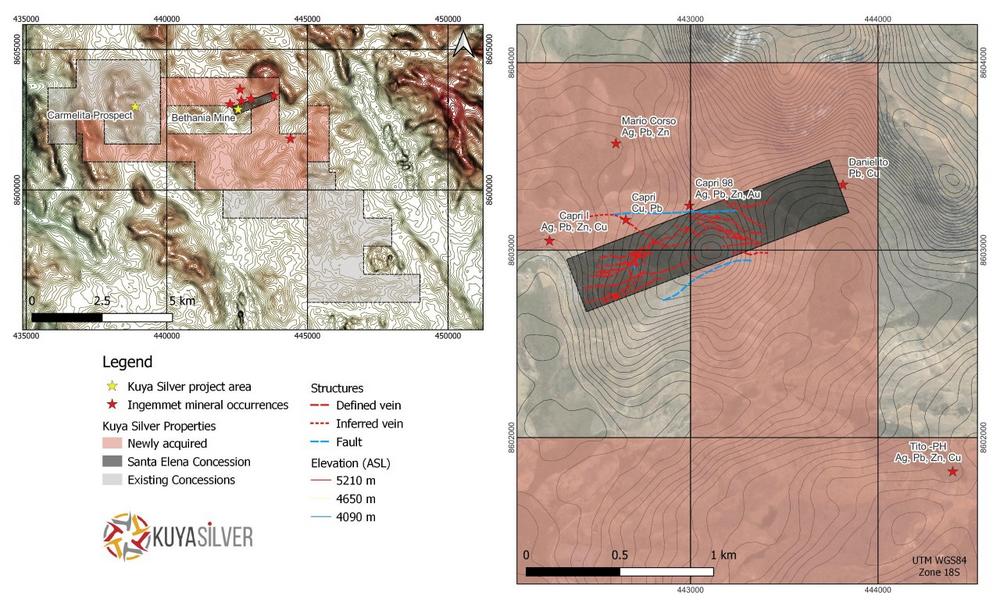 1. Dezember 20211. Dezember 2021 Firma Swiss Resource CapitalFinanzen / Bilanzenbethania, Copper, del, Exploration, Gold, kuya, market, mine, mineral, mineralization, silver, statements, vein, with, Zinc
Kuya Silver Corporation (CSE: KUYA) (OTCQB: KUYAF) (Frankfurt: 6MR1) (the “Company” or “Kuya Silver” – https://www.commodity-tv.com/ondemand/companies/profil/kuya-silver-corp/ ) is pleased to announce that it has expanded its Phase 2 exploration program to cover additional targets acquired as part of the recent claims auction announced on November 18, 2021. In particular, Kuya Silver expects to focus on extending the surficial definition of the veins in the Hilltop Zone to the north and south of the original Bethania mine property (Santa Elena concession), with additional mapping and surface sampling, as well as investigate showings previously identified in Peruvian government reports.

Mineralized veins previously discovered at the Hilltop Zone (see Figure 1), such as Española 2 and Mercedes, strike NW-SE and appear to continue onto the newly acquired claims. The Company also notes that several mineral showings, identified by Peruvian government geologists north of the mine area, are proximal to, and are along trend of, known areas of mineralization at Bethania.

The Capri 98 showing is described in Boletín No. 12 Serie B: Geología Económica – Estudio de Recursos Minerales del Perú Franja No. 3, published in 2003 by INGEMMET (Peruvian institute of Geology, Mining and Metallurgy), as being a mineralized, 0.6 m wide, east-west trending structure, which is similar to the principal veins in the Bethania system such as 12 de Mayo and Española. In the report, an outcrop sample assayed 702 g/t silver, 1.17 g/t gold, 10.2% lead, 2.6% zinc and 0.4% copper. The report does not contain a description of the type of analytical or testing procedures utilized, the sample size, or the name and location of any laboratory used.

David Stein, President and CEO of the Company remarked, “Kuya Silver has been monitoring these properties surrounding the Bethania mine for several years, as recent exploration has suggested that the mineralization at Bethania seems to extend beyond the boundaries of the original mine concession. We see the potential for the size of the Bethania silver vein system to be greater than initially thought and we are excited to be able to explore these adjoining claims as part of a larger Bethania project.”

The technical content of this news release has been reviewed and approved by Mr. David Lewis, P.Geo., Exploration Director of Kuya Silver and a Qualified Person as defined by National Instrument 43-101.

Kuya Silver is a Canadian‐based mineral exploration and development company with a focus on acquiring, exploring, and advancing precious metals assets in Peru and Canada.

Neither the Canadian Securities Exchange nor the Investment Industry Regulatory Organization of Canada accepts responsibility for the adequacy or accuracy of this release.