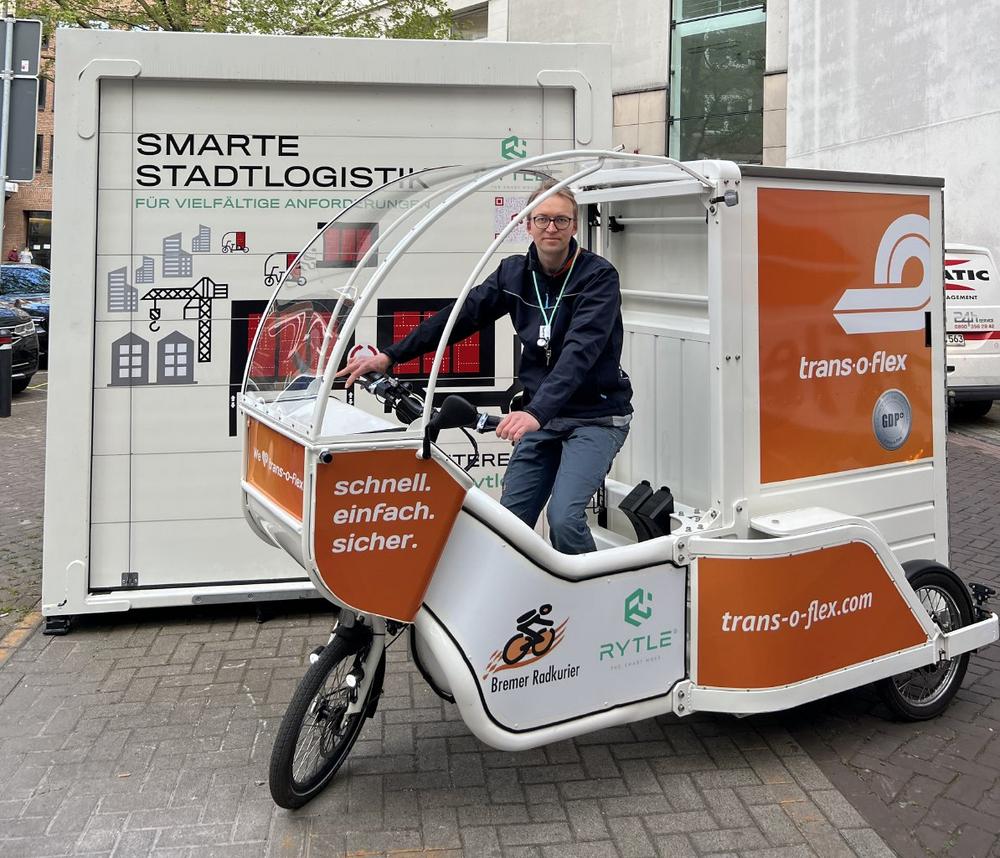 After a year of preparation, the express service trans-o-flex started a trial in Bremen’s city centre this month, lasting several months, in which two cargo bikes replace the previous delivery with classic vans in a defined postcode area. "It is clear that delivery by cargo bike is quieter and cleaner than the conventional use of vans and can contribute to urgently needed congestion relief, especially in the city centre," says Wolfgang P. Albeck, CEO of trans-o-flex. "But for them to be truly sustainable and thus economically efficient, cargo bikes need a completely new delivery system, where delivery can be made from a mini-hub, preferably in the delivery area. Otherwise, the routes for the cargo bikes become too long, and the cyclists can only deliver a disproportionately small number of items per day."

That is why trans-o-flex chose a system bicycle from the Bremen-based company RYTLE for its test, which can accommodate a box with around 1.4 cubic metres of loading space and a payload of 180 kilos. Nine of these boxes in Euro pallet format fit into a swap body in 10-foot format, which serves as a mini-hub. It has a fixed parking space in the Jakobikirchhof in Bremen. The system allows a truck to pick up either the entire hydraulically self-sufficient swap body or individual boxes to transport them back and forth between the parking space in the city centre and trans-o-flex’s logistics centre. This means that even pre-commissioned boxes can be delivered and the delivery cyclists then only have to push the box between the two rear wheels of the three-wheeled cargo bike, secure the box, and can immediately start on the delivery tour. In the test, the delivery drivers first use the mini-hub as a transshipment point where they load the delivered parcels into the box themselves and then deliver them. Once a driver has delivered all the items, he returns to the mini-hub and can either exchange the empty box for a full one in less than five minutes or load it manually again and then start again. "It is also possible for drivers to pick up consignments on the way," explains Albeck. "The driver then brings them to the mini-hub." In the evening, the parcels are taken to the nearest trans-o-flex logistics centre. From there, the collected consignments go on their journey to the recipient the same day. The next morning, the mini-hub is again supplied with new shipments from the logistics centre.

The cargo bikes used have two electric motors. They are built into the rear wheels and support the riders up to a speed of 25 km/h. "Since the distances covered by the cargo bikes are very short, they will probably cover less than 20 kilometres per day in Bremen." Thanks to exchangeable batteries, however, the drivers have enough energy for much longer delivery tours without having to recharge during the day.

The system that trans-o-flex is trialling is not yet designed for the delivery of actively temperature-controlled consignments. "However, one of the reasons we chose Rytle as a partner was because the company is working on concepts for how its system can also be used to deliver temperature-sensitive items," says Albeck. "If the current trial proves successful, a possible expansion stage may therefore be the delivery of consignments in a specific temperature range." As a logistics partner to the pharmaceutical and healthcare industries, with their numerous temperature-sensitive consignments, trans-o-flex offers nationwide actively temperature-controlled transport at 2 to 8 degrees and 15 to 25 degrees Celsius within 24 hours. "Reliable compliance with the respective temperature range, including the associated documentation via a complete temperature history, is an indispensable part of our service. Delivery by cargo bike must also be able to do this over time."

This is especially true against the background of the ever-increasing requirements for actively temperature-controlled deliveries of pharmaceutical consignments, especially in the private customer sector. trans-o-flex is continuing to expand this segment and has developed its new B2C-Pharma service for this purpose, in which private consignees receive their medicines as consignments with active temperature control.

RYTLE GmbH was founded to revolutionise city logistics. The joint venture of the Krone Commercial Vehicle Group and the strategic management consultancy Orbitak combines many years of experience in logistics with sophisticated knowledge in the areas of cargo bikes, automotive and IT. The logistics concept created by experts from RTYLE, consists out of a self-sufficient mobile HUB, an electrically operated cargo bike with an exchangable function for standardized transport boxes – the RYTLE MovR – as well as appropriate software and is already used worldwide. With the available products, costs can be saved on the last mile and goods of all kinds can be transported almost emission-free – efficient, punctual, quiet, stress-free, flexible and transparent.

trans-o-flex’s core areas of expertise are logistics solutions for the healthcare, cosmetics and consumer electronics industries and other high-end, sensitive goods. The company has built up transport networks to carry goods throughout Germany and Austria at 15 to 25 degrees Celsius or 2 to 8 degrees Celsius actively temperature-controlled and documented in accordance with EU regulations for healthcare transport. These EU-GDPs require the highest standards for safety and security, cleanliness, reliability and transparency, from which all trans-o-flex customers benefit. trans-o-flex operates internationally via the networks EUROTEMP (temperature-controlled logistics) and EURODIS (in 36 European countries). In contrast to parcel and groupage services, trans-o-flex delivers parcels and pallets on a consolidated basis. trans-o-flex Express offers numerous express and time-slot deliveries, special services such as hazardous goods transportation (without minimum quantity regulation), consignment consolidation and direct deliveries. The range of services is complemented by warehousing, order picking and individual value-added services such as serialisation and deserialisation of pharmaceuticals. This means that the company covers the entire logistics chain from procurement through to fulfilment. The annual turnover of the trans-o-flex companies, which employ a total of around 1,954 people (FTEs, end of 2020), amounted to around 515 million euros in 2020. More information is available at www.trans-o-flex.com