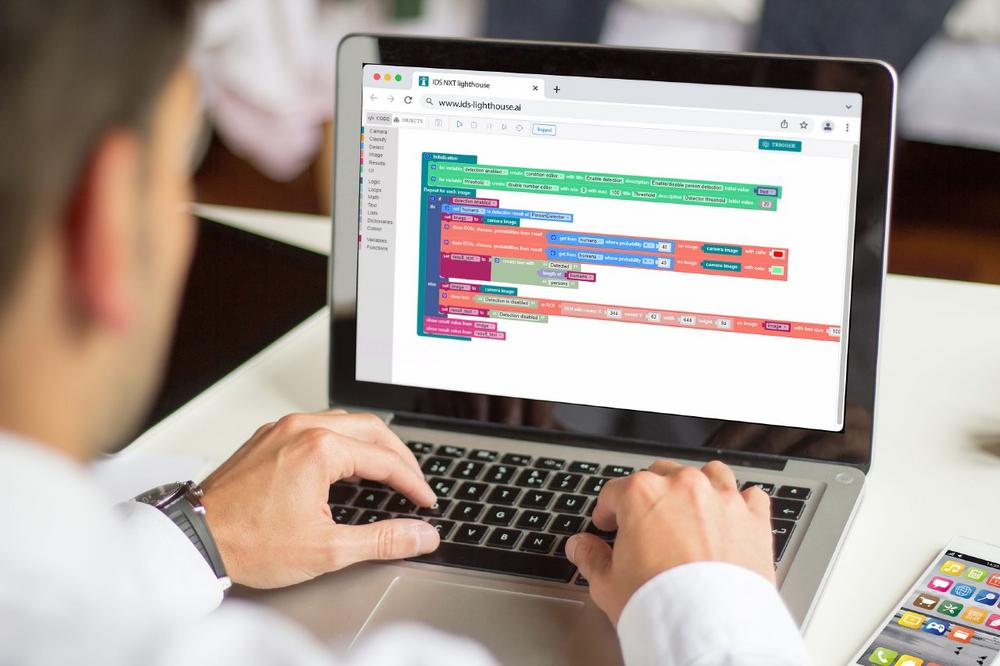 24. Mai 202221. Juni 2022 Firma IDS Imaging Development SystemsOptische TechnologienAI, app, Artificial Intelligence, camera, ids, image processing, industrial camera, industrial vision, machine vision, nxt, plattform, software
The current software release 2.6 for the AI vision system IDS NXT focuses primarily on simplifying app creation. The initial phase in development is often one of the greatest challenges in the realisation of a project. With the help of the new Application Assistant in IDS NXT lighthouse, users configure a complete vision app under guidance in just a few steps, which they can then run directly on an IDS NXT camera. With the Block-based Editor, which is also new, users can configure their own program sequences with AI image processing functions, such as object recognition or classification, without any programming knowledge. Users create simple sequences in a few minutes with this visual code editor without having to know the syntax of a specific programming language.

With the Use Case Assistant, IDS supports users in creating Vision App projects. They simply select the use case that fits their project. With queries and tips, the assistant guides them through the process of creating the Vision App project and creates the code, just like in an interview. It links existing training projects with the vision app project or creates new training projects and data sets in IDS NXT lighthouse if required.

With the combinable blocks and the intuitive user interface of the Block-based Editor, anyone can realise their own projects using AI-based image processing (such as object detection or classification) as an individual vision app without having to know the syntax of a specific programming language. Using the predefined blocks of the code editor, users build their vision app graphically, including processes such as loops and conditional statements. How this works is demonstrated, for example, in the IDS Vision Channel (www.ids-vision-channel.tech). The session "Build AI vision apps without coding – xciting new easyness" is available for viewing as a recording.

IDS NXT is a comprehensive system with a wide range of workflows and tools for realising your own AI vision applications. The intelligent IDS NXT cameras can process tasks "OnDevice" and deliver image processing results themselves. The tasks of the cameras are determined by apps that are uploaded to the cameras and executed there. Their functionality can thus be changed at any time. This is supported by software such as IDS NXT lighthouse, with which users can not only train neural networks, but now also create their own vision apps. The system offers both beginners and professionals enormous scope for designing AI vision apps.

Since its foundation in 1997 as a two-man company, IDS has developed into an independent, ISO and environmentally certified family business with around 350 employees. The headquarters in Obersulm, Germany, is both a development and production site. With branches and representative offices in the USA, Japan, South Korea, the UK, France and the Netherlands, the technology company is also globally represented.