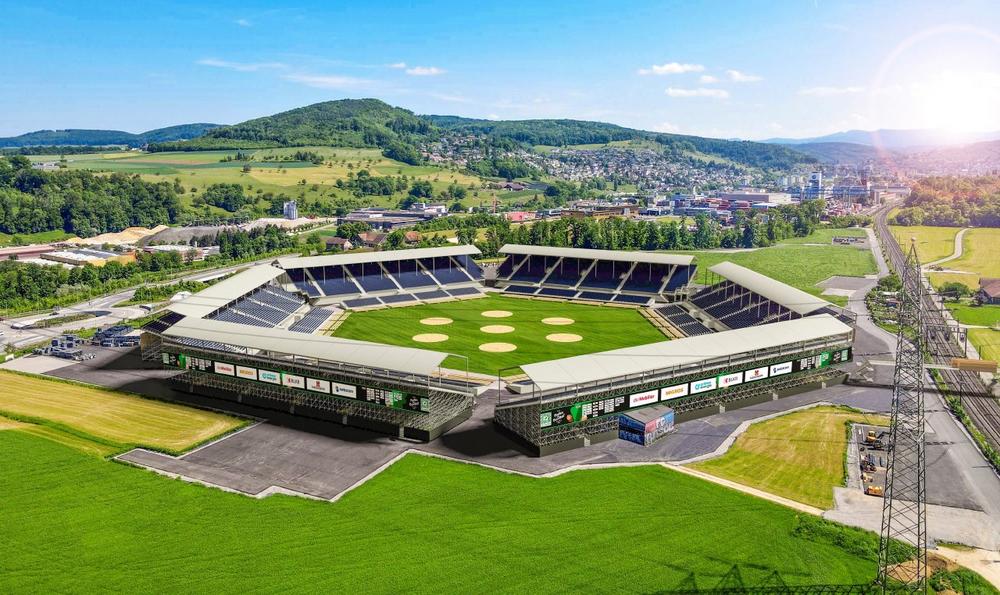 30. Juni 2022 Firma NÜSSLIMedienasset, cities, concept, esaf, festival, Gstaad, guests, nüssli, Pride, seating, swiss, Tattoo, with, world, wrestling
The first time in 1961 in Zug and since then, without interruption, NUSSLI’s construction of the arena has contributed to the "Eidgenössische" (Swiss Federal) and its unforgettable moments at the festival filled with customs, excitement, and great encounters. For the Swiss Federal Wrestling and Alpine Festival (ESAF), which will take place from 26 to 28 August 2022 in Pratteln in the Basel region, NUSSLI is planning and building the festival arena as a temporary structure for the 22nd time.

"The hexagonal festival arena – with a circumference of 800 m, a diameter of 250 m and a roof height of 17.5 m – will offer 50,900 spectators a view of the sawdust rings this summer with covered and uncovered seating and standing space," explains project manager David Frei. For the construction of the six grandstands, in total approx. 3,000 tons of grandstand material, consisting of the substructure, roof elements and seats, are needed. It all arrives on site in the form of 300,000 individual components, one by one, all in time to be assembled. The temporary construction method is sustainable thanks to the reusable construction elements, and this allows the arena to be flexibly adapted to the conditions on site. Many of the elements used were already part of the arena at an earlier "Eidgenössisches" (Swiss Federal).

Vital for the project’s success: a carefully developed logistics concept
For short and efficient transport routes, the NUSSLI logisticians use a large part of the material before and after the wrestling festival in the closest projects in Switzerland, such as at music festivals and sporting events, such as the Wrestling Festival in Balterswil, the beach volleyball tournament in Gstaad and the Basel Tattoo. Nevertheless, certain crucial components, such as staircase and roof elements as well as the NUSSLI Premium Grandstand, which is used by the VIP guests at the ESAF, are transported to the construction site from the surrounding branches abroad and major international projects. A logistical puzzle that is also especially challenging since the grandstand materials that are installed first are planned for the wrestling festival in Pratteln for 2.5 months and can only be used again after they’ve been dismantled; this means that it they are not available for numerous summer events.

Arena construction with the army’s help
Construction work on the festival site will begin in mid-June 2022. The ten-member NUSSLI project team are receiving support with the construction work. The Swiss Army and Civil Defence are helping the project team to set up the arena. At peak times, there are up to 300 helpers directly involved in the construction process. Certain aspects of the festival site require particular attention during the construction work: the high-voltage power line in the north, the railway line to the west and an anti-tank terrain obstacle. Classified by the federal government as "worthy of military-historical protection", the tank barrier must be preserved as far as possible during the grandstand construction. However, in the area of escape paths, for example, where it would not be possible to build over these for safety reasons, a few blocks are removed. To connect the Athletes‘ Village, located to the west of the train line, with the festival site, a temporary pedestrian bridge will be built over the train tracks.

One of the biggest temporary stadia in the world for two festival days
Not only the precisely coordinated logistics and the detailed planned assembly meet the highest requirements. A project the size of the ESAF festival arena is challenging in many respects and requires comprehensive planning and thorough preparation. "Switzerland’s biggest sporting and cultural event is closely linked to NUSSLI’s company history. For the 22nd time, NUSSLI is building the arena – the centerpiece of the "Eidgenössische"(Swiss Federal). And just as the ESAF has grown to become a lively cultural asset over the decades, NUSSLI has also grown alongside the higher technical, logistical, and conceptual demands for more than 61 years," says Andy Böckli, CEO of the NUSSLI Group, with pride.

Years prior to the event, NUSSLI prepared feasibility studies and rough plans for the candidate cities. More detailed plans, quotations, and assembly plans for the Pratteln venue in the Basel region followed later so that the arena could finally be built in the timespan of just nine weeks.

And on Monday, right after the wrestling king is crowned, the crews will already start dismantling the arena. Within a month or so, the 300,000 individual parts of the grandstands will be shipped off once more into different directions on their way to the upcoming events.