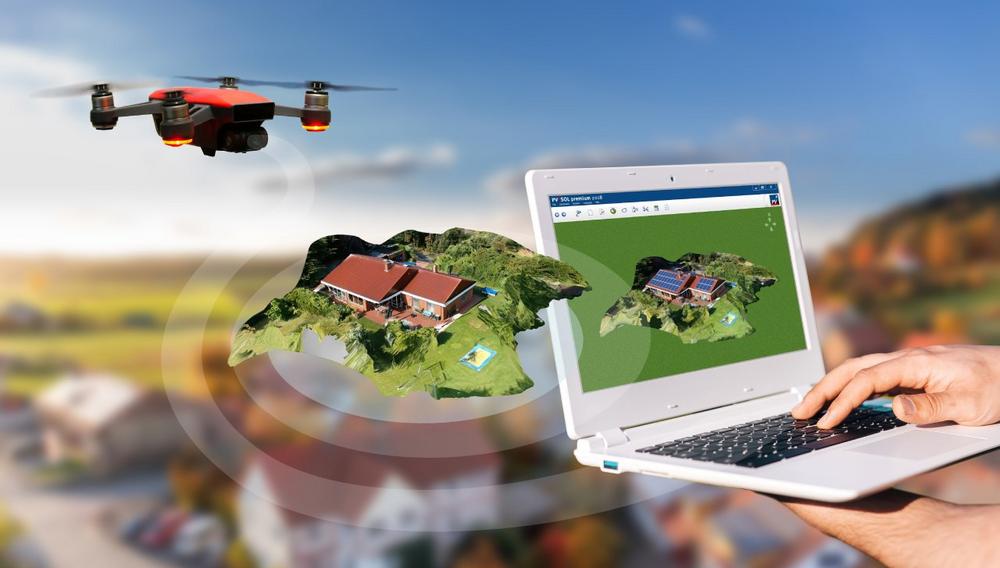 21. November 2017 Firma Valentin SoftwareSoftwarebattery, connect, drone, electric, energy, new, photovoltaics, power, PV, roof, satellite, series, solaredge, storage, tigo, tracker, with
For the input of object data, 3D models in different file formats can now be imported into the software via a new interface. This makes it possible to import realistic and detailed 3D objects created with photos taken from different perspectives (e.g. using a drone). This will add another important tool to the already existing possibility of importing floor plans, cadastral maps and screenshots from web-based satellite maps (e.g. Google Earth) directly into the 3D visualization and thus integrating them to scale into a project.

Flexibility has been significantly increased with regard to the subsequent configuration of the modules, which are automatically placed on an object. The new possibility of polystring configuration allows completely different strings to be connected parallel or in series to an MPP tracker. This is required, for example, to connect an east-west roof parallel to one MPP tracker. Even different modules in a string can now be interconnected, e.g. defective modules that are no longer available which need to be replaced by similar new ones. Modules with different orientations can now also be connected in one string via the integration of power optimizers (e.g. SolarEdge, Tigo). These new functionalities increase the flexibility of the design process enormously and allow even more detailed configuration and simulation of the PV system.

Other useful additions for the optimization of a system are the output of the I-V characteristics for each time step of the simulation, as well as an energy flow diagram representing the overall system including the battery system, consumers and also an electric vehicle.

As Valentin Software’s Managing Director Steffen Lindemann explains, "The combination of PV, storage and battery systems increases the complexity of a PV system. With the new energy flow diagram, the customer can be clearly shown from where each individual kWh in the PV system comes and where it goes."

Valentin Software GmbH has been in business for over 25 years. With the PV*SOL, T*SOL and GeoT*SOL brands for dynamic simulation, design, yield and profitability forecasts for photovoltaic, solar thermal and heat pump systems, the Berlin-based software company has made a name for itself as a world leading provider of innovative design software for sustainable energy supply. Its customers include engineers, system designers, architects, installation technicians, trades and manufacturing companies in the field of electrical, heating and building technology.