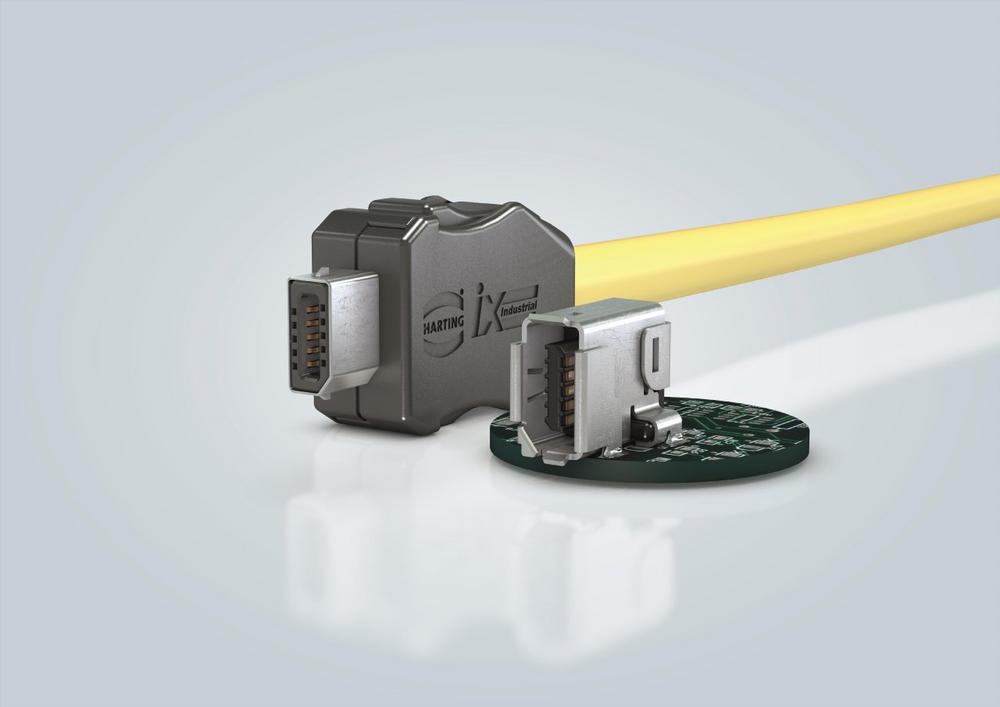 The little giant Captain ix is the face for the ix Industrial® connector, which is 70 percent smaller compared to the RJ45. At the same time, it is more robust and resistant to vibrations and other mechanical stresses. In this way, HARTING makes it easier for equipment manufacturers to use their increasingly smaller camera systems, control units, sensor/actuator systems and industrial computers in a more space-saving and process-safe manner in industrial applications and rail vehicles.

The connector thus meets the need for miniaturisation and provides network users with both power and data via PoE/PoE+. A small but robust socket with five THR shield contacts is available for device integration. This ensures maximum stability on the circuit board and it can be processed in the normal reflow process with other SMT components.

At SPS IPC Drives, the ix Industrial® connector will be available for viewing in two versions on the HARTING stand. In addition to the GBit version to be shown, HARTING also presents a B-coding for Fast Ethernet will also be presented whose two fewer pins save even more space in small applications.

In order to meet our claim as specialists for field cabling, HARTING will also be presenting a field-mountable version in addition to the previously known fixed connection composed of cables and connectors.

Digitisation at the field level is simply the goal of connecting the final corners of industrial production to a unified Ethernet network. This is a bold plan that requires the right connection technology: devices and applications of all kinds are getting smaller and smaller and need to be supplied with data and power via a single, miniaturised interface. In many cases, long-established connectors are just too big for this task.

HARTING’s little heroine Miss M8ty won’t leave users and equipment manufacturers in the lurch, and wins points for its miniaturised, powerful and robust solution – the M8 D-coded. With overmoulded cables and device-side sockets right up to the circuit board, not only are individual components available, there is a complete M8 D-coded solution for Ethernet from the Cloud to every sensor, just in time for SPS IPC Drives.

Featuring 100Mbit and PoE, Miss M8ty supplies power and data down to the last corners of the field level. Its rough shell defies any and all opponents which stand in the way of the secure transmission of bits and bytes. Boasting protection class IP67, it stands impervious to water and dust, and is shielded against EMC from other field devices according to ISO 11801. This is the prerequisite for fast Ethernet transmission. And it’s no problem for our little heroine.

To date, two wire pairs have been used in the industrial sector for the dominant Fast Ethernet. Here, one wire pair functions as a transmission line and the other as a receiving line for 100BASE-TX. With the transition to Gigabit Ethernet 1000BASE-T, four wire pairs are now used for bidirectional parallel data transmission. This enables a data stream of 250 Mbit/s per pair and is connected e.g. via X-coded M12.

The small hero Tw1ster, on the other hand, supports 1GBit/s Ethernet with only a single pair of wires. The new standards IEEE P802.3bw for 100BASE-T1 and IEEE P802.3bp for 1000BASE-T1 also stand for this. They each define a transmission channel via an unshielded twisted pair of wires with a length of up to 15 m for passenger car on-board networks and, via shielded cabling, of up to 40 m for automation and application in the railway and aerospace industries.

Since the majority of installed cabling in automation is less than 40 m, this length limitation is no reason not to use this technique in the place of existing bus systems. The one-pair Ethernet system makes it possible to extend into areas that to date could not be reached due to technical and cost-related reasons. In future, Ethernet will be usable from the Cloud down to the last sensor and actuator. The digitisation of the industrial sector will see Ethernet, especially T1 Ethernet, play a prominent role.