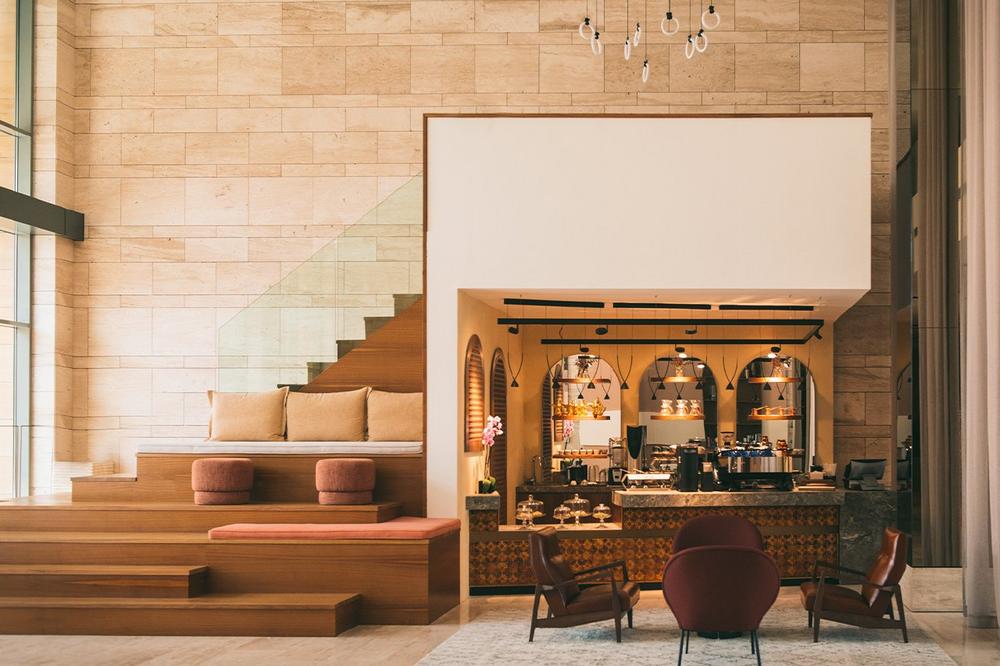 Reimagining what it means to live, work, visit, and relax in the Saudi port city, The House Hotel Jeddah City Yard is a five-star design boutique property where lifestyle and community seamlessly co-exist, and its opening marks the Middle East debut of The House Hotels, a Kerten Hospitality’s lifestyle brand. Working with City Yard Center owners Pure Houses, Saudi architect Ayman AlMehmadi designed a minimal low-rise building with materials that reflect regional culture, such as the sandstone used for the property’s façade, while local patterns have also found a new contemporary language in the entire piazza’s blueprint. The City Yard Center itself has been divided into three distinct sections, with a harmony created between the hotel and its lobby, a centralized piazza, and an interior street, while expansive outdoor spaces that breathe life into the entire area are accented with mature orange and olive trees and rounded out with a central water feature.

Inside The House Hotel Jeddah City Yard, David Hodkinson and Luc Lejeune of the Athens- and Saigon-based Studio Noor have overseen the interior design, with guestrooms and public spaces defined by an aesthetic born from their deep research on Saudi culture, materials, patterns, colors and crafts. Spaces are adorned with marble, bespoke furniture, and artworks made by local artists. The result is a carefully choreographed aesthetic that offers striking impressions that are both comfortable and cozy in nature, such as in the lobby, where a theatrical effect is established through a custom staircase-cum-lounge, double-height ceilings, intimate mezzanine divan seating, and a coffee nook. Additionally, the central staircase is one of many elements reflecting the fact that the property is the first in the country to integrate recent social and cultural movements: The feature is a modern reinterpretation of the traditional majlis. More than stairs, this corner also offers seating areas and it will eventually also host DJs and live music— something that just a few years ago was an unfamiliar sight inside hotels.

In the hotel’s accommodations, each of the 101 rooms and 13 suites are outfitted with custom furniture, including oversized daybeds and high-quality walnut features in headboards, wardrobes, cabinets, wall panels, and credenzas. Suites feature marble bathrooms, rain showers, and enviable standalone soaking tubs, and every room is stocked with all-natural, essential oil–based toiletries packaged in recyclable containers. The property is also home to a space for networking and collaborations as well as health and wellness areas, including a spa, a gym, and a rooftop pool that overlooks the Jeddah skyline and is lined with olive trees, mirroring those in the piazza.

Beyond the hotel, the City Yard Center is also home to 14 unique dining and beverage outlets that provide a gourmet journey across the world for breakfast, lunch, and dinner. Standouts include Al Sayed Seafood Restaurant, one of the oldest fish restaurants in Saudi Arabia, where the menu offers a gastronomic excursion into local seafood traditions that preserve flavors of the past, and Akiba Dori Restaurant, where several food and drink vendors serve dishes ranging from modern takes on Japanese street food to Tokyo-style Neapolitan pizzas. Elsewhere, the award-winning Baker & Spice makes an impact with a focus on local, organic cuisine, while Hejazi, a contemporary restaurant concept, celebrates Jeddah’s historical district, Al-Balad.

Guests are also encouraged to explore Al Rawdah, the upscale, central, and vibrant district surrounding City Yard Center. On offer are a number of curated experiences, including a tour for art lovers through the neighborhood’s galleries, while history aficionados can visit the nearby Abdul Raouf Khalil Museum. The City Yard Center is additionally set to become known for its extensive community program, with farmers’ markets, pop-up shops, and music and art events all in the pipeline. The House Hotel Jeddah City Yard is conveniently located only 13 kilometers from the King Abdulaziz International Airport, making it an easy-to-reach destination.

Design Hotels™ represents and markets a curated selection of over 300 independent hotels in more than 60 countries across the globe. More than a collection of hotels, the company is a collection of stories. Each property reflects the ideas of a visionary hotelier, an "Original", someone with a passion for genuine hospitality, cultural authenticity, thought-provoking design and architecture. Each "Original" stands for the individual, aesthetic and service-driven experience that his or her hotel provides.

In 2017, Design Hotels™ launched Further, a traveling laboratory for experiential hospitality that transforms hotels across the globe into temporal hubs of thematic exploration. The mission behind Further aligns with the values of the future-facing Promad, a new generation of traveler embracing progressive travel and global nomadism. First identified by Design Hotels™ in collaboration with leading futures consultancy The Future Laboratory, the purpose-driven, self-actualizing Promadic movement is set to shape the future of hospitality.

Founded by Claus Sendlinger in 1993, Design Hotels™ offers its members insightful travel industry knowledge, from market trend consultancy to international sales representation. The company has its headquarters in Berlin and branches in London, Los Angeles, New York and Singapore. In 2019, Design Hotels™ joined forces with Marriott Bonvoy, enabling its member hotels to have both a greater and more selective reach while offering its Community the benefit of the industry’s leading loyalty program.