Only 7 percent of global crops is used for biofuels production 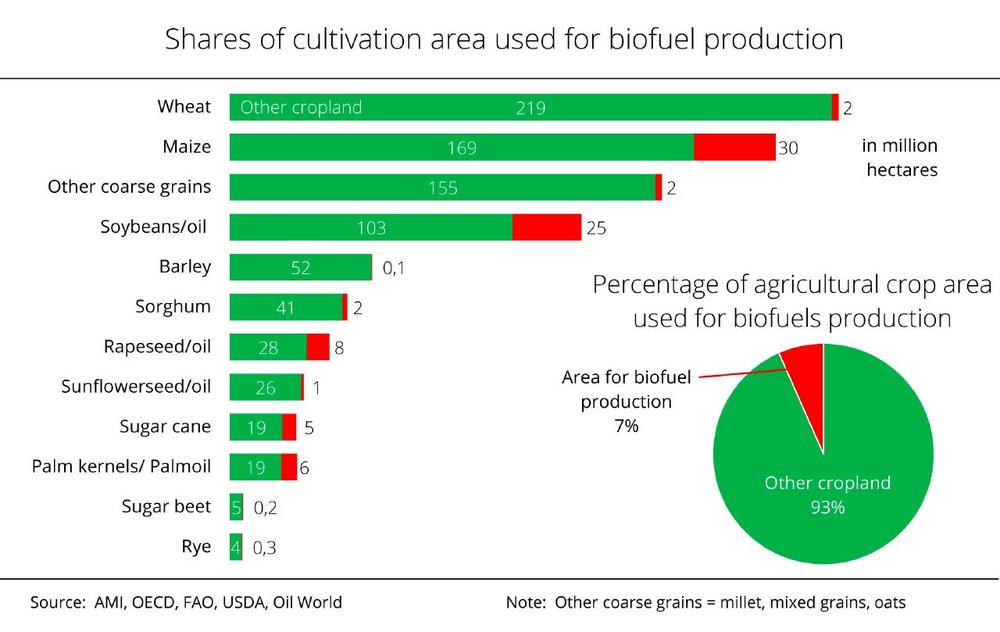 Biofuel production is mostly located in countries where there is already a surplus of feedstock (especially maize, soy and palm oil) and legally prescribed blending obligations. If the surplus were not used to produce biofuels, it would have to be placed on the global market, where it would weigh heavily on feedstock prices. The use in biofuel production reduces the production overhang, generates extra value added and reduces the need for foreign currency for imports of crude or fossil fuels. This is primarily a problem in poorer countries.

Another advantage is the amount of high-quality protein feed that is generated in biofuel production, demand for which is steadily increasing. The amount and quality of these protein feeds have a strong influence on feedstock prices. Consequently, they also determine the amount of land dedicated to growing the feedstocks. In other words, biofuels are by no means the price drivers in the commodities markets. If necessary, the feedstocks grown for biofuel production are primarily available for food supply. In the case of politically motivated extensification, the EU Commission is currently pursuing with its reduction strategy for fertilizers and plant protection products as part of the "Green Deal", this option for "buffering" food demand would be omitted.

The Union for the Promotion of Oil and Protein Plants e. V. (UFOP) represents the political interests of companies, associations and institutions involved in the production, processing and marketing of domestic oil and protein plants in national and international bodies. UFOP supports research to optimise agricultural production and for the development of new recycling opportunities in the food, non-food and feed sectors. UFOP public relations aim to promote the marketing of domestic oil and protein plant end products.